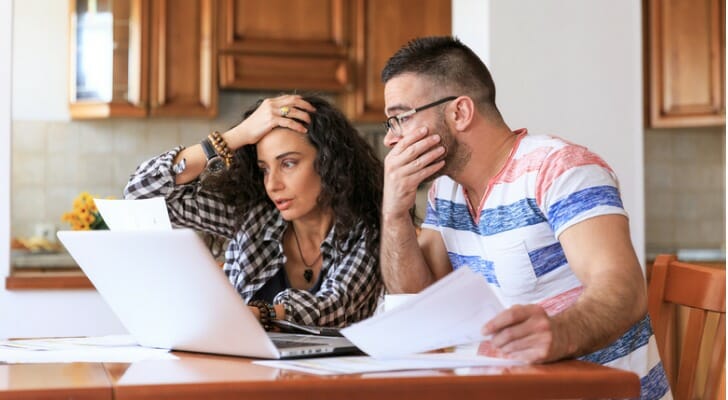 For Americans who are serious about tackling their debt, we have run the numbers to find the best places to get out of credit card debt. We created a credit card pay off model using the latest credit card debt data, SmartAsset’s income tax calculator, rent data and median income data. To see where we got our data and better understand our model, check out our data and methodology below. 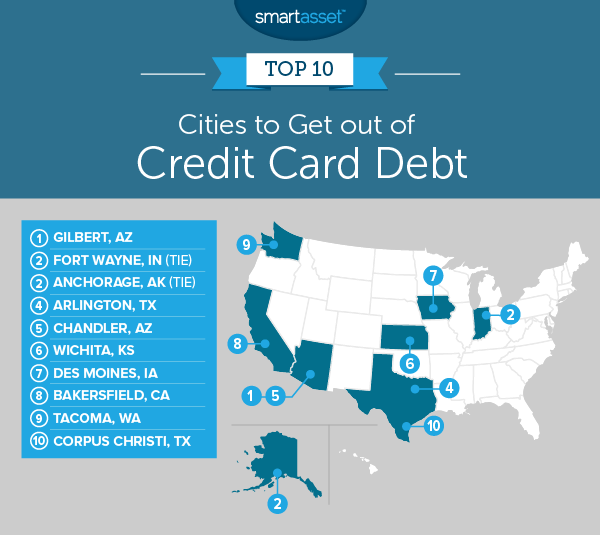 Gilbert, Arizona has jumped one spot since last year. In total we estimate that it would take someone 6.83 months to get out of debt here. The reason Gilbert ranks first is the high average salaries high school graduates earn. The average resident with a high school degree earns nearly $40,000 per year. Of that, $7,144 goes to federal income tax, Arizona  income tax and local sales tax. That means, assuming someone here would spend 50% of their disposable income on debt, they could afford a monthly debt payment of $872.

One way Gilbert residents could pay off their credit card debt faster is if they lowered their interest rate by improving their credit score.

You can find very affordable rent in Fort Wayne, Indiana. Our data shows that affordable apartments can be rented for only $5,600 per year. That leaves residents with plenty of disposable income to throw at their credit card debt.

The reason Fort Wayne falls behind Gilbert is the low average salary. The average high school graduate in Fort Wayne takes home less than $30,300 per year.

Last year, Anchorage was the top city to pay off credit card debt. This year, it’s tied for second. Despite its high school graduates having higher incomes, Anchorage ends up tied with Fort Wayne because of higher taxes and rent.

The Census Bureau shows that lower quartile rent costs in Anchorage are over $11,100 per year. We estimate taxes in Anchorage including Alaska state income tax would cost over $5,700.

However, thanks in part to the lack of Texas state income tax, a high school graduate here could expect to pay only $2,340 in taxes which helps increase their disposable income.

Chandler is the second city within the Phoenix metro area to claim a spot in this top 10. The cost of living here is relatively high by the standards of our study. We estimate that a high school graduate in Chandler would be paying nearly $16,700 per year in taxes and rent costs.

Wichita is another great landing spot for people looking to pay down credit card debt. All factors considered it would take just over 7.5 months for a high school graduate to pay off $5,644 in credit card debt, assuming they dedicated half of their disposable income to it.

The main reason Wichita looks so good in our model is the low rent costs. Affordable rent here can be found for under $5,500 per year.

One cost holding Des Moines back from rising up the ranks are the relatively high taxes. We estimate the average worker earning $31,500 per year could expect to pay around $5,900 in taxes, or about 19% of their income. This city ranks last for percent of income going to taxes.

After about 7.7 months of paying $778 to debt, a high school graduate in Bakersfield would be free from credit card debt.

Tacoma takes ninth. Our model predicts a high school graduate could pay off $5,644 in credit card debt in less than eight months. They would need to spend half of their monthly disposable income which is equal to $760 per month.

In total the average high school graduate earns $31,600 per year, and has about $18,250 in annual disposable income after paying taxes and rent costs.

We estimate that just under eight payments of $759 would be enough to pay off the average credit card debt. In our model, a high school graduate would end up paying $350 in interest on top of their $5,644 worth of credit card debt.

Corpus Christi residents who would prefer to have professional help managing their finances might find it useful to work with a financial advisor in their area. 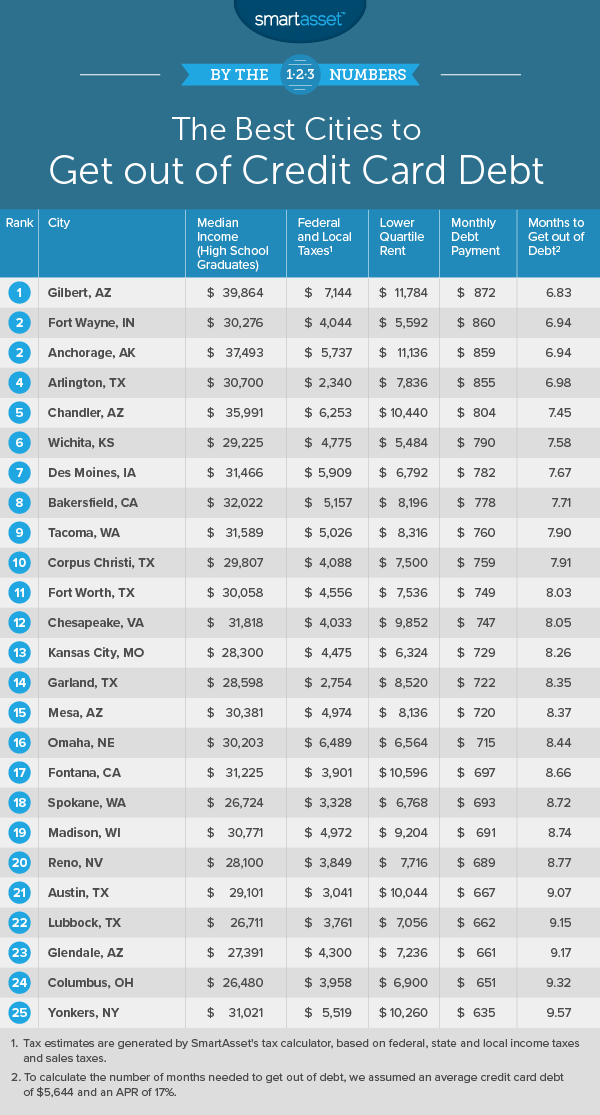 In order to find the best places to pay off credit card debt, we created a credit card debt payment model for 59 cities. To create our list of cities, we only included cities which had a population of at least 200,000. We also excluded any city which had a below-average unemployment rate among high school graduates who have no further education.

To complete the analysis, we first calculated the amount of disposable income a high school graduate could have in each city, assuming they earned the median salary for high school graduates with no further education. Using SmartAsset’s income tax calculator we found the after-tax income for local high school graduates. We then subtracted the annual lower-quartile rent. The lower quartile-rent is the lowest number under which 25% of renters pay for rent.

We then assumed that high school graduates would dedicate half of their disposable income to credit card payments. Using that figure, we calculated how long it would take to pay off $5,644 worth of credit card debt, which was the average amount held in the fourth quarter of 2017, according to a TransUnion report. We also assumed they would be paying interest of 17%, which was the average according to Bankrate analysis.