Best Places for Outdoor Enthusiasts to Live and Work – 2020 Edition 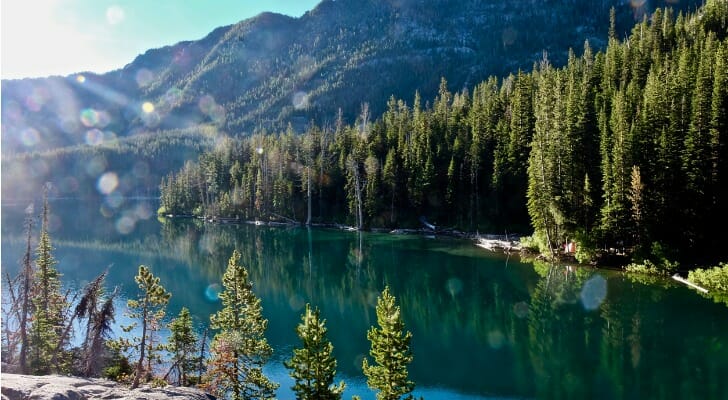 The COVID-19 pandemic has made many indoor activities difficult or impossible amid government ordinances. Since allocating some savings towards theater tickets and sporting events is now out of the question, a significant number of people are instead turning to the great outdoors for recreation. In fact, 43% of Americans 13 and older said they’d be committed to doing more outdoor activities like hiking, visiting parks and fishing as a result of coronavirus social distancing advisories, according to polling and consumer insights company CivicScience. With that in mind, SmartAsset decided to find the best places in America for outdoor enthusiasts to live and work.

To conduct this study, we compared 96 cities across the following metrics: housing costs as a percentage of income, five-year change in median household income, July 2020 unemployment rate, percentage of commuters who walk or bike to work, nature parks and campgrounds per 100,000 residents, air pollution, percentage of the city that is parkland, state outdoor recreation economy and state and national park coverage. For details on our data sources and how we put all the information together to create our final rankings, check out the Data and Methodology section below. 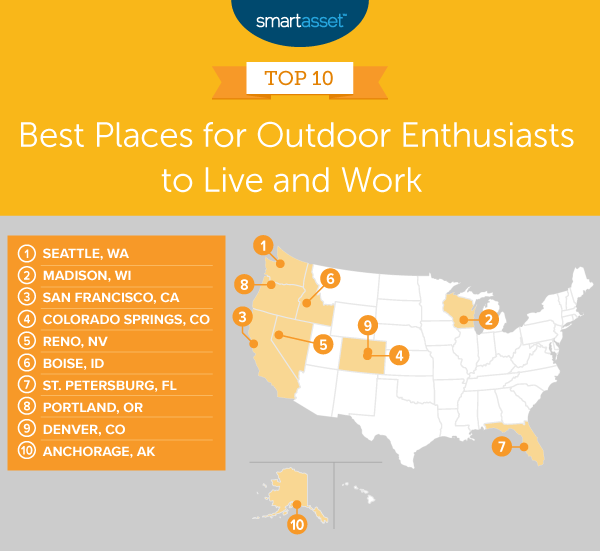 Seattle, Washington is the top city in this study. It places third overall in terms of commuters walking or biking to work, with 14.4% of commuters choosing one of those two options over using a motor vehicle. The median household income in Seattle has gone up 44.40% over the past five years, the sixth-largest increase across all 96 cities we studied. Seattle also places 10th-best out of the total 96 cities in terms of low air pollution.

Madison, the capital of Wisconsin, had an unemployment rate of 5.9% in July 2020, the fifth-lowest in this study. Some 14.0% of Madison commuters walk or bike to work, the fourth-highest of all 96 cities in the study. There are 1.10 nature parks and campgrounds per 100,000 residents in Dane County, 17th-best overall.

San Francisco, California may be a major urban center, but it’s still a fantastic home base for those who love the outdoors. Median income in San Francisco rose 45.60% over the five-year period from 2014 to 2019, the third-largest jump in our study for this metric. San Francisco comes in second for the percentage of commuters who walk or bike to work, at 16.7%. San Francisco also benefits from the fact that 7.49% of California is covered in state or national parks, the third-highest rate for this state-level metric.

Residents of Colorado Springs, Colorado can breathe a healthy sigh of relief: the city ranks third-best of all 96 cities in our study in the air quality metric as a result of its low air pollution. It also is in a state that ranks ninth-best for its outdoor recreation economy. About 3.3% of Colorado’s total revenue comes from outdoor recreation businesses (like fishing and RVing). Colorado Springs had an unemployment rate of 6.9% in July 2020, the 10th-lowest of all 96 cities we analyzed.

Reno Nevada is known as “The Biggest Little City in The World,” and it’s also great for people who love the outdoors. Reno’s median household income grew by 46.91% over the past five years, the biggest jump of all the cities we studied. Reno benefits from the fact that its greater county – Washoe – has 1.48 nature parks and campgrounds per 100,000 residents, the eighth-highest rate for this metric overall. Reno places 18th-best in terms of July 2020 unemployment rate, coming in at 8.1%.

Boise, Idaho is located in a state that ranks 12th-best for its outdoor recreation economy. Roughly 3.2% of the state’s total revenue comes from outdoor recreation businesses. Boise is also very affordable, as housing costs make up just 20.16% of income, eighth-best in the study. Boise’s unemployment rate for July 2020 was 5.0%, the lowest of 96 cities we analyzed.

St. Petersburg places fourth-best for low average daily air pollution. The city saw a 33.84% jump in median household income over the past five years, the 23rd-highest increase we saw out of all 96 cities in the study. St. Petersburg benefits from the fact that Florida ranks within the top half of the study two other state-level metrics. In Florida, 4.3% of the state’s total revenue comes from its outdoor recreation economy and almost 7% of the state is covered by state and national parks.

Like Seattle, Washington in the No. 1 spot, Portland, Oregon is another city in our top 10 where the full splendor of the Pacific Northwest is yours to explore. Portland benefits from the fact that Multnomah County has 2.87 nature parks and campgrounds per 100,000 residents, good for third place overall on this county-level metric. In keeping with the city’s reputation as one of the most bike-friendly cities in the U.S., 11.5% of people there walk or bike to work according to 2019 Census data, the eighth-highest percentage we found. Household income in Portland has gone up 39.56% over the past five years, the 13th-largest increase for this metric in the study. The city also ranks within top 15 of the study for percentage of city that is parkland as well as for the percentage of the state economy that is comprised of outdoor recreation.

Denver sees 7.9% of commuters biking to work, good for 14th-best in this study. It also ranks 14th out of 96 for its relatively low air pollution. The Mile High City ranks 16th overall for its increase in household income, seeing a 37.69% bump over the past five years. Colorado also has an economy where 3.3% of revenue is generated from its outdoor recreation economy, putting Denver in ninth place for this metric (just like Colorado Springs).

Anchorage, Alaska finishes first for the percentage of the city made up of parkland, at 84.17%, as well as for its low air pollution. Anchorage benefits from the fact that it has 6.60 nature parks and campgrounds per 100,000 residents, a first-place ranking on this county-level metric, and from Alaska’s second-place ranking for state and national park coverage, at 9.10%. Additionally, it has a top-20 rate for relatively low housing costs as a percentage of income, at 21.04%.

To find the best cities for outdoor enthusiasts to live and work, we compared 96 of the largest U.S. cities across the following metrics:

First, we ranked each city in each metric. We then found the average ranking, with each metric given an equal weight except for July 2020 unemployment rate, which we double weighted, and the two state-level metrics (national and state park coverage and state outdoor recreation economy), which we half weighted. We ranked the cities based on these averages. The city with the highest average ranking received a score of 100 and the city with the lowest average ranking received a score of 0.

Tips to Avoid Getting Lost in the Financial Wilderness