Most Bike-Friendly Cities in America – 2020 Edition 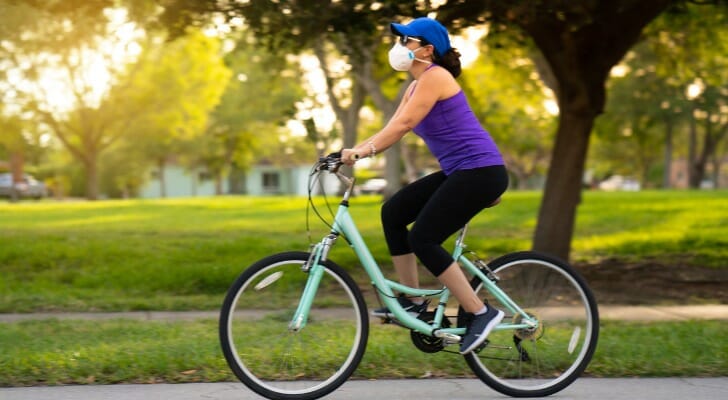 If you’re able to do so, biking can be a great way to get around. Besides the physical benefits, this mode of transportation is great for the environment and generally requires you to have less of your money set aside for commuting costs. Some cities, though, are much better for biking than others in terms of safety, costs and accessibility. That’s why SmartAsset decided to switch gears and find out which cities are best for cyclists.

To find the most bike-friendly cities in the country, we examined data for 100 of the largest U.S. cities across the following five metrics: bike score (ranked on a scale of 0 to 100), percentage of commuters who bike to work, bicyclist fatalities, miles of protected bike lanes and income after housing costs. For details on our data sources and how we put all the information together to create our final rankings, check out the Data and Methodology section below. 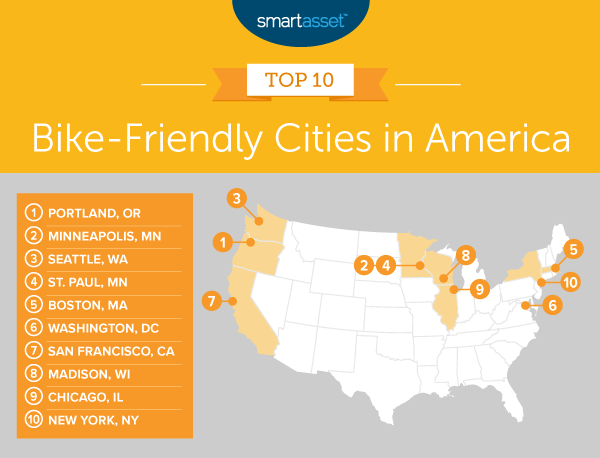 Portland, Oregon has the highest percentage in the study of commuters who bike to work, at 5.3%. The fixie-loving locale also has the second-highest bike score overall, and its Multnomah County has the ninth-fewest bicyclist fatalities per 100,000 residents in over the five-year period from 2014 through 2018, at 0.48.

Though you’ll have to make sure you wear a few layers in the winter, Minneapolis, Minnesota is a great choice for avid bicyclists, taking the No. 2 spot in our study. It ranks first in the bike score metric, at 83.5, according to walkscore.com data. Minneapolis also finishes second-highest in terms of miles of protected bike lanes – with almost 42 – and seventh-highest in terms of percentage of commuters who bike to work – at 3.4%.

Seattle, Washington is one of the most affluent cities on this list, with the seventh-highest median household income after housing costs, at $71,713. Even if a higher median income might allow many of its residents the ability to afford a nicer car, Seattle’s still a great place to use a bicycle to get around, having the seventh-best bike score in the study. The Emerald City also has the fifth-highest percentage of commuters biking to work, at 3.8%.

St. Paul, Minnesota’s Ramsey County  has the seventh-fewest bicyclist fatalities over the five-year period from 2014 through 2018, at 0.36 per 100,000 residents. The city finishes 15th-best in terms of bike score and 10th-best for its relatively high number of miles of protected bike lanes, at 9.40 miles.

Boston, Massachusetts has the sixth-best bike score – 70.5 – of the cities we analyzed. It also has the 12th-highest percentage of commuters biking to work, at 2.3%. There are 5.31 miles of protected bike lanes in the city, the 15th-highest number across all 100 cities we studied.

Washington, D.C. has the third-highest percentage of commuters who bike to work, at 4.3%. It has the ninth-highest miles of protected bike lanes, at almost 12 miles. It ranks 11th-best for both bike score (69.1) and income after housing costs ($64,863).

San Francisco, California ranks in the top six of the study for four of the five metrics (all except the bicyclist fatality metric, which is measured at the county level). The city has the fifth-best bike score in the study, at 72.2, and the sixth-highest number of miles of protected bike lanes, at 16.69. It also has the fourth-highest percentage of commuters who bike to work, at 4.2%, and the second-highest income after housing costs, at $87,728.

Madison, Wisconsin ranks in the top 25 for three study metrics and ranks within the top 40 of the study for the other two. It has the second-highest percentage of commuters who bike to work, at 4.5%. It also has the 21st-best bike score (65.1), and its Dane County has the 24th-lowest bicyclist fatality rate per 100,000 residents over the five-year period from 2014 through 2018 (0.74).

Chicago, Illinois has the third-highest bike score of the 100 cities we analyzed. Chicago also ranks fourth-best in terms of miles of protected bike lanes, with about 27 miles. That’s in part why it comes in 15th place for its relatively high percentage of commuters who bike to work. On the negative side, though, the city’s Cook County has a relatively high biker fatality rate compared to other cities in our top 10.

The Big Apple rounds out our list of the top biking cities in America. New York City has the highest number of miles of protected bike lanes in the study, at more than 124 miles. It has the ninth-best bike score (70.0) and ranks 22nd out of all 100 cities in the study for its relatively high percentage of commuters who bike to work, at 1.3%. 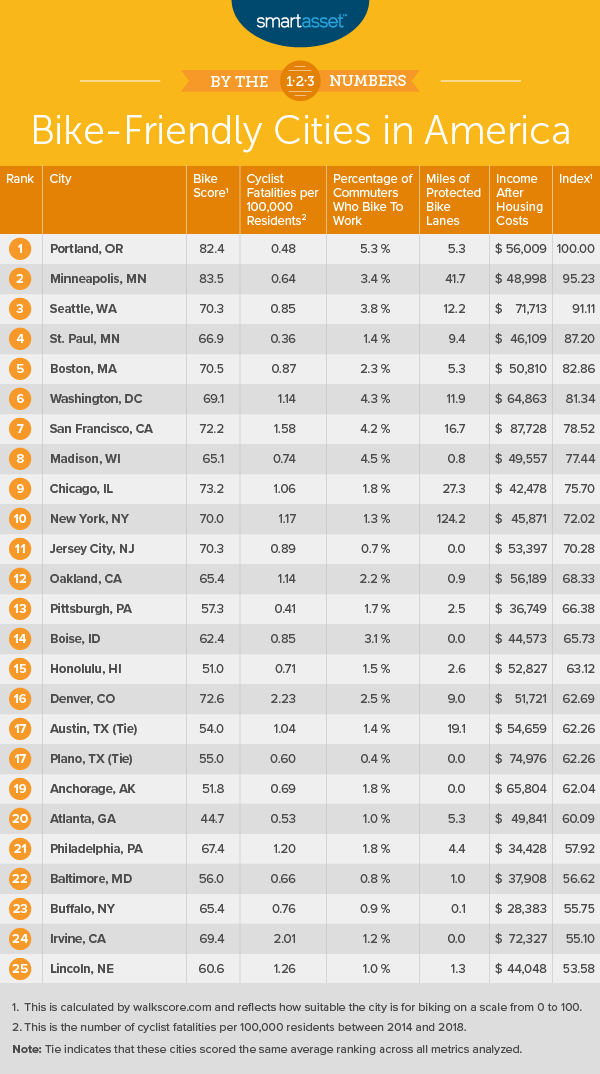 SmartAsset analyzed 100 of the largest U.S. cities across the following five metrics to find the best biking cities in America:

Tips for Steering Your Money in the Right Direction