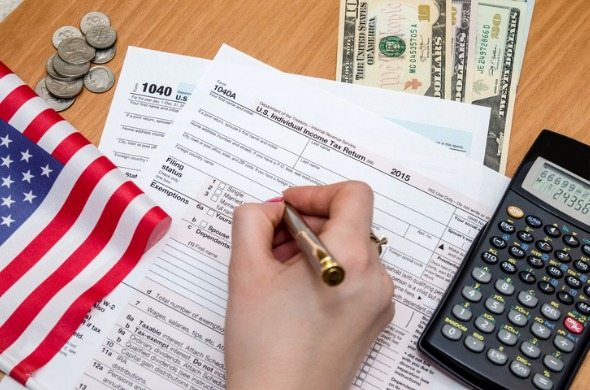 For most people, the only fun part of doing your taxes is getting your tax refund. Not everyone receives a refund. Technically speaking, tax refund is money you overpaid in taxes, meaning it was always your money and the government was just “borrowing” it for a while. Regardless, it always feels good to get a large check. Below we look at this topic at a state level, to determine which states have the largest average income tax refund. 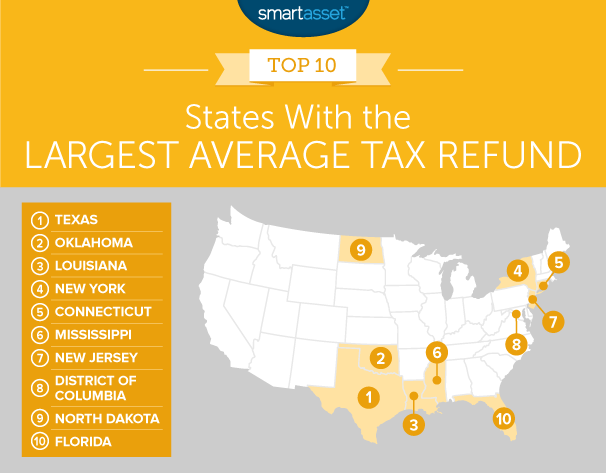 Oklahoma takes second. The average income tax refund here is $3,088, about $50 shy of Texas. However, thanks to a lower average costs of living, that refund should go a bit further in Oklahoma. We estimate that the average tax refund in Oklahoma could cover over four months’ worth of housing costs.

In total the IRS refunded $4.08 billion to Oklahoma taxpayers.

Unfortunately for the average New York state residents, and especially those in the Big Apple, $2,900 doesn’t buy too much reprieve from the housing cost burden.

The average income tax refund in Connecticut was $2,958.

Despite only having the sixth-largest average income tax refund, it could be argued Mississippi residents get the most from their refund in this top 10. According to Census Bureau data, the median home costs $677 per month, that means the average tax refund of $2,953 is worth 4.36 months’ worth of housing costs. That’s the most in our top 10.

Although, if you have your housing costs comfortably covered, it is probably a good idea to put your tax refund toward your retirement.

The average New Jersey taxpayer gets a refund almost identical to the one Mississippi residents receive. The problem for New Jersey residents is that it doesn’t go as far. Thanks to high housing costs in the Garden State, the average tax refund of $2,943 will cover less than two months’ worth of housing costs.

New Jersey also has a progressive state income tax. Joint filers will pay an income tax rate of 8.97% on income above $500,000.

The nation’s capital has the eighth-highest average income tax refund. The average taxpayer here can expect to get back around $2,900 from the federal government. That is equivalent to about 1.8 months’ worth of D.C. housing on average.

The average North Dakota income taxpayer got a refund of $2,896 in 2016. That is just $8 shy of Washington D.C.’s figure. This state does have a progressive income tax, but it is one of the lowest in the nation, something residents probably appreciate when paying taxes. North Dakota’s marginal income tax rate tops out at 2.9%.

There were about 7.8 million tax filers who received a refund in Florida in 2016. They received a total of $22.4 billion, for an average income tax refund of $2,877. If you used $2,877 to pay for the average housing in Florida it would equal 2.8 months’ worth of housing payments.

Residents in Florida will already know it’s a great state to retire to, so why not put that tax refund into a retirement account, like an IRA?

In order to find the states with the largest average tax refund, we looked at data for all 50 states and Washington, D.C. Specifically, we looked at the following two metrics:

Tips for Spending Your Tax Refund

Many Americans have trouble saving money. One way to boost your savings rate is to treat your tax refund as money you had already been saving. But that doesn’t mean you should just stick it in a savings account.

If you have long-term credit card debt, it should be your first priority when you get your tax refund. With interest rates which can exceed 20%, credit cards are usually the most expensive debt you can have. By paying it off now you will pay less interest overall. Student debt can also be fairly expensive. Using your tax refund to pay off student loans may also make sense.

After those two options, assuming you already have an emergency fund, the smartest financial move would be to invest your tax refund, with an eye for retirement. Let’s say you received a tax refund of $3,000 and invested it. Assuming an average return of 6% per year, your initial $3,000 would be worth $17,230 after 30 years. That is an extra $15,000 you earned without doing much of anything. We can also take this a step further. Let’s assume you add each year’s tax refund to your investment. Making the same assumptions (6% returns over 30 years) your investment would be worth $245,400. Not too shabby!