The Best Cities for Motorcycle Owners 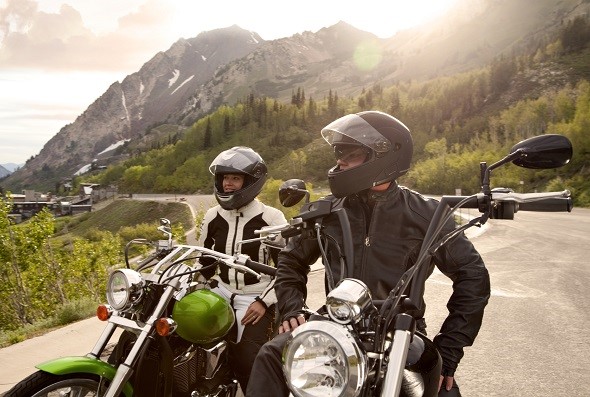 According to the U.S. Department of Transportation, as of 2012 there were at least 8.4 million registered motorcycles in the United States (a number that has likely risen in the past four years as the economy has strengthened and auto sales have ballooned). That’s a lot of hogs – about one for every 37 people in the U.S.

Need a boost to get that bike? Find out what loan options are available to you.

In some states, the concentration is even greater. South Dakota, for example, has one registered motorcycle for every 11 residents.

There are numerous factors that might make some places better for motorcyclists than others. Weather is an obvious one. Going for a ride is a lot more pleasant if it isn’t pouring rain.

Likewise, frigid temperatures can push even the most die-hard motorcycle owner to consider an alternate means of transportation. For many motorcyclists, access to the open road is also important. A few hours of traffic can suck the fun right out of an afternoon joyride.

So what are the best cities for motorcycle owners? To answer that question, SmartAsset analyzed data on every U.S. city with a population of at least 150,000. Along with the weather and traffic congestion in these cities, we also looked at such metrics as the state max speed limit on highways and the number of registered motorcycles per capita. (Read our full methodology below.) 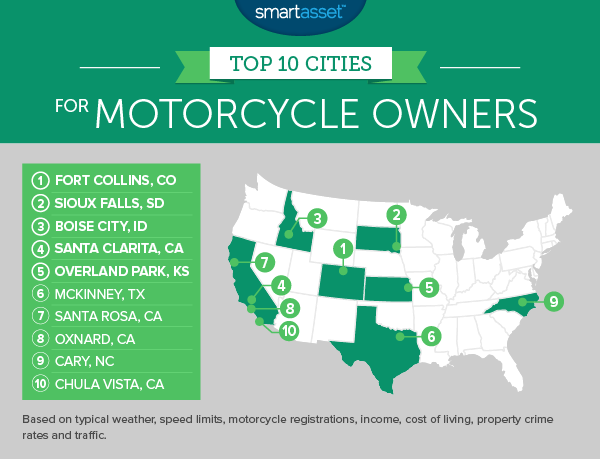 Why is Fort Collins the best city in the U.S. for motorcycle owners?

First, take a look at the location. Along the Front Range of the Rocky Mountains and 40 miles south of the Wyoming border, Fort Collins is surrounded by breathtaking scenery and opportunities for great rides. For instance, a loop through the Roosevelt National Forest, up to Laramie, Wyoming, and back down to Fort Collins would cover 220 miles of mountains and valleys in about four and a half hours.

Next, check out the traffic (or lack thereof). Motorists in Fort Collins spend an average of less than 20 hours per year sitting in traffic, making it one of the 20 least-congested cities in SmartAsset’s analysis. Colorado also has some of the lowest gas taxes in the country, with a state tax of just 22 cents per gallon.

South Dakota, which is one of the top states for an early retirement, may also be the best state for motorcyclists. Drive along I-90 on any summer day and you are sure to see numerous packs of motorcycles zipping along. The state is home to what may be the world’s largest annual gathering of motorcycle owners, the Sturgis Motorcycle Rally, which in 2015 drew an astonishing 739,000 people.

While that rally is located across the state from Sioux Falls, there are plenty of reasons motorcycle owners will be happy in South Dakota’s largest city. (Sturgis and nearby Rapid City were not included in SmartAsset’s study as their population is less than 150,000.)

The average motorist in Sioux Falls spends just 15 hours per year in traffic, ninth-lowest among the cities we analyzed. Likewise, given the city’s strong economy and low housing costs, motorcycle owners should have some spare income to spend on the upkeep and improvement of their motorcycle collection.

Overland Park is the second largest city in the state of Kansas. Of the 171 cities in SmartAsset’s analysis, it has the 14th highest income after housing costs (like mortgage payments and insurance). That means motorcyclists should have spare money to spend on motorcycle repairs and improvements.

Overland Park also has the 16th lowest property crime rate of the cities in SmartAsset’s analysis. There were just 279 auto thefts in the city in 2014, 1.5 for every 1,000 residents.

McKinney is about 30 miles north of Dallas, but when it comes to traffic it is a world apart. In fact, the average motorist in McKinney spends just nine hours a year in traffic congestion, according to the Texas A&M Transportation Institute. That is lowest of any city in our study. For motorcyclists, it means less time waiting for the car ahead to move and more time on the open road.

Thinking about borrowing money? Here are a few things you should and shouldn’t do.

Located in the heart of one of America’s top wine regions, Santa Rosa is surrounded by beautiful scenery. Motorcyclists have numerous options, whether they want to go for a quick afternoon joyride or take a longer weekend tour. Potential destinations include the Pacific Coast Highway, which is less than an hour away, and Redwood National Forest, which is about four hours away.

If you love the beach and love your motorcycle, Oxnard may be the place for you. It is located along the Pacific Coast, west of Los Angeles. The city’s weather is stunning. Average maximum temperatures never fall below 60 or exceed 80. In fact, on average the city has just one day a year in which the temperature gets over 90 degrees.

This North Carolina city is the number one city on the East Coast for motorcycle owners. Like the rest of the East Coast, it is wetter than most cities in the west, averaging 76 days per year in which it receives at least 0.1 inches of rain. On the other hand, the climate in Cary is fairly temperate. Maximum temperatures fall below 40 degrees an average of 15 days a year, and rise above 90 degrees an average of 33 days per year.

The area is not lacking for beautiful routes. For instance, the Blue Ridge Parkway, “America’s favorite drive,” is located about three and a half hours from Cary. The North Carolina coast is less than three hours away.

Take a ride through the Sonoran Desert or down the Coast of Baja California. Check out Cleveland National Forest or Joshua Tree National Park. All of these destinations are just a few hours from Chula Vista. The city also has some of the best motorcycling weather of any city in the U.S. It ranked in the top 15 cities in our study for both its limited rainfall and lack of extreme temperatures. 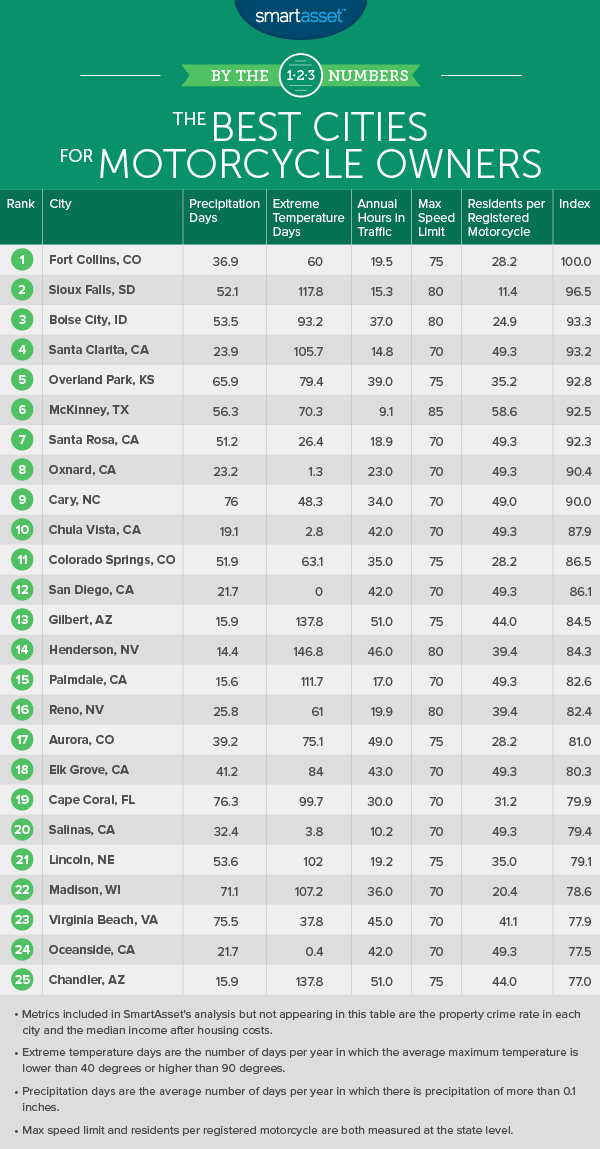 To reach these results, SmartAsset analyzed data on 171 U.S. cities with a population of more than 150,000. Specifically, we looked at the following seven metrics:

We ranked each of the 171 cities in our analysis according to those seven metrics. (For state-level metrics, cities in the same state received the same ranking.) We then averaged those rankings, giving half-weight to the two measures of weather and full weight to all other metrics.