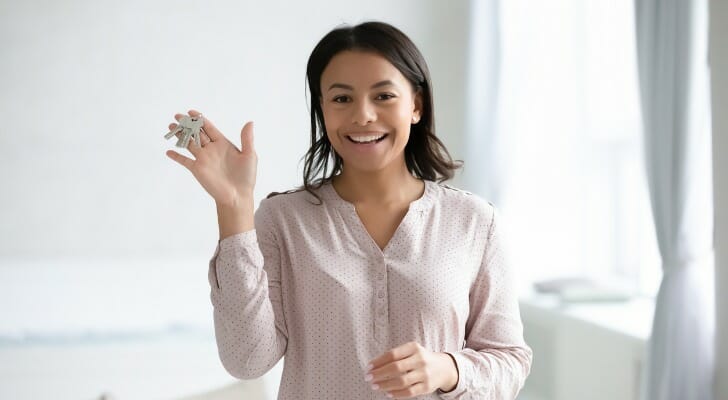 Affordability issues generally affect renters more than homeowners. More than 40% of renters pay more than a third of their household income on rent compared to just 24% of homeowners on their mortgage, according to a February 2020 survey by Freddie Mac. But depending on where they live, renters can lower the burden of their housing costs. That’s why SmartAsset crunched the numbers to identify cities in the U.S. where rent has decreased the most relative to income.

Specifically, we compared rent prices from 2016 and 2019 to median household incomes over the same period. We additionally examined how rent prices have changed during 2020, amid the COVID-19 crisis. For details on our data sources and how we put all the information together to create our final rankings, check out the Data and Methodology section below.

This is SmartAsset’s second annual study on changes in rent affordability. Check out the 2019 version here.

Households in Boston, Massachusetts are allocating smaller portions of their paychecks to rent. Though average market rent did not fall over the course of the past three years, incomes rose significantly, causing the average percentage of household income spent on rent to decrease. In 2016, the average fair market rent was $2,949, and median household income was $63,621. In 2019, rent was $3,140, and median income was $79,018. In percentage terms, rent rose by just under 7%, while incomes rose by more than 24% on average.

In Los Angeles, California, the average market rent increased by about $200 between 2016 and 2019, while the median household income increased by almost $13,000. With those changes, households are spending about 7% less of their income on rent.

Notably, despite increasing rent affordability, Los Angeles residents are still spending a lot on rent. In 2019, rent as a percentage of income was 49.75%, the second-highest in our study, behind only that of New York City.

The nation’s capital ties with Los Angeles for the No. 3 city where rent has become more affordable. Using Rent Jungle and Census Bureau data, we found that the average household spent about 37% of its gross income on rent in 2016, relative to only 30% in 2019. This large change was caused by primarily by increasing incomes in the city. Between 2016 and 2019, the median household income of residents rose by more than 22%, from roughly $75,500 to almost $92,300. 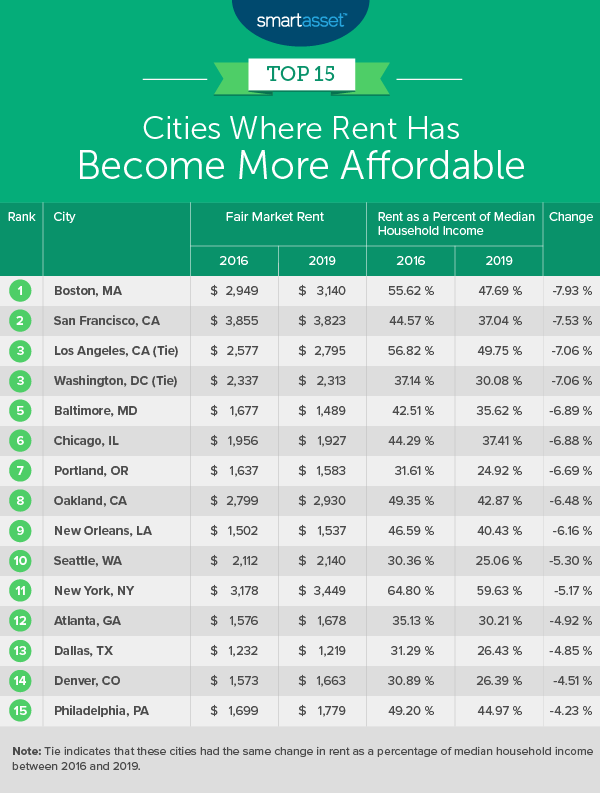 We looked at rent affordability through 2019 in the above section because 2020 median household income figures are not yet available. However, we can still see changes in the rental market and subsequent prices for 2020, through the third quarter of the year. Generally, housing markets for renters have been more deeply affected than markets for homeowners during the pandemic. While some families have left big cities to buy more spacious homes in the suburbs, Zillow’s 2020 Urban-Suburban Market Report research shows that suburban housing markets have not strengthened at rates disproportionate to urban ones. The same is not true, however, for rental markets. Zillow found that though rental prices have generally dropped in both urban and suburban areas during the COVID-19 pandemic, the decline has been larger in urban ZIP codes.

This decline has been particularly significant in some of the largest and most populated urban areas. Rent Jungle data shows that average rent prices fell by more than 5% from January to September 2020 in six cities – San Francisco, California; Detroit, Michigan; Boston, Massachusetts; San Jose, California; New York, New York and Austin, Texas – all of which have populations exceeding 670,000. Of those, San Francisco leads for its drop in average fair market rent. Rent Jungle data shows that the average fair market rent in the city fell by almost 17%, from almost $3,800 in January 2020 to about $3,100 in September 2020. Following San Francisco, the biggest gross change in rent occurred in Boston. In January 2020, Rent Jungle reported an average fair market rent of almost $3,200 relative to less than $2,900 in September 2020.

To complete our analyses for both sections of this report, we looked at data for 50 of the largest U.S. cities. Specifically, we compared:

When looking at the rent market in 2020, we compared Rent Jungle data on the average market rent in January 2020 to the average in September 2020. We found the percentage change over that eight-month time period for all 50 of the cities we looked at.