Where Millennials Are Moving – 2021 Edition 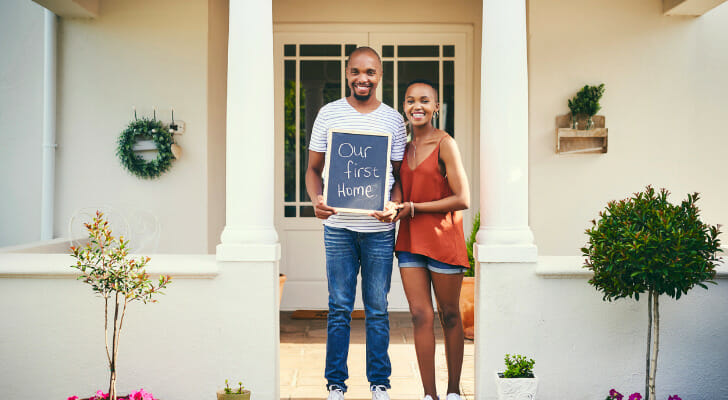 Young professionals have long looked to New York, Los Angeles, Chicago and other bustling cities as places of opportunity. But in the last few years, migration patterns have shifted to show that a smaller share of Americans are moving to these cities. And after the outbreak of the COVID-19 pandemic, another study also reveals that the majority of young professionals are living with their parents. Even so, millennials have been the largest generation in the workforce since 2016, and as they move throughout the country in search of new job opportunities, SmartAsset crunched the numbers to find the cities and states where their net migration is the highest.

To do this, we looked at Census Bureau data for all 50 states and the District of Columbia, as well as 180 cities. For details on our data sources and how we put all the information together to create our final rankings, check out the Data and Methodology section below.

This is SmartAsset’s fifth annual study on where millennials are moving. Read last year’s version here.

States Where Millennials Are Moving 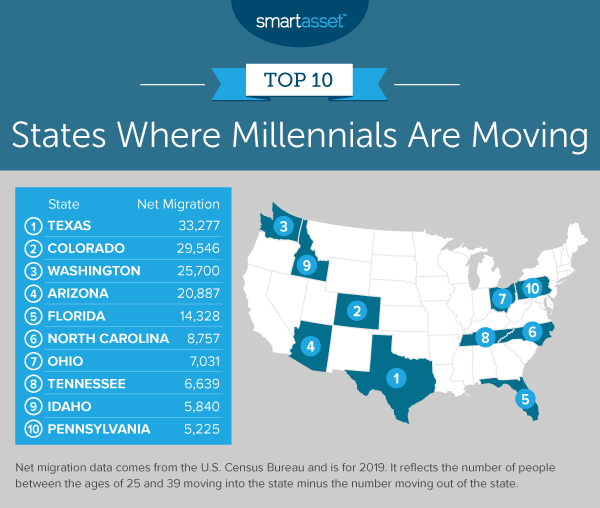 More than 187,000 people between the ages of 25 and 39 moved to Texas in 2019, while nearly 154,000 left, creating a net gain in millennial residents of more than 33,000 – the biggest net gain for this generational group in the country. As a result, Texas leads the study for a second consecutive year.

Another state near the top of the list is Colorado, which saw net inflows of more than 29,500. Colorado also had the biggest percentage increase in the number of millennials, at 2.21%, and though the proportion of millennials is higher in the District of Columbia, Colorado is the state where millennials make up the biggest portion of the population, at 23.26%.

To complete the Western contingent up top, Washington and Arizona join Colorado to round out the top four.

Cities Where Millennials Are Moving 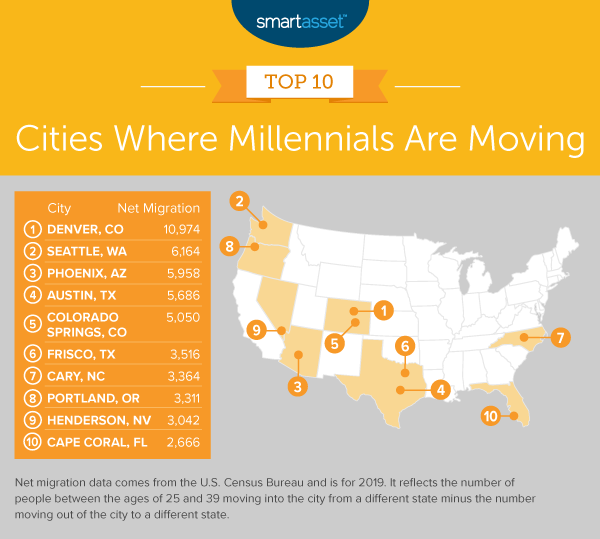 Denver, Colorado claims first place in our study with the biggest net migration of millennial residents, as 10,974 millennials moved to the city from a different state in 2019. Additionally, this generational group makes up 32.92% of the city’s population, which is the fifth-highest percentage overall.

The millennial population in Seattle, Washington grew by 2.42% in 2019, with a net migration of 6,164 from out of state. This generational group happens to make up 33.86% of the city’s population, the highest in our top 10.

Austin, Texas millennials make up 31.30% of its population, which is the 11th-highest population percentage for this generational group in our study. The city had a net migration of 5,686 millennials from out of state in 2019.

Cary, North Carolina has the smallest population in our top 10, with 171,143 residents. The city had a net migration of 3,364 millennials from out of state in 2019, which is a 9.41% jump – the biggest percentage increase in our study. 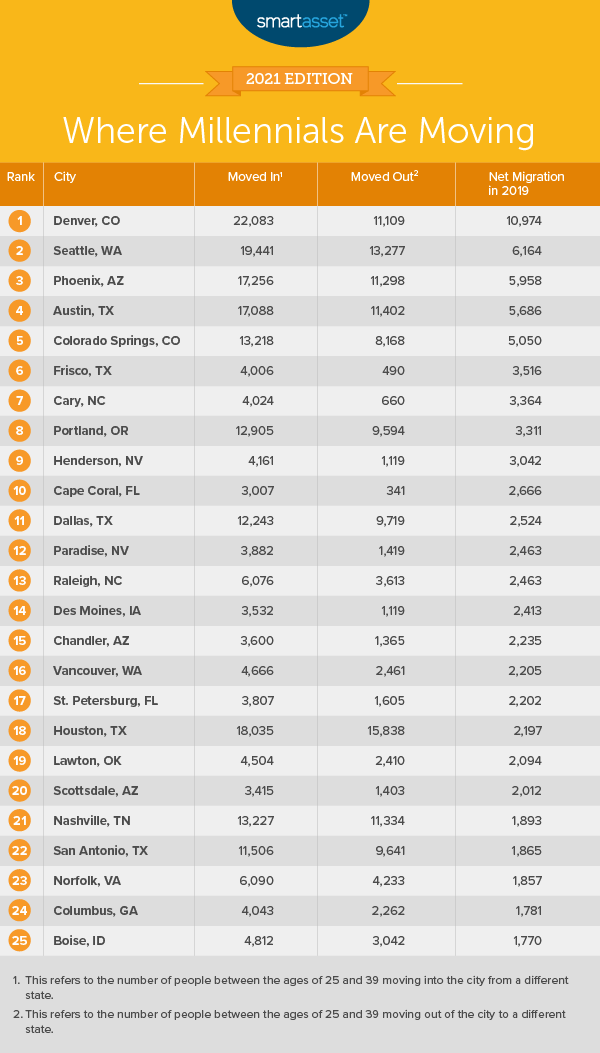 To find both the states and cities where millennials are moving, SmartAsset analyzed data from the Census Bureau’s 2019 1-year American Community Survey.

In determining the cities where millennials are moving, we considered 180 of the largest cities in the U.S. for which data was available. We found net migration during 2019 in each city by subtracting the number of people between the ages of 25 and 39 who moved out of the city to a different state from the number of people in the same age group who moved into the city from a different state. Cities with the highest net migration ranked the highest, and vice versa.