The Best Places to Raise a Family in Florida 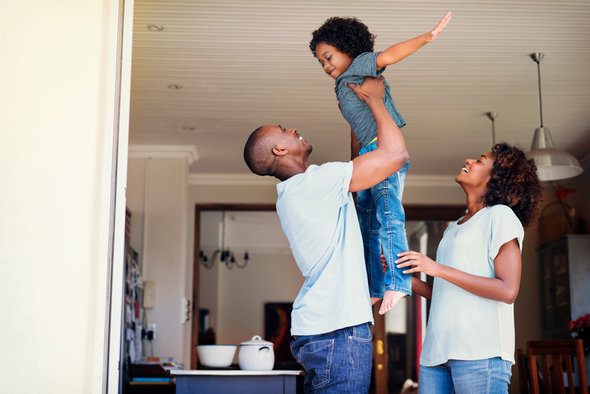 Florida is a wonderful place to raise a family. The weather is almost always great and the cost of living is also relatively low, meaning parents won’t have to break the bank to live there. Plus, Florida has no state income tax. That means keeping more of every paycheck you earn. But what are the best places in Florida to raise a family? Read on as we rank the top 10 cities.

Looking to move your family? Check out the current mortgage rates in Florida.

In order to find the best places to raise a family in Florida, we looked at data on 65 cities across the state. We looked at metrics like family poverty rate, crime rate, child care costs, home value change, graduation rate, average deficit for families in poverty, median household income and median housing costs. Check out our data and methodology section below to see where we got our data and how we put it together. 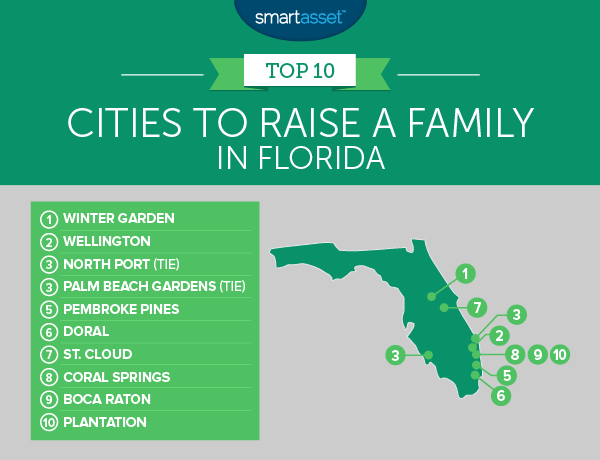 Winter Garden, a suburb 14 miles west of Orlando, is the best place in Florida to raise a family. This is a city full of young people. Over 28% of the population is under the age of 20, meaning making new friends shouldn’t be too much of a problem for children here. Winter Garden also has a strong local economy. The city has a low unemployment rate of 5.9% and only 7.3% of families fall under the poverty line. For both of those metrics Winter Garden ranks in the top 10.

In fact, Winter Garden ranked pretty well in most metrics. The main concern for families here and families looking to move here, is the relatively high housing costs. Our data on housing costs shows that on average, Winter Garden residents pay about $1,215 per month. That is one of the higher figures in our top 10.

For those looking to move to Florida, SmartAsset has outlined the top banks in the state that you can feel comfortable handling your assets, loans and more through.

Wellington is a village just west of West Palm Beach and is, in fact, the most populous village in the state. This city was propelled up our rankings by high scores in economic metrics. For example, Wellington has the highest median household income in our study. The average household earns over $81,000 per year. Parents will also be happy to hear that Wellington has a solid high school graduate rate. It’s tied for second in the top 10 with a rate of 79.4%.

Something to keep in mind for people looking to bring their families to Wellington are the high housing costs. According to the data we gathered, households here can expect to pay over $1,700 per month on housing, making it the least affordable city in our list.

North Port is also relatively affordable for families. Our data reveals that North Port has the 16th-lowest median monthly housing costs of any city we analyzed. Education is another area where North Port shines. Our research shows that the area has a high school graduation rate of 79%, a figure which is higher than the state average.

Parents may be concerned about the high child care costs, however. Our data shows the market rate cost of keeping a toddler in a private center is $163 per week. That would mean paying just over $8,500 per year for a single child in care.

Palm Beach Gardens is located north of West Palm Beach. The main reason to raise a family here is the economic benefits. This city has a low poverty rate. Only 4.2% of families are living under the poverty line. Plus, Palm Beach Gardens has the second-lowest unemployment rate in the study.

The city also has a top 10 high school graduation rate, showing that the majority of students in Palm Beach Gardens get a decent education.

Raising a family in Pembroke Pines will probably be pricey. According to our data, Pembroke Pines ranks in the top half most expensive for both median housing costs and weekly child care costs.

But there are reasons that parents are willing to pay a lot to live there. For one thing Pembroke Pines is one of the safest cities in the study. The city ranks in the top 15 in both of our crime metrics. For another, the unemployment rate is low, meaning finding work in the area hopefully won’t be too difficult.

Doral is another great place in Florida to raise a family if you can afford it. This city has the highest median monthly housing costs in the study. However that is partly offset by the earning potential of households in the area. Our research shows that the average household in Doral earns just under $73,000 per year. That’s the second-highest median salary in the Florida.

Doral is also a city full of young families. Over 31% of the population is under the age of 20.

St. Cloud is a city 26 miles southeast of Orlando. This city has some of the best schools around. The high school graduation rate is above 80% – that’s the highest score in our top 10. Plus, St. Cloud is affordable when it comes to day care costs. Our data shows the weekly cost of keeping a toddler in a day care center amounts to only $143 per week, a top 20 rate.

Coral Springs, or the City of Coral Springs as it is officially known, takes our eighth spot for best places to raise a family in Florida. This is a fairly young city, chartered only in 1963, and has a fairly young population to match. Just under 29% of the population is under the age of 20. The City in the Country is also relatively crime-free. According to our research, Coral Springs has top 10 scores in both its property crime rate and violent crime rate.

Homeowners will also be pleased to learn that Boca Raton saw the third-highest increase in median home values from 2011 to 2015.

At around $1,400 per month in average housing costs, Plantation is one of the least affordable places in our study. But families in the area get quite a bit of bang for their buck. The schools in Plantation are good (the graduation rate is over 76%), few families are under the poverty line (7.7%) and the city has a low unemployment rate (6.6%). All factors which make for one of the best places to raise a family.

Living in Plantation also means worrying less about crime. According to our research, Plantation has a crime rate of about 4,000 crimes per 100,000 residents. Taking violent crime and property crime separately, we see that Plantation scores in the top 15 for both. 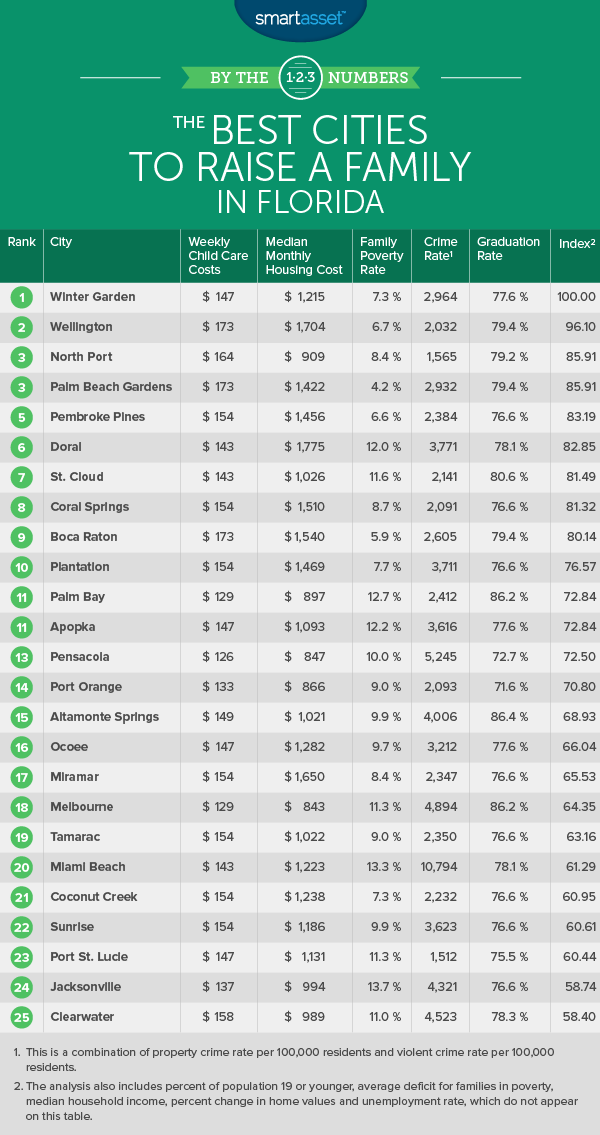 In order to find the best places to raise a family in Florida, SmartAsset analyzed data on 65 cities. Specifically we looked at data on the following 11 factors:

Tips for Finding the Right Mortgage

Once you’ve figured out how much home you can afford, it’s a good idea to also shop around for the right mortgage.

In general, you want to look for the mortgage with the lowest interest rate. Even minor differences in interest rates can mean tens of thousands of dollars over the life of the loan. Typically, lenders will only give the best mortgage rates to people with the best credit scores. This means if your credit score isn’t up to snuff, you may want to spend some time cleaning up your credit report so you can qualify for a better mortgage rate.