The Best Places for Working Women

According to most research, a pay gap exists between men and women in the U.S. The numbers vary but for the working population over age 15 nationwide that gap is around 28%, according to data from the U.S. Census Bureau. This means women make 72 cents on average for every dollar men do. And pay is not the only important metric to consider when it comes to workplace equality.

In order to come up with our list of the best places for working women, SmartAsset looked at factors like the pay gap, the percentage of women in the labor force, the ratio of working women to working men, women’s unemployment rate and women’s income after housing. Read the full Data and Methodology section below to get a better idea of how we analyzed these numbers to create our ranking. 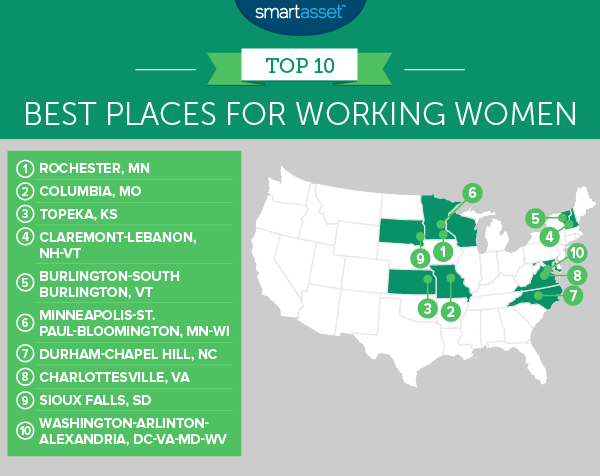 Rochester, Minnesota tops our list of the best places for working women because after deducting housing costs, women there are left with higher median incomes than in any other metro area. According to our data, women in the Rochester area are left with $23,697 on average after paying for housing. The pay gap is relatively low at 82.4%. Rochester also has a high percentage of women in the labor force. According to Census Bureau data, 68.2% of women in Rochester are in the labor force and only 3.5% of them are currently unemployed.

In Columbia, MO, women make up the majority of the working population – 52% of all employed persons there are women. This ranks fourth in the nation for that metric. One explanation for why Columbia is a good place for working women may be the presence of health care and education jobs. Nationwide 74% of health care workers are women, as are 73% of education workers. And the two industries are the sixth and seventh largest in Columbia, respectively, according to Census Bureau data.

Related Article: The Best Places for Children in 2016

Topeka, Kansas ranks third in our study of best places for working women. As the state’s capital, it has a large number of government jobs. More than 54% of public administration workers in Topeka are women. The 62% of women in Topeka who are in the labor force take home $20,374 on average after housing costs. Women in Topeka are paid 81% of what men are paid.

This area along the Connecticut River valley is dominated by the health care and education industries. Our data shows that almost 20% of jobs in the area are in those two industries. And as we mentioned previously, women make up more than 70% of workers in those industries nationwide. Women in Claremont-Lebanon earn $19,448 on average after housing costs.

Like a few of the cities ranked highly, Burlington has a large education industry. The University of Vermont and Champlain College bring both education and administrative jobs to the area. Vermont’s largest hospital is also located in Burlington, which means health care jobs. Burlington has one of the highest rates of women in the labor force in the country (67%), as well as one of the lowest unemployment rates for women (5.25%).

In the Minneapolis-St. Paul-Bloomington area, 68.4% of women participate in the labor force. It ranks seventh in the nation in that metric. Women are also well-compensated for their work. The annual median income for women in this area is $35,165 and after taking out housing costs, almost $21,000, on average, is left. Unfortunately, men are still better paid. The pay gap in this area is 74%.

Charlottesville would rank higher if the rate of labor force participation among women were higher. Only 57% of women in Charlottesville are in the labor force which ranks 237th in our study. Still, women there earn $19,950 on average after housing costs and the pay gap is 81.4%.

Working women in Sioux Falls occupy 68% of what the Census calls “management occupations.” In comparison, nationwide only 40% of management roles are filled by women. Women in Sioux Falls also have the second-highest labor force participation rate in the country (71%) and the fifth-lowest unemployment rate for women (3.46%). However the pay gap here is relatively large, with women making just 75% of what men make.

The area around the nation’s capital rounds out our ranking of the best places for working women. It offers women plenty of high-income opportunities, including desirable STEM jobs. Of course, the living costs in this area are among the highest in the country. Despite this, women earn $21,674 on average after housing costs. The pay gap could be tightened in the Washington-Arlington-Alexandria area. According to our data, on average women make 75% of what men make. 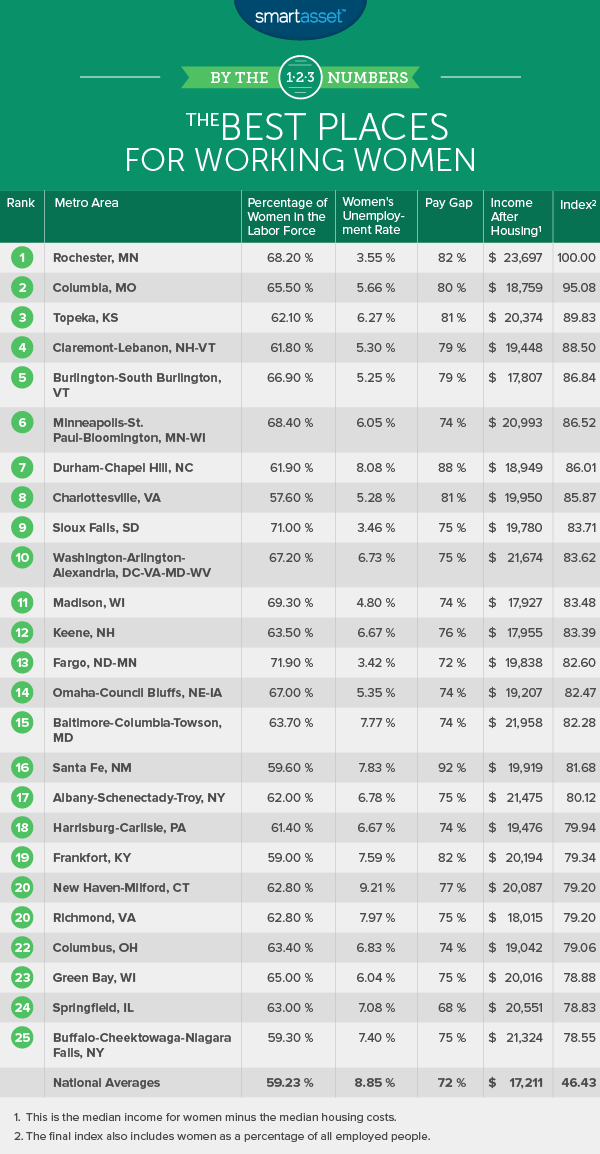 In order to rank the best places for working women, we looked at 507 metropolitan areas across the following five metrics:

Data for all five metrics is from the U.S. Census Bureau’s 2015 American Community Survey 1-Year Estimates.