The Best Cities for Teens 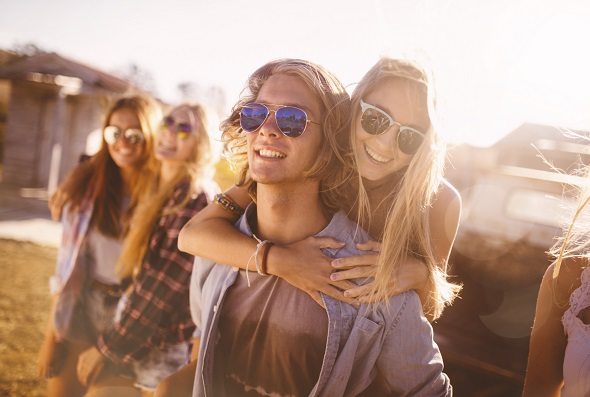 There are currently about 29.5 million teenagers in the U.S., according to the Census Bureau. That’s a lot of teenagers! In comparison, there are about 28.5 million U.S. residents over the age of 70.

What do those teens do? Roughly one out of six of them work – about 4.6 million, according to the Bureau of Labor Statistics. Many more would like to work, but can’t find a job. (The teen unemployment rate is 16%.) Most are enrolled in school – middle school, high school or (for some) college.

Getting your own place? Find out if it’s better to rent or buy.

Some drive, but most don’t. According to researchers at the University of Michigan, just 24.5% of 16-year-olds had a driver’s license in 2014, a huge decrease over past decades. That means they depend on their parents to get around, unless they live in a city with good public transit or walkable streets.

SmartAsset gathered data on the 100 largest U.S. cities to determine which places are best for teens. The most important consideration in our analysis was fun: how much fun stuff is there to do in this city anyhow?

We looked at the number of basketball hoops, baseball diamonds, skate parks, beaches, disc golf courses, bowling alleys, theaters and arcades per 100,000 residents. We also looked at how many teens there are in each city (as a percentage of the total population) and how easy it is to get around each city on foot (the Walk Score).

We also considered metrics relating to the work environment for teens: the teen unemployment rate and the minimum wage. Lastly, we considered the average high school graduation rate at schools in each city.

Find out now: Where are the safest cities in the U.S.?

We ranked each city according to those eight metrics. We separated the “fun stuff” into three categories for these rankings: basketball hoops and baseball diamonds; skate parks, disc golf courses and beaches; bowling alleys, movie theaters and arcades.

We then averaged those rankings, giving half weight to the three metrics of “fun stuff” and full weight to all other metrics. Overall scores were based on those average rankings. The city with the best average ranking scored a 100. 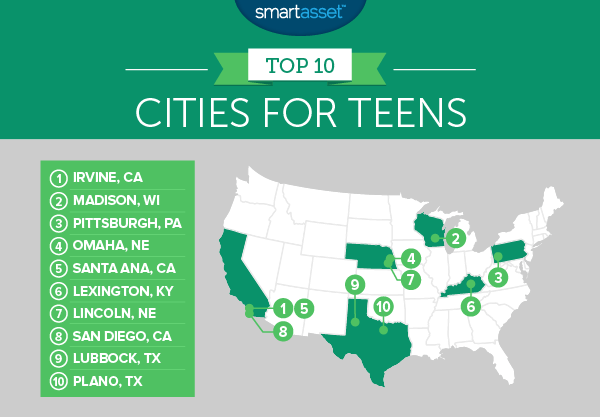 Located in central Orange County, Irvine rates extremely well for the quality of its schools and for the employment market for teens who want to work. The average graduation rate at Irvine high schools is 96%, highest among the 100 cities in our analysis. Meanwhile the teen unemployment rate is just 9.6%. That is well below the national average and ranks as the fifth-lowest rate in our study.

There probably aren’t many bored teens in Madison. The Wisconsin capital ranks first among major U.S. cities for its concentration of skate parks, disc golf courses and public beaches, with 6 of those (combined) for every 100,000 residents.

It ranks fourth for its concentration of bowling alleys, arcades and theaters, with about 5.5 for every 100,000 residents. It also ranks first for its teen unemployment rate. Just 5.8% of teens who want a job in Madison can’t find one.

Like Madison, Pittsburgh is a fun place to be a teen. It ranks ninth for its concentration of baseball diamonds and basketball hoops. It also ranks ninth for movie theaters, bowling alleys and arcades, with about 4.8 for every 100,000 residents.

While teens in many cities may be stranded if their parents aren’t around to give them a ride, in Pittsburgh that may not be as much of a problem. The city’s Walk Score of 60 makes it the 22nd most walkable major U.S. city. It also has a fairly good public transit system.

Located along the Iowa boarder in eastern Nebraska, Omaha ranks as the fourth-best city for teens. It rates in the top half of major U.S. cities on all eight of the metrics SmartAsset analyzed, the only city to do so. It ranked tenth overall for the concentration of fun stuff, with 4.7 movie theaters, bowling alleys and arcades for every 100,000 residents.

California has the highest state minimum wage in the country at $10.00 (some cities, including Washington, D.C., have higher wages). That is important for teenagers who are working full- or part-time. Many teens are paid the minimum wage, or close to it.

This Kentucky city is known as a college basketball mecca, thanks to the University of Kentucky’s historic domination of the sport. It’s also a great place for up-and-coming hoopers to ply their trade. According to the Trust for Public Land, there are 72 public outdoor basketball hoops in Lexington, 23 for every 100,000 residents.

Lexington is a college basketball mecca and Lincoln is a college football mecca. Along with attending Huskers games, there are plenty of fun ways for teenagers in the Nebraska capital to kill time between Snapchats. The city ranks sixth for its concentration of bowling alleys, arcades and movie theaters, with 5.2 for every 100,000 residents. Lincoln is also a great city for children in general.

What better way for a teenager to pass an afternoon than a trip to the beach with friends? Well, San Diego has beaches, 26 public beaches to be exact. That is more than any city aside from Chicago, which has 32. Seeing as how Chicago’s beaches are plated with ice for roughly half the year, however, we’ll give this one to San Diego. Surfs up!

Lubbock ranks third in our study for its concentration of teenagers. According to the U.S. Census Bureau, some 8.3% of the population in Lubbock is 15-19 years old. That means teens in Lubbock will have lots of peers to befriend and share Vines with. (A Vine is a type of social media video that is popular with teens.)

One of the things that teens must do is go to high school. Many teens do not like this activity but some do. Regardless, most teens would prefer that their time in high school does not go to waste. Ideally that would mean graduating after four years.

In this regard, Plano is a very good place to be a teen. It ranks second in SmartAsset’s study for its average graduation rate. About 94% of high school students in Plano graduate in four years. 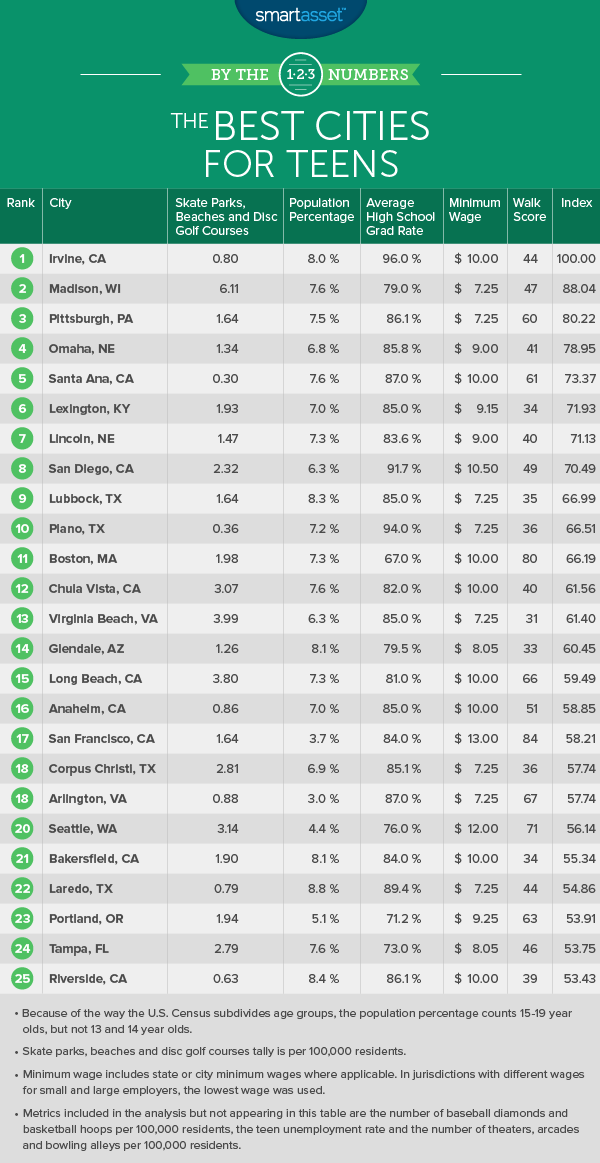 The data that SmartAsset used in our analysis comes from the following publicly available sources. Data on the number of basketball hoops, baseball diamonds, skate parks, beaches and disc golf courses in each city comes from Center for City Park Excellence at The Trust for Public Land.