The Most Affordable Cities for Renters 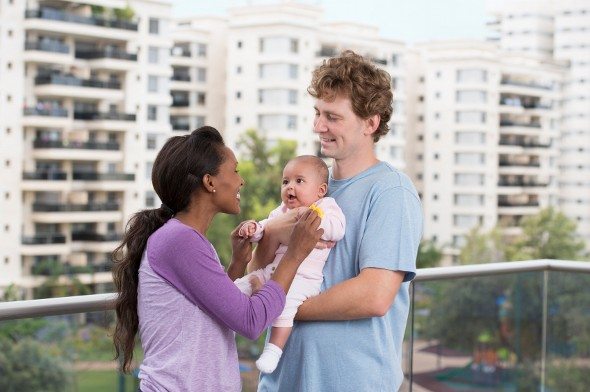 With rents rising steadily across the country, in many cases renting is no longer an affordable alternative to homebuying. Recent data from Harvard’s Joint Center for Housing Studies reported that 21.3 million renters were cost burdened in 2014. In other words, 46% of U.S. renters spent more than 30% of their income on housing-related expenses that year. And some are spending even more.

As rents climb, many families decide that they’re neither prepared nor interested in making the leap to homeownership. Fortunately, it is still possible to find affordable apartments in a number of U.S. cities.

To create our ranking of the most affordable cities for renters, SmartAsset collected rent data from apartmentmap.com. Based on guidelines set by the federal government, affordable housing costs households no more than 30% of their income. So we used fair market rents and a 28% rent-to-income ratio to calculate how much income households need to pay for two-bedroom apartments in the country’s 300 largest cities. (Read our full methodology below.)

Find out now: Is it better to rent or buy in your city? 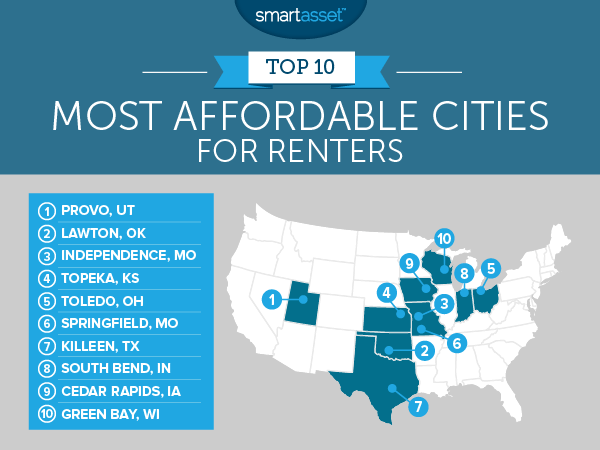 The average fair market price of a two-bedroom apartment in Provo has decreased by 10.8% since 2015, making it the most affordable city for renters. Median annual housing costs in Provo are $9,504, according to the U.S. Census Bureau. Since the median household income is $42,113, it’s possible for residents in the city to spend just 22.6% of their income on housing.

With a very low unemployment rate, for the most part anyone moving to Provo can expect to find plenty of career opportunities, particularly in the tech and healthcare sectors. The city also ranked as one of the best cities for working parents.

If you’re on the prowl for an apartment in Lawton, you only need to make $25,457 per year to afford an apartment with two bedrooms. That’s based on a 28% rent-to-income threshold. Lawton is 90 miles from Oklahoma City, where the fair market rent for a similar spot is 39.1% more expensive.

For the second year in a row, Independence ranks as one of the least expensive cities in America for individuals who would rather rent than buy homes. An apartment with enough room for you and a guest (or a roommate) will cost you $671 a month, on average. Not bad for a place that’s the fourth-largest city in the state of Missouri.

The capital of Kansas has a population of about 127,000. In this city where you’ll find the headquarters of Payless ShoeSource, you would need an annual salary of at least $28,800 to rent out a typical apartment. That’s roughly 63.6% of the city’s median household income.

Toledo is the fifth most affordable U.S. city for renters. Whether students in the city are graduating from the University of Toledo, Davis College or Mercy College of Ohio, they will likely find cheap rents if they’re looking for places to live.

The unemployment rate in Toledo is 10.8%, according to U.S. Census Bureau’s 2014 American Communities Survey. That’s on the high end of the spectrum, but if you’re looking for a new gig, you can try your luck at landing a position with one of the city’s major employers like the local colleges, The Toledo Hospital or Libbey Glass Inc.

Find out why the average rent is on the rise.

Known as the “Queen City of the Ozarks,” Springfield is home to multiple museums and historic sites. On average, you can expect to find a fair market rent of $681 for a two-bedroom unit. Based on our analysis, that’s affordable as long as you make $29,186 or more in a year. Median annual housing costs for the city are $8,172.

Living in Killeen could be worth considering if you don’t want to spend too much of your income on rent. It has a strong military presence due to its proximity to Fort Hood and employs many workers in the fields of healthcare and education. If you’re interested in earning another degree, you can check out schools like Central Texas College or Texas A&M University-Central Texas.

In South Bend, you’ll have enough money in the bank to rent a two-bedroom apartment if you have an annual salary of $29,357.  The average market rent of a unit with a couple of bedrooms is only 0.9% higher than it was in 2015, so it’s still relatively inexpensive.

Located in Northern Indiana, South Bend is also a great place for chocoholics. The South Bend Chocolate Company offers more than 500 different tasty treats. The business took off after it began making its products under a license from the University of Notre Dame, one of the major institutions in the area.

The second-largest city in Iowa has only 102,182 residents. With an unemployment rate of just 4.1% (according to 2014 Census Bureau data), the city has a lot to be proud of. It ranked as our top city for children and its high school graduation rate of 87% – according to the U.S. Department of Education – is particularly noteworthy.

Median annual housing costs in Green Bay add up to just $9,096. Our data shows that a household earning $30,043 can afford to rent a two-bedroom apartment in the city.

Besides its football fans and cheesehead hats, Green Bay has also been recognized for its contributions to the paper industry. Its distance from Milwaukee is about 120 miles. 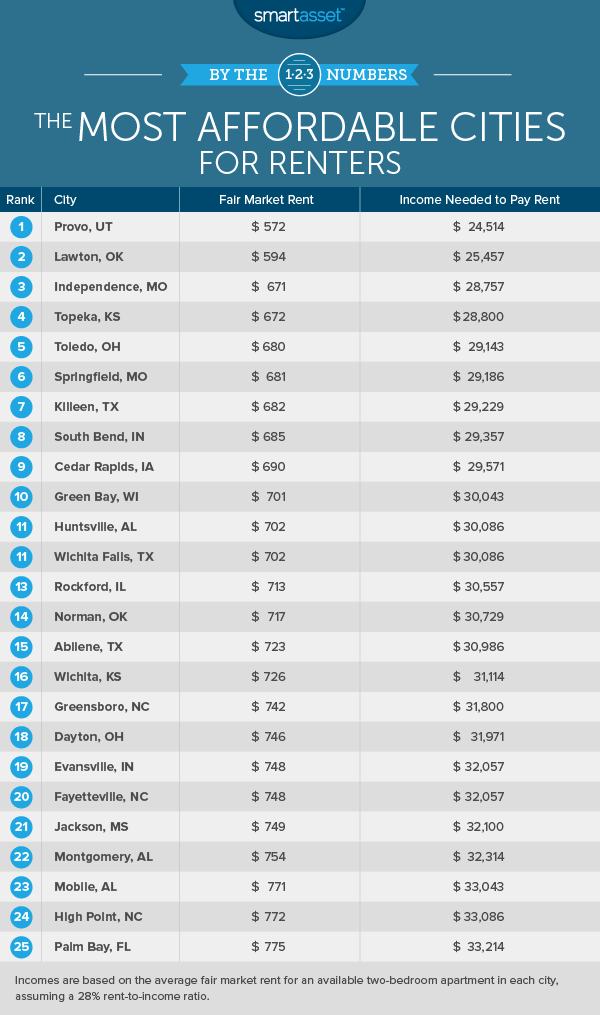 To find the most affordable cities for renters, SmartAsset looked at the fair market rents of two-bedroom apartments (for April 2016) in the 300 largest U.S. cities. The rental data comes from myapartmentmap.com, a site that analyzes millions of apartment listings to calculate the market rents in cities across the country.

The Department of Housing and Urban Development (HUD) says that housing is affordable if it costs no more than 30% of a household’s income. Because that 30% standard applies to all housing costs, including rent and utilities, we focused on a rent-to-income ratio of 28%. In other words, someone renting a two-bedroom apartment with an average market rent of $700 would need to make at least $2,500 a month before taxes (or $30,000 annually) in order for that rent to be considered affordable.

We crunched the numbers to find out how much income households needed to pay rent in all 300 cities. So the most affordable cities for renters are those that have inexpensive average fair market rents that don’t require households to make a ton of money.