The Most Livable Mid-Sized Cities in the U.S. 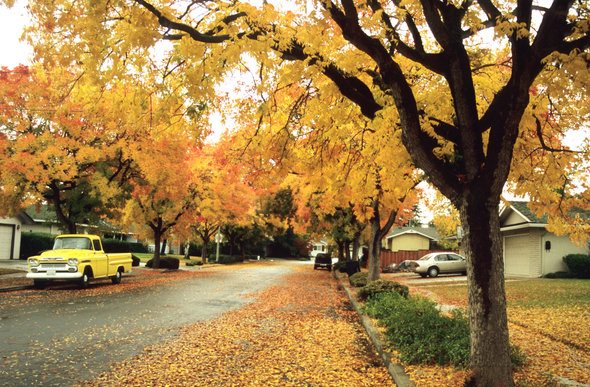 The best places to live are often the most expensive. This is especially true in some of the biggest cities in the country. But there are still some fantastic places in the United States boast more affordable homes, low unemployment rates and come without the hustle and bustle of big cities. Below we rank the most livable mid-sized cities in the country.

In order to rank the most livable mid-sized cities in the country, we looked at eight factors. We compared cities across the Gini coefficient (a measure of inequality), average commute time, uninsured rate, unemployment rate, median household income, poverty rate, monthly housing cost and median home value. For more on these factors, see the data and methodology below. 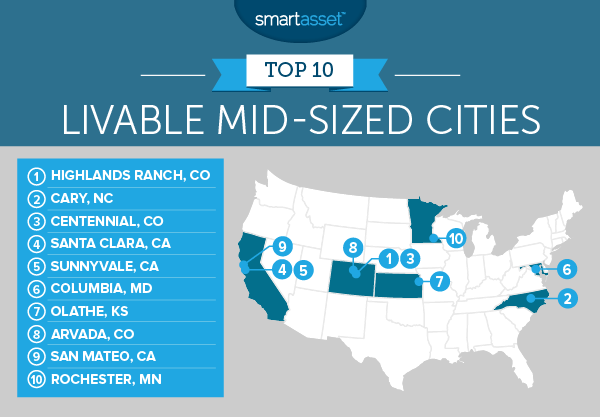 Financially speaking Highlands Ranch residents are also doing well. The average household earns over $111,000 per year. However, you may need a relatively large income to live here. The median home costs over $1,700 per month.

The unemployment rate is similarly low at 3.5%. That’s the third-lowest rate in the top 10.

However, many residents who live here tend to work relatively far from their jobs. The average resident had a 25-minute commute. That’s a below-average score.

Homes here are also really valuable. The median home here is worth over $846,000, the fourth-most in our study.

This city shares much with other cities in our top 10, like great employment opportunities and a low poverty rate. Sunnyvale is also a well-placed city to enable its residents to be high earners. It is located just southeast of Mountain View and Palo Alto.

Sunnyvale is also the city with the most valuable homes in our study. The median home here is worth almost a cool $1 million.

If you’re looking for a mid-size city with low income inequality, Columbia, Maryland could be your best bet. Columbia has a Gini coefficient of only 0.36, the best score in the top 10. This city is also chock-full of high-earning households. The median household income here is just over $100,000.

One concern for residents, however, is that getting to work can be a long process. The average commute for Columbia residents is just shy of 30 minutes. That means almost one hour per day getting to and from work.

If you are looking for work, Olathe, Kansas is a good place to be. The unemployment rate here is only 4%. One area where Olathe beats other cities in our top 10 is in affordability. The average home here costs $1,200 per month. That’s the second-lowest median cost in the top 10.

If you’re looking for steady employment Arvada is a great city to live. Only 4.4% of residents are unemployed. Another perk of living here, other than the availability of jobs, is that work here tends to pay well. The median household earns just shy of $70,000 per year. Over 90% of residents have an income which puts them above the poverty line.

If paying a ton in housing makes you queasy, San Mateo may not be the place for you. Average housing costs top $2,100 per month. However if living in a place where jobs are available and those jobs pay well excites you, consider San Mateo. The California city ranks in the top 15 for those two metrics.

Our top 10 ends in Rochester, Minnesota. Rochester has many factors working in its favor. For example, home payments will only set the average resident back $970 per month. For that metric Rochester has the best score in our top 10.

Another plus to living here is the short commute times. It takes the average Rochester resident only 16 minutes to get to work. That certainly makes for a stress-free morning! 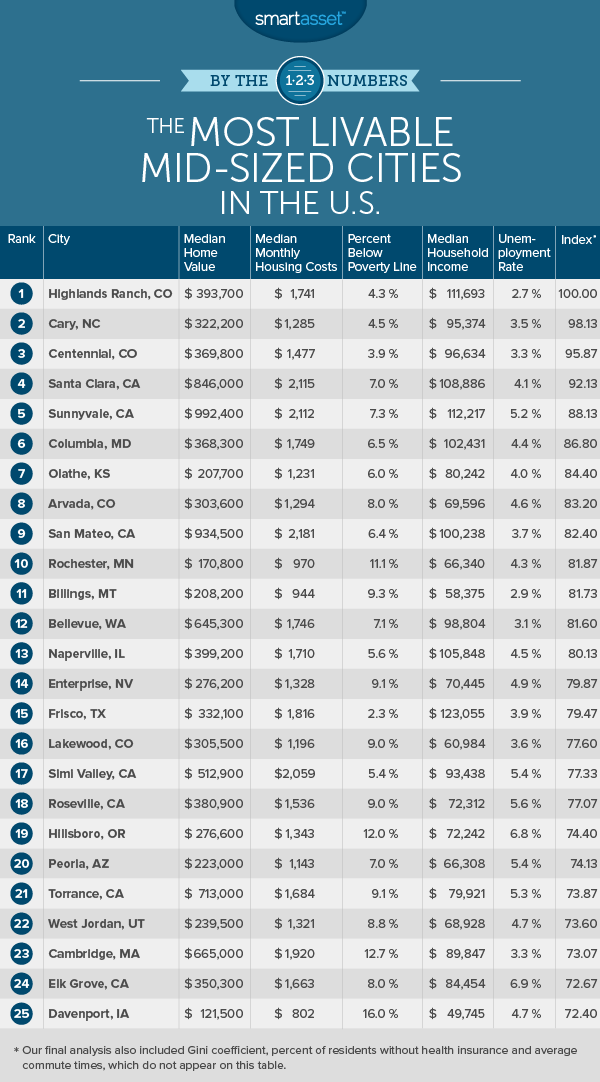 In order to rank the most livable mid-size cities, SmartAsset looked at data for 174 cities. We looked at data for cities with populations above 100,000, excluding the 100 largest cities in the country. We compared these cities across the following eight metrics:

Tips for Saving up to Buy a Home

Switching from renting to buying can be tough. Here are some tips to help you hit your financial goals.

Like with any financial objective, having a budget will keep you organized. Keep in mind when it comes to buying a house, you are not just buying a house. You will need to factor in the down payment and also closing costs. All these are different parts of the home-buying experience you’ll need to budgeting for.

The first part of buying a home is typically saving up for the down payment. It is usually recommended that a prospective home buyer puts down 20% of the home value – though this may differ depending on your financial situation and your lender. In order to save up for that, it may make sense to cut back and save more. Take a look at your spending habits and see where you can cut back. This will differ from person to person. For some it may mean eating out less and for others it could even mean moving into cheaper accommodation.

Another good option is to put financial windfalls like your tax return or work bonuses into a savings account, which is easily accessible. Once you have saved up a chunk and are ready to house hunt, check out our how much home you can afford calculator. It will provide a breakdown of what you can expect to pay and what you can realistically afford. One way to keep housing costs low is to get a low mortgage rate. It may make sense to make sure your credit report is as strong as it can be before you apply for a loan. This will likely work in your favor when it comes to getting a favorable mortgage rate.