Healthiest Cities in the United States 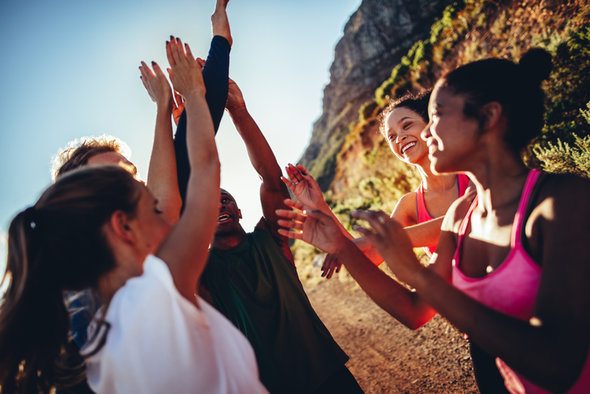 Healthcare is one of the fastest-growing expenditures in the country. Nationwide healthcare costs reached over $10,000 per person in 2016 and that figure’s expected to grow at a 5.8% clip until 2025, according to a report in the Health Affairs journal. One way to keep those costs down is to take care of your health. Of course many illnesses and health issues are unavoidable, but behaviors like regular physical activity and abstaining from tobacco use are good ways to avoid unwanted trips to the doctor’s office.

In order to find the healthiest cities in the United States, we looked at data on obesity rates, smoking rates, physical inactivity rates, excessive drinking rates and the percent of the population who has health insurance. Read our data and methodology section below for more details on how we put the study together. 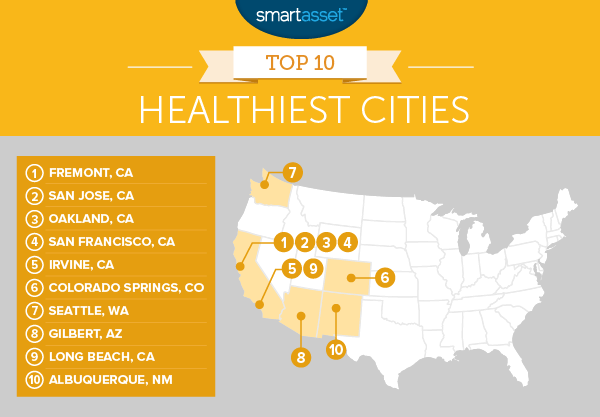 Fremont takes first place in our study of healthiest cities. This Bay Area suburb with a population of 230,000 has top five scores in three different metrics. Specifically, it has the fifth-highest health insurance rate (93%), third-lowest smoking rate (10.6%) and third-lowest physical inactivity rate (14.7%). With the Don Edwards National Wildlife Refuge, Mission Peak Regional Reserve and the Coyote Hills Regional Park all relatively close by, it isn’t too surprising that Fremont residents are active during their leisure time.

The Capital of Silicon Valley comes in just behind Fremont. San Jose has an even lower smoking rate than Fremont: only 9% of adults in San Jose smoke compared to Fremont’s 10.6%. However, the lower percent of people in San Jose with health insurance is what drops the city down the ranking. About 89% of San Jose residents have health insurance. Certainly a high number but not enough to take the top spot. Overall, the city contains 15,950 acres of parkland within the city limits. According to the Trust for Public Land, San Jose has the 11th-best park system in the country, so there’s no excuse to not get out and about. Just 15.3% of the city’s adult population report that they don’t engage in physical activity for leisure.

Oakland, California claims the third spot in our ranking of the healthiest cities. Residents in Oakland are some of the most active during their leisure time. Only 14.7% of Oakland adults report doing no physical activity during leisure time. One thing dragging Oakland down the rankings however, is its health insurance rate. Only 86% of Oakland residents have health insurance. That number is lower than the national average of 87%, according to Census Bureau data.

San Francisco finishes behind its Bay Area neighbors. It has top 10 scores in four out of our five metrics, including the second-lowest obesity rate in the study. Just 14.8% of people in SF are obese. Only New York has a lower rate. So why didn’t the City by the Bay finish higher? Too much alcohol. San Francisco residents have one of the worst incidents of excessive drinking in the study. Almost 20% of adults meet the criteria for engaging in excessive drinking.

Irvine, a Southern California city which we found is one of the most livable cities in America, takes the fifth spot. San Francisco and Irvine share a few traits in common when it comes to healthy behaviors. Like San Francisco, the obesity rate in Irvine is low: less than 20% of Irvine adults are obese. Plus, a whopping 92% of people in Irvine have health insurance. That rate is the second-highest in the top 10 and is similar to SF’s 91.5%. However both cities took a hit when it comes to excessive drinking. More than 19% of adults in Irvine engage in excessive drinking. It ranks 69th in that metric.

Colorado Springs residents are some of the most active in the country. Over 84% of adults here report doing some physical activity during their leisure time. Makes sense with the Garden of the Gods, a national landmark, right in their backyard. The park offers lots of hiking, rock climbing and mountain biking opportunities. About 16% of adults in Colorado Springs engage in excessive drinking. That’s the fourth-lowest rate in the top 10.

Despite being one of the hardest-working cities in the country, Seattle residents still find time to get up and move around. Seattle has the third-lowest rate of physical inactivity at 14.7%. Unfortunately for their overall health, people here seem to enjoy their alcohol. Over 21% of Seattle adults engage in excessive drinking. Seattle ranks 86th in that metric. 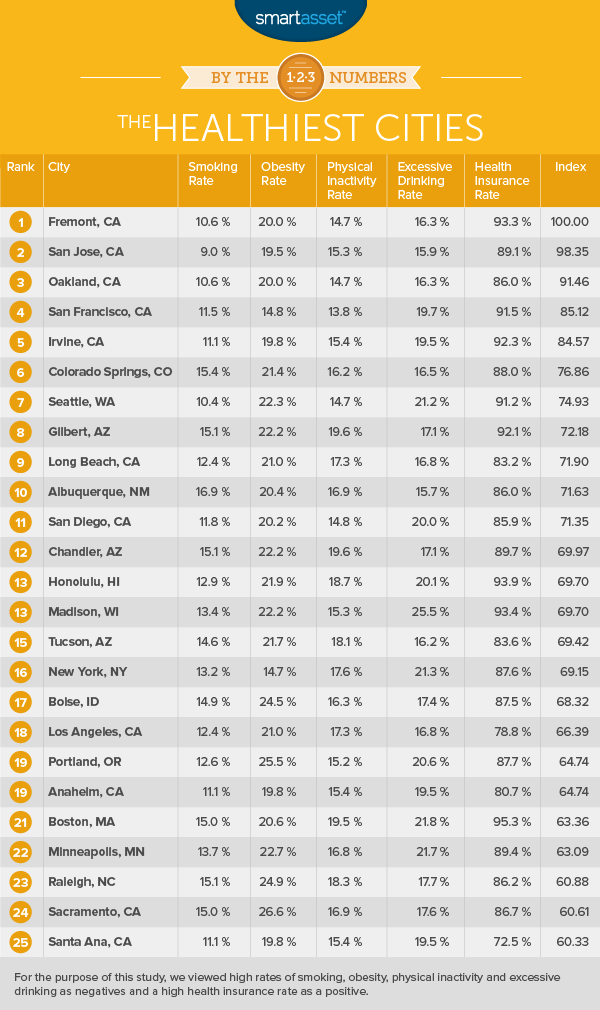