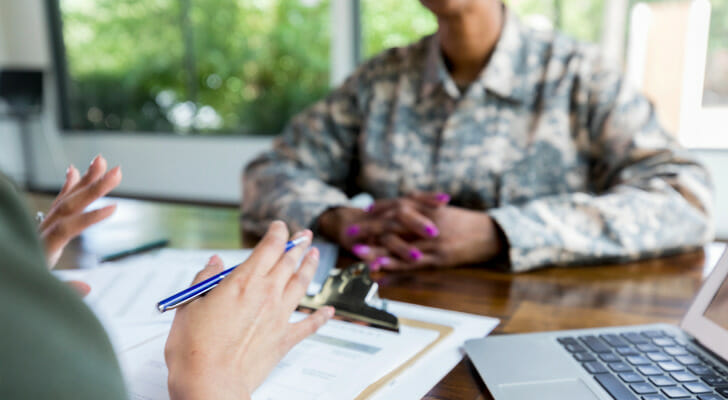 How easily veterans adjust to their lives after service depends on many factors, not the least of which is their ability to maintain adequate finances to cover their home payments and daily needs. There’s good news for vets on that front, though: While about 37,000 veterans still experienced homelessness in January 2019, the homelessness rate among veterans declined more than 2% in 2019 and had decreased 50% since 2010, according to a 2019 report from the Department of Housing and Urban Development (HUD). Despite that marked improvement, not all places are equally suited to help veterans thrive. That’s why SmartAsset crunched the numbers in all 50 states and the District of Columbia to find the best places for veterans.

To do so, we looked at data across nine metrics: veterans as a percentage of population, veteran unemployment rate, overall unemployment rate, percentage of veterans living below the poverty line, housing costs as a percentage of median income for veterans, percentage of a state’s businesses owned by veterans, number of VA health centers per 100,000 veterans, number of VA benefits administration facilities per 100,000 residents and taxes on military pensions. For details on our data sources and how we put all the information together to create our final rankings, check out the Data and Methodology section below. 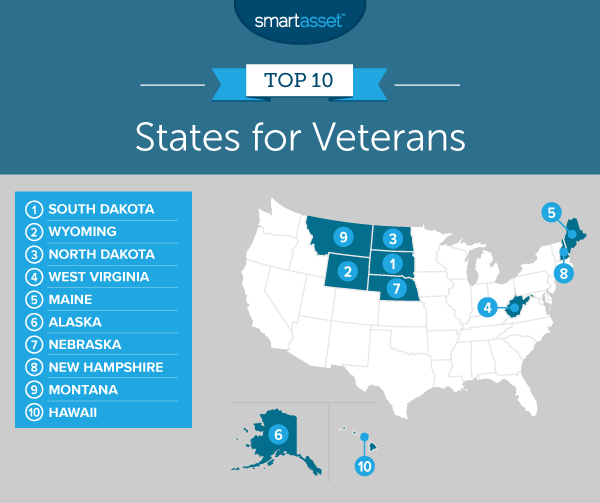 Wyoming takes the runner-up spot. Wyoming has the highest number of VA health facilities in the country, at 28.99 per 100,000 veterans. It also does not tax military pensions. Wyoming finishes in the bottom half of the study in terms of the percentage of veterans who are living below the poverty line (coming in at 38th, with a percentage of 7.1%). However, the veteran unemployment rate in the state is 1.0% – second-lowest in the study – so veterans looking for work could do worse than thinking about the Cowboy State.

West Virginia has housing costs that make up just 18.95% of the median veteran income, the best rate for this metric in the study. The Mountain State has the sixth-highest concentration of VA health facilities in the study, at 12.39 per 100,000 veterans, and the third-highest number of VA benefits administration facilities, at 5.78 per 100,000 residents. Military pensions are not taxed in this state. See more about retirement tax friendliness in West Virginia here.

Maine is one of two Northeastern states to be ranked in the top 10, and it gets there partially on the strength of its 1.3% veteran unemployment rate, ranking fourth-lowest in the country. Maine’s population is made up of 8.89% veterans, the eighth-highest percentage for this metric. Maine also has 5.13 VA benefits administration centers per 100,000 residents, ranking sixth-best. There are no taxes on military pensions in the Pine Tree State.

Also known as The Last Frontier State, Alaska has a relatively small population, but one that is 10.74% veterans, the highest percentage for this metric across all 50 states and the District of Columbia. Alaska also comes in first for the metric measuring the percentage of businesses owned by veterans, at 11.60%. The state doesn’t do nearly as well, though, when it comes to employing veterans, as the unemployment rate among veterans is 6.3%, near the very bottom of the study. On the plus side, the state does not tax military retirement pay.

Nebraska had an overall unemployment rate of just 3.5% in September 2020, the lowest in the country, and that rate is particularly impressive amid the COVID-19 pandemic. Nebraska also has the fifth-best unemployment rate for veterans, at just 1.4%. Nebraska taxes some portion of military pensions, making it one of two states in the top 10 of the study where military pensions are not completely tax-free.

Veterans in New Hampshire own 9.42% of the state’s businesses, placing the Granite State at 12th overall for this metric. The entire population of the state is 8.52% veterans, the 14th-highest rate for this metric across all 50 states and the District of Columbia. New Hampshire performs relatively poorly in terms of housing affordability: The average housing cost represents 36.25% of the median veteran income, sixth-highest in the study. However, Military pensions are tax-free in the state. Those who are seeking assistance with balancing all of these financial factors may wish to consult our roundup of the top 10 financial advisors in New Hampshire.

Veterans will find a built-in community in Big Sky Country, where the population is 10.28% veterans, second-highest in the study. That said, Montana taxes military pensions fully – the only state in our top 10 to do so and one of just seven to do so nationwide. Still, Montana ranks ninth for both of the unemployment metrics we measured, with a veteran unemployment rate of 2.3% and an overall September 2020 unemployment rate of 5.3%.

Hawaii places first in this study in terms of number of VA benefits administration facilities, at 6.64 per 100,000 veterans. It is important to note, though, that the Aloha State had an unemployment rate of 15.1% in September 2020, ranking last for this metric in the study. Furthermore, housing costs make up 39.41% of median veteran income, second-worst overall. However, only 5.8% of veterans are living below the poverty line, good for 12th overall. The state also has top-20 rankings for veterans as a percentage of the population, veteran-owned businesses as a percentage of all businesses and VA health facilities per 100,000 veterans.

To conduct the 2020 version of our study on the best states for veterans, we compared all 50 states and the District of Columbia across the following metrics: