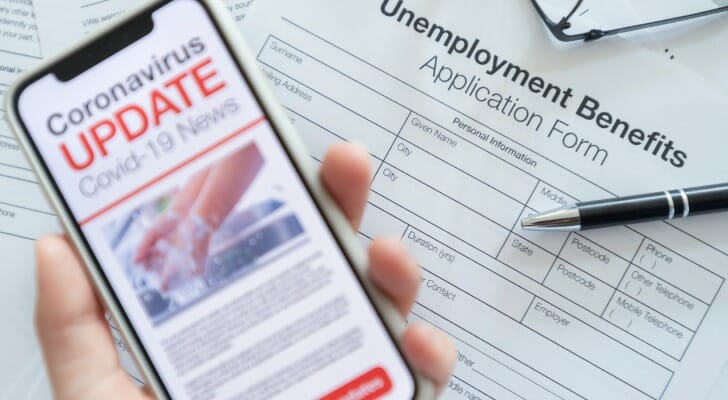 Nationally, unemployment has slowly fallen since its initial record spike in April as a result of the COVID-19 pandemic. The Bureau of Labor Statistics (BLS) reported last month that the national August 2020 unemployment rate was 8.4%. More recently, on Wednesday, September 30, the BLS released metro area unemployment rates for August 2020. The data shows a wide range of unemployment rates across the U.S., suggesting that workers in some areas are struggling more than others – which in turn affects their ability to meet their expenses and save adequately for other financial goals.

In this study, we examined unemployment across the 389 U.S. metro areas. We identified the places with the highest and lowest August 2020 unemployment rates and determined where unemployment has risen the most relative to pre-pandemic levels. For details on our data sources and how we put the information together to create our final rankings, check out the Data and Methodology section below.

Where August 2020 Unemployment Is Highest and Lowest

Unemployment is additionally 15% or more in four other metro areas – Atlantic City-Hammonton, New Jersey; Yuma, Arizona; Las Vegas-Henderson-Paradise, Nevada and Los Angeles-Long Beach-Anaheim, California. The table below shows the 11 metro areas with the highest August 2020 unemployment rates. In all 11 places, unemployment is at least 4.6 percentage points higher than the August 2020 national rate. 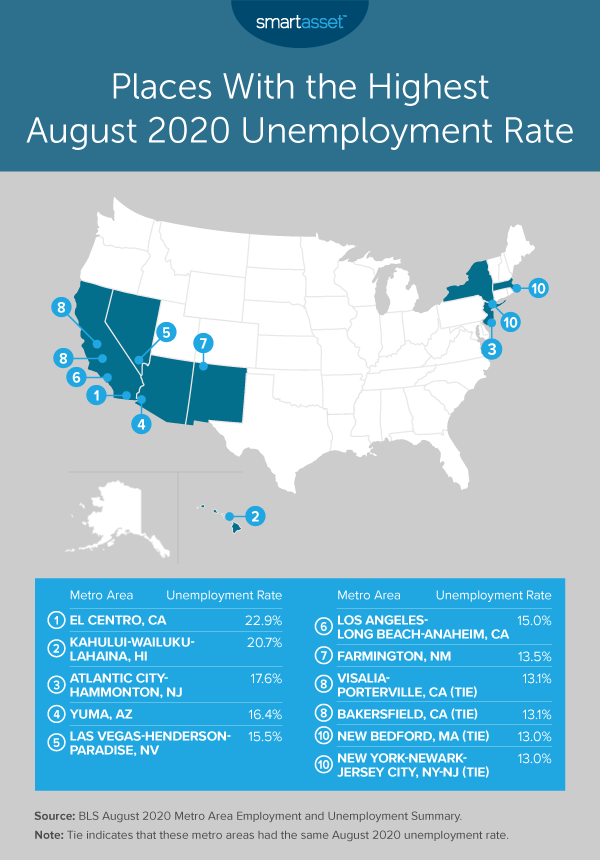 Though many areas are struggling, some places have maintained relatively low unemployment levels. The August 2020 unemployment rate is the lowest in Idaho Falls, Idaho – at 2.7%. In nine other places, the rate is also lower than 4%. All 10 places are highlighted on the map below. 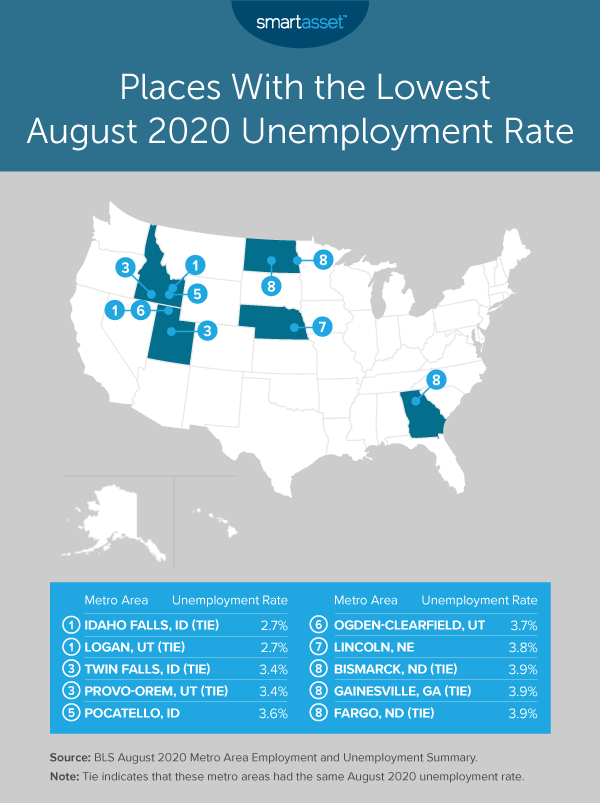 Where August 2020 Unemployment Is Highest Compared to Pre-Coronavirus Levels

In a previous study, we looked at the difference in February and April 2020 unemployment rates. With more recent data available, we investigated where unemployment remains the most elevated relative to February 2020 rates. Kahului-Wailuku-Lahaina, Hawaii sits at the top of the list. Its August 2020 unemployment rate of 20.7% is 18.0 percentage points higher than it was in February 2020. This percentage-point increase marks roughly 14,600 newly unemployed workers in the area.

In nine additional metro areas, August 2020 unemployment is more than eight percentage points higher than it was in February 2020. Of those, New York-Newark-Jersey City, New York has the highest total current number of unemployed workers. Though the metro area ties for just the sixth-highest unemployment rate in August, at 13.0%, its high population density means that 1.3 million workers in the area are currently out of a job. This is almost 923,000 more than were out of work prior to COVID-19. The table below shows the 35 metro areas with the most elevated August 2020 unemployment rates relative to February 2020.

Tips for Making it Through the COVID-19 Recession