The Best State Capitals to Live in for 2015 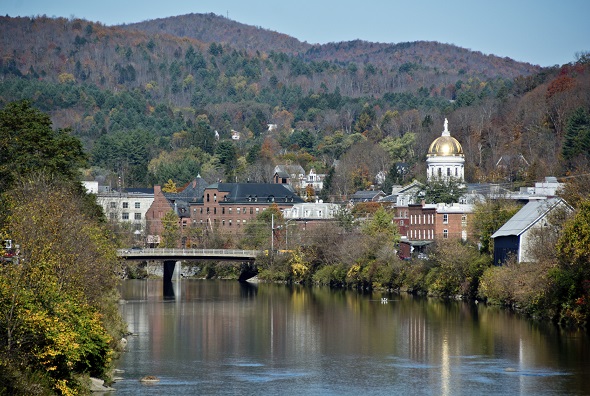 What’s your favorite state capital? Those who like sunshine might say Phoenix or Santa Fe. Mile High Denver might be the preferred choice of mountaineers and skiers, while sailors might love Annapolis. College football fans, meanwhile, could favor Madison or Austin (depending on their allegiances). And, of course, it’s hard for anyone to argue against a week (or two) in Honolulu.

This is the 2015 version of SmartAsset’s study of the best state capitals to live in. Check out the 2016 ranking here.

To that end, we collected data on crime, unemployment, amenities and the cost of living in each of America’s 50 state capitals (plus DC). We compared every city by these metrics to determine which have the highest quality of life. (Read more about our methodology below.)

Is it better to rent or buy? 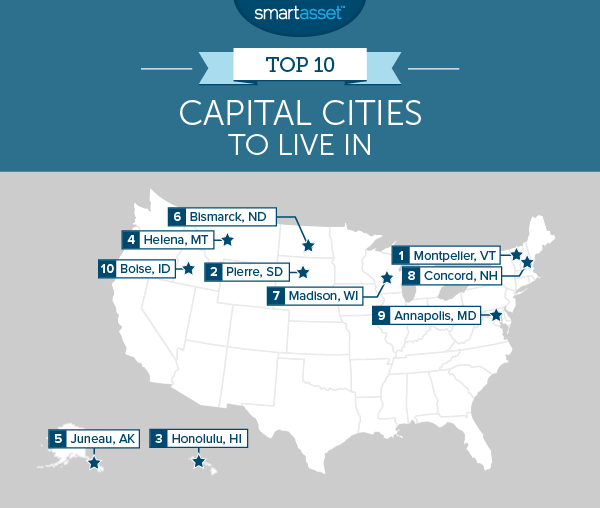 Situated along the Winooski River in the foothills of Vermont’s Green Mountains, Montpelier is a charming and peaceful New England town. It is the smallest state capital by population, with under 8,000 residents. It is also the safest.

Montpelier’s violent crime rate of 103 per 100,000 residents is half that of the second safest capital, nearby Concord, New Hampshire.  While the property crime rate isn’t quite as low, with 2,678 per 100,000 people, it still ranks among the bottom five. Montpelier also rated first for its concentration of dining and entertainment amenities, with 31 such establishments for every 10,000 people.

For the second year in a row, Pierre ranks as the second best state capital to live in. Though unemployment has only dropped by a tenth of a percent since last year, from 3.1% to 3%, that is still the third lowest unemployment rate of any capital city.

Pierre also has the sixth highest median household income of any state capital at $55,063. With no state income taxes to pay, workers in Pierre get to take home a larger slice of their salaries than those in many of the other top capital cities.

Hawaii’s largest city enjoys average temperatures that range from 73° at the coldest to 82° at the warmest. It has miles of beaches and access to some of the best surfing in the world. It also offers a unique and world-renowned cuisine.

Those are all great reasons to visit, but more basic concerns make it a great place to live. Honolulu’s violent crime rate is well below the national average (230 per 100,000 residents compared to 367.9 nationally) and ranks as the fourth lowest of any capital city. Its unemployment rate of 3.7% is also well below average, meaning it shouldn’t be hard to find a job in the Hawaiian capital.

The state motto of Montana is “Oro y Plata,” the Spanish words for gold and silver. It’s a nod to the importance of the mining industry throughout the state’s history. Along with mining, major industries in the Helena area include agriculture and education. The public sector is also very important, employing about 30% of the city’s workforce. Helena’s unemployment rate is just 2.7%, third lowest of any state capital.

For the second year in a row, Juneau ranks among the top 5 state capitals to live in. It slid from first in 2014 largely because of shifts in the national economy. While many other capital cities saw unemployment fall by more than 1% from 2014 to 2015, Juneau’s unemployment fell just 0.3%, from 4.8% last year to 4.5% today.

Nonetheless, it remains one of the best capital cities in the country to call home. Discretionary income (that is, income after housing costs) is the highest of any state capital. According to the U.S. Census Bureau median household income in the Alaska capital is $81,490.

North Dakota rated as the second best state for homeowners in a recent SmartAsset analysis and the housing market in Bismarck reflects that. Despite having an unemployment rate of just 2.3%, Bismarck boasts some of the most affordable housing of any state capital. Median annual housing costs for Bismarck residents are just $8,916, according to the U.S. Census Bureau, lower than all but five other capital cities.

Indeed, the Capitol dome can be seen from either of the two large lakes that border the city center, Lake Mendota and Lake Monona. In addition to its unique skyline and scenery, Madison also boasts some of the lowest crime rates of any state capital.

Located on the Chesapeake Bay, east of the District of Columbia, Annapolis may be most well-known as the home of the U.S. Naval Academy. Long before any Midshipmen were trained in Annapolis, however, the functions of the Maryland government were administered there.

The Maryland legislature’s first gathering in the Maryland State House occurred in 1779. Today, Annapolis has the second highest median household income of any state capital at $72,462.

Located in Idaho’s “Treasure Valley,” Boise combines some of the most spectacular scenery of any state capital with a strong job market and safe streets. The unemployment rate in Boise is just 2.9%, while the city’s crime rates rank among the five lowest of all state capitals.

To determine which capital cities have the highest quality of life, we looked at the following five metrics:

We ranked each capital city, along with Washington D.C., on these five metrics and averaged those rankings. (Note: We gave 70% weight to violent crime and 30% weight to property crime in order to create a single ranking for overall crime.)

This methodology involves some slight changes from SmartAsset’s 2014 analysis. Last year, our discretionary income metric incorporated per capita income and median rent. This year, it is based on median household income and median housing costs, which better represents the financial realities facing households in these cities.

Additionally, the dining and entertainment establishments metric last year included all types of restaurants. This year we restricted it to full service restaurants, which excludes fast food or counter service establishments.

Data on violent crime and property crime rates came from the FBI’s Uniform Crime Reporting database as well as local government websites. Data on the unemployment rate came from the Bureau of Labor Statistics. Data on median income and median housing costs came from the U.S. Census Bureau, as did data on the number of dining and entertainment establishments per capita.

Read the 2016 version of SmartAsset’s study of the best state capitals to live in.