The Best Cities for Renters in 2019 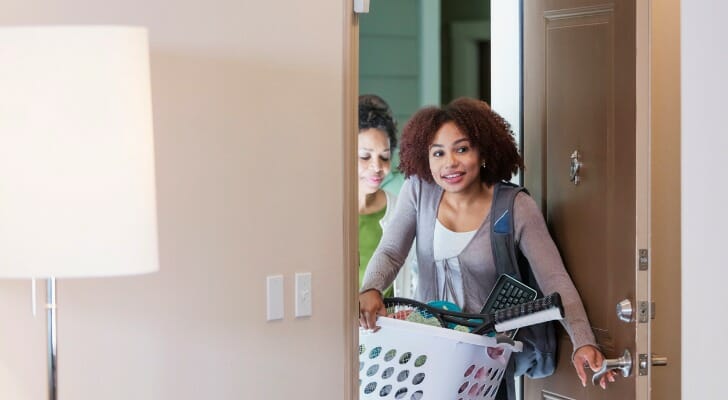 If you’re still saving up for a mortgage on your first home, it’s likely that you’re paying rent. But what if you could optimize your situation as a renter in order to build up those funds for a down payment more quickly? As you’ve probably guessed, there are some cities where renting is easier than in others. That’s why SmartAsset considered factors such as rental costs, commute times, the possibility of eviction and other information to figure out the best cities in America to find a place to rent.

We considered a number of factors to find the best cities for renters. To be specific, we examined the following seven metrics: the percentage of renters who are rent cost-burdened, the percentage of housing stock dedicated to renters, entertainment establishment density, crime rate per 10,000 residents, average commute time, unemployment rate and eviction rate. For details on our data sources and how we analyzed the information, see the Data and Methodology section below.

This is SmartAsset’s second study on the best cities for renters. Read the 2018 study here. 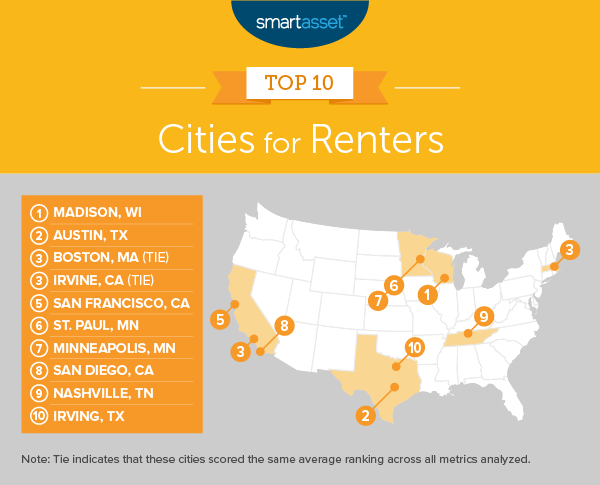 Madison, the capital of Wisconsin, leads our top 10 for the second year in a row. The unemployment rate is just 2.6%, the lowest of any city in our study. Madison also has the 11th-lowest eviction rate in the study, just 0.57. The average commute is just 19.9 minutes. Almost half of all households are rental units, and 49% of renters are housing-cost burdened.

Austin, Texas comes in second on our list of the best cities for renters in America. It has a low unemployment rate, just 3%, the sixth-lowest in the study. The data also bears out Austin’s reputation as a city with a robust entertainment scene, showing that 2% of the city’s establishments are devoted to entertainment. Austin’s percentage of rent-cost burdened residents is 45%, a top-25 rate. Residents who are not rent cost-burdened have a better chance of socking away money in their retirement funds.

Boston, Massachusetts ties for the third spot, and it has a big rental market: Approximately 63% of all households are occupied by renters, the eighth-highest percentage in our study. The average commute time, on the other hand, is on the longer side, ranking 66th overall and lasting 30.8 minutes. But at least Boston isn’t one of the most expensive cities for transportation. Boston has the 14th-lowest crime rate in the study, at approximately 276 violent and property crimes per 10,000 residents.

The first California city on our list is Irvine, in Orange County. Irvine has the lowest crime rate in our study, at just 138 violent and property crimes per 10,000 residents. It ranks 7th in the study overall for its unemployment rate, 3.1%, and it holds a top-15 eviction rate. Irvine doesn’t fare as well when it comes to entertainment options, as just 1.3% of all establishments are for entertainment.

San Francisco is fifth in our top 10, and it has a very low percentage of rent cost-burdened people – just 36% of renters pay more than 30% of their income on housing. That’s the second-lowest rate in the study. Remember, though, that relatively higher salaries, as opposed to more reasonable rents, could be a contributing factor. San Francisco is tied with Madison, Wisconsin for the lowest unemployment rate in our study at 2.6% and has the fifth-lowest eviction rate at 0.25. If you work at a job that pays enough money, San Francisco can be a fairly renter-friendly city.

St. Paul is the first of two Minnesota entries on this list and is tied for the seventh-lowest unemployment rate in our study, at 3.1%. It also has an eviction rate of 0.64, a top-15 rate. The average commute in St. Paul is 23.7 minutes, and 48% of renters in the city are rent-cost burdened.

Next is St. Paul’s twin city, Minneapolis. The Minnesota city is tied for the fourth-lowest unemployment rate in this study, at 2.9%. There are around 574 crimes committed per 10,000 residents. The average commute time for Minneapolis residents is 23.5 minutes. Only 46% of residents in the city are rent cost-burdened, a relatively low rate for this study: Minneapolis ranks 27th out of 79 cities overall in this metric.

The final California city on this list is San Diego. This city has the 10th-lowest crime rate in our study, with 221 violent and property crimes per 10,000 residents. It also ranks 18th overall for unemployment rate, at 3.5%. Approximately 53% of all renters in San Diego are dealing with rent cost-burden, and about 51% of all households are occupied by renters. The average commute for a San Diego resident is 24.7 minutes.

Nashville, Tennessee is another city known for its vibrant entertainment scene, and it shows here, with 4.4% of all establishments dedicated to entertainment, a top-five rate. That, in part, is why Nashville is also one of the best cities for new college grads. Only 43% of renters in this city are rent cost-burdened, the seventh-lowest rate for this metric in the study overall. Nashville’s unemployment is the third-lowest in the study at 2.7%.

Irving, Texas is the final city in the top 10. It has the lowest percentage of cost-burdened renters in this study, at approximately 33%. Irving also has a high percentage of rental units in its housing stock, with approximately 58% of all homes occupied by renters. That’s a top-15 rate. The unemployment rate in Irving is 4%. 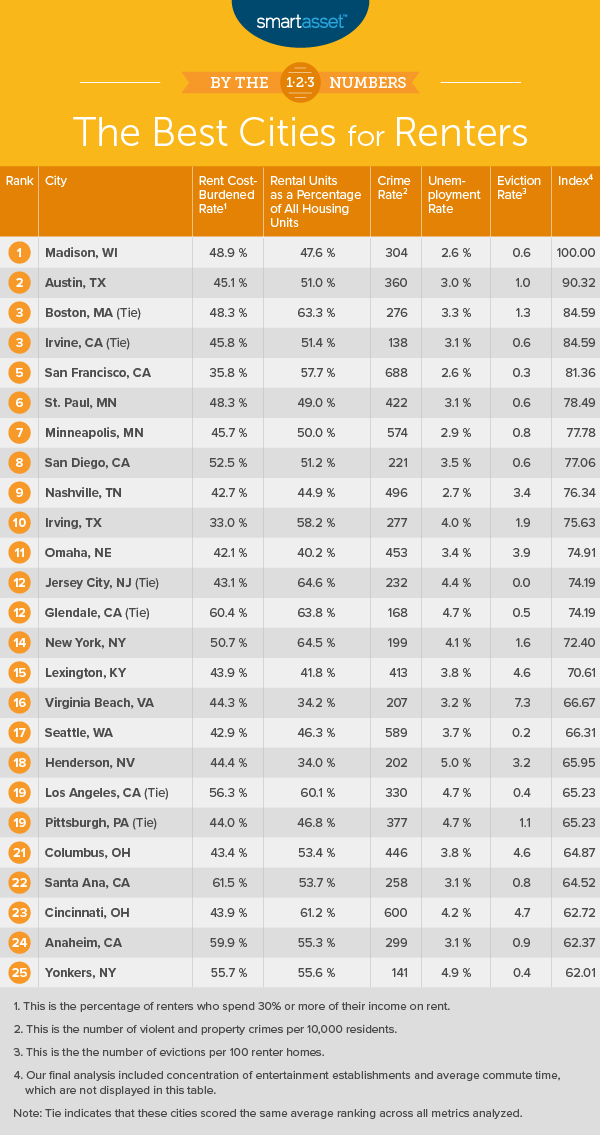 SmartAsset compared data for 79 cities to find the best cities for renters. Specifically, we considered the following seven metrics: