Around 64% of Americans drink a daily cup of coffee, while 11% drinks four cups or more. This makes coffee not only one of America’s favorite beverages but also the preferred fuel for getting the day started. For those Americans who are fanatical about their cups of joe,  where they live can have a big impact on the quality, quantity and cost of coffee they are consuming. For the third year in a row SmartAsset has crunched the numbers to find America’s coffee mecca or the best cities for coffee fanatics.

This is SmartAsset’s 2018 version of this study. Check out the 2017 version here. 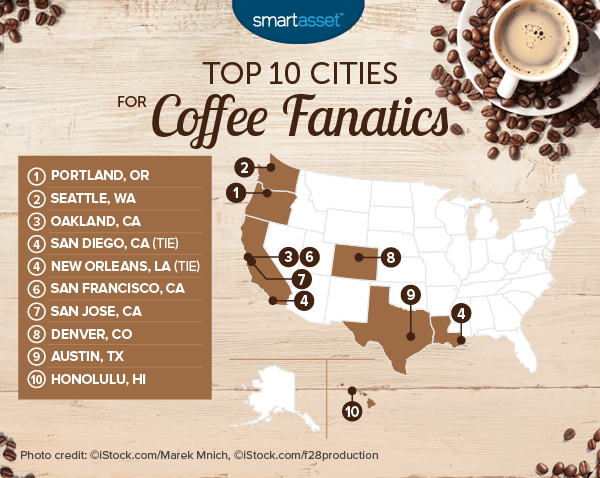 The coffee shops here are also great places to try that freshly roasted coffee. According to our data, 31 coffee shops in Portland have an average rating of 4.5 or above.

Although Seattle fell one spot in this year’s analysis, it is still a great city for coffee fanatics. One reason why coffee fanatics will like Seattle is that they will be among fellow passionate coffee drinkers. Residents in only two other cities in our data set Google coffee as much as Seattle residents do. This city also has the third-most roasters and the sixth-most total coffee shops.

However, as residents will know, the cost of living in Seattle is high, which hurts its overall score. The average cost of a cappuccino for example is $4.21, according to our sources.

In third is Oakland. This city ranked well in our quality metrics. The Bright Side of the Bay has five roasters in the area, which is the eighth-most in our study. Those help keep the 623 coffee shops in the city topped off with coffee beans. Oakland also has 22 coffee shops which have an average Yelp rating at or above 4.5.

While not the most affordable, coffee in Oakland is not pricey by the standards of this top 10. The average cappuccino in Oakland costs $3.87. That’s the least expensive in our top 10 and seventh-lowest in our top 25.

If you are a coffee fanatic who loves spending time at cafes, San Diego might be the city for you. This city has 32 coffee shops with an average Yelp rating at or above 4.5 stars. If those places get crowded there should still be other places to enjoy a nice cup of coffee. Our data shows there are almost 1,900 coffee shops in San Diego, fifth-most in our study.

New Orleans is famous for its unique blend of cultures. One fruitful yield from this cultural blending process has been a coffee style unique to the city. As part of the brewing coffee, some cafes mix chicory into their coffee reflecting the French influence on the city.

But New Orleans is no one-trick pony. The city has 22 cafes with a rating at or above 4.5 stars, according to Yelp. New Orleans also has seven local roasters, the fourth-most in our study.

But if you plan on having most of your coffees made by a professional barista it will cost you – just like everything else in San Francisco. The average cappuccino costs almost $4.35, according to our data.

San Jose has plenty to offer for coffee lovers. Residents here Google “coffee” at the sixth-highest rate relative to the other cities in the study, a sign that people in the area are passionate about coffee, or at least thinking about it often.

This city also has 940 cafes, 21 of which have an average rating at or above 4.5 stars on Yelp. San Jose also comes with three dedicated coffee roasters, not a record-breaking number, but enough to secure this city a top 10 spot.

In Denver you will find that quality coffee comes at a steep price. This city has the fourth-most roasters in our data set and the sixth-most coffee shops which are rated 4.5 stars or above by Yelp.

When it comes to pay though you may want to pull out your best rewards credit card. The average cappuccino costs just under $4.20, fourth-highest in our top 10.

With over 1,100 coffee shops, few cities can match Austin when it comes to variety. This city isn’t lacking when it comes to quality either. There are 22 exceptional cafes in the city, which have an average Yelp rating at or above 4.5.

Our list ends in Hawaii’s capital, Honolulu. Residents here seem to be some of the most enthusiastic about coffee, at least judging by their Googling habits. No city in the study Googles “coffee” as much as Honolulu residents do.

Furthermore, Honolulu has 248 coffee shops per 100,000 residents, third-most in our study. The only thing holding Honolulu back from shooting up our rankings is price. At an average price of $4.65, Honolulu has the most expensive cappuccino in our study. 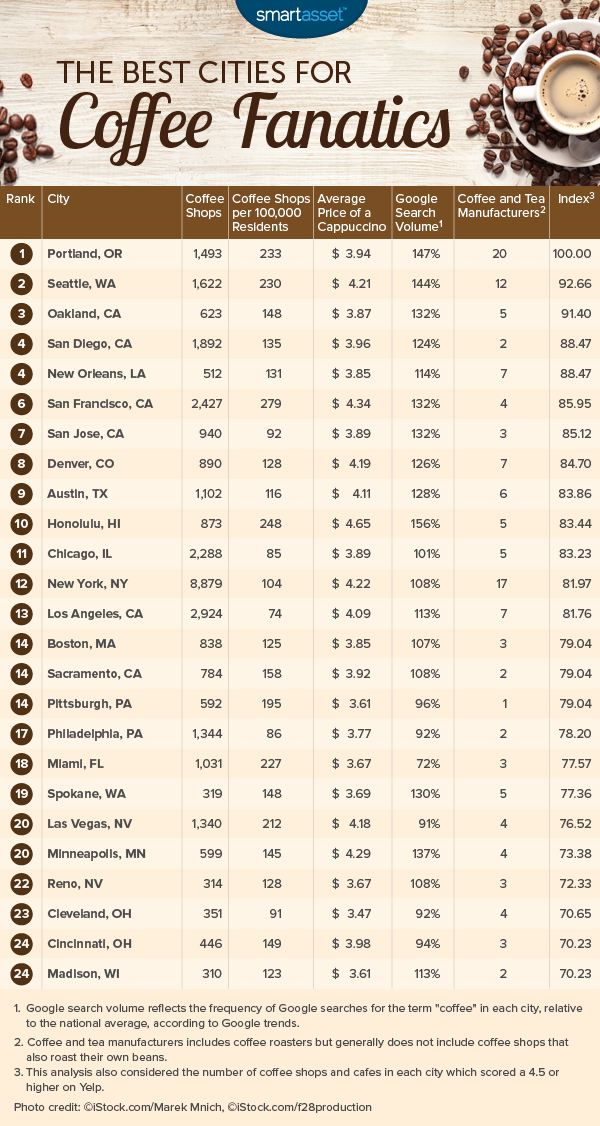 In order to find the best cities for coffee fanatics, we looked at data on the 100 largest cities in the U.S. Specifically we looked at the following six metrics:

Tips for Cutting Costs on Your Daily Cup of Joe

While spending $3 or $4 per coffee may not seem like a lot, those costs can add up. If you spend $4 per day on coffee, that equals $1,460 per year. That’s money that could have gone in your savings account or toward your retirement!

One way to cut down those costs is to brew your coffee at home and take it with you on your commute. Grocery store prices will always beat coffee shop prices, even if you are buying the good stuff.

If you must buy your coffee, consider using a cash back credit card instead of paying with cash. A good cash back credit card will earn you a few percentage points back on your coffee purchases. Just remember to practice good credit card habits: always pay your bill in full and on time and don’t charge more than you can afford to pay. Many cafes also offer loyalty cards which can get you as much as 10% off in some cases. Happy drinking!