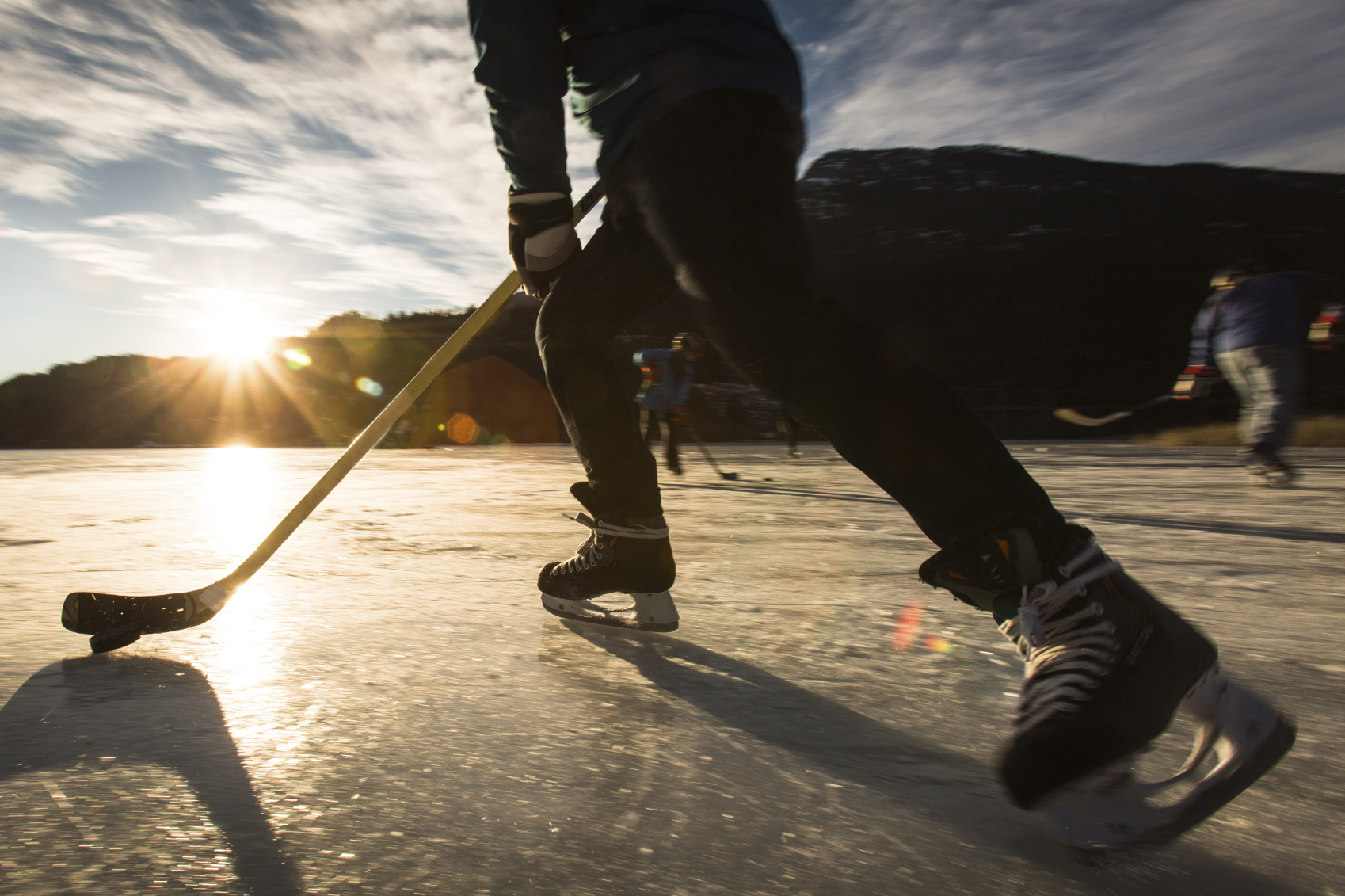 Recent population trends suggest that Americans are tired of the cold. While states like Illinois, Pennsylvania and New York have experienced an outflux of residents in recent years, states like Texas and Arizona have benefitted from substantial interstate immigration. It’s easy to see why: not only do southern and western locales offer cheerier weather, they often combine it with living costs (and taxes) that are lower than states in the north and particularly in the northeast.

This is the second annual version of SmartAsset’s study. Read the 2017 study here.

There’s at least one group of Americans, however, who would be hard-pressed to move south for any reason: hockey fans. Hockey may not have the largest following of major U.S. sports, but its fans are among the most dedicated – and the most intense. In true hockey towns like Grand Forks, North Dakota; Hershey, Pennsylvania; and Houghton, Michigan, cold weather isn’t a reason to flee. It’s a reason to celebrate.

To find America’s best hockey towns, SmartAsset looked at data on fan intensity and quality of life in 123 U.S. cities or towns that are home to NHL, AHL, ECHL or NCAA Division I hockey teams. We considered such metrics as the average attendance at hockey games and the amount of search traffic for the term “hockey” to gauge fan intensity.

We looked at factors like the median income, the unemployment rate and the violent crime rate to reflect each town’s quality of life. (Read more about our methodology below.) 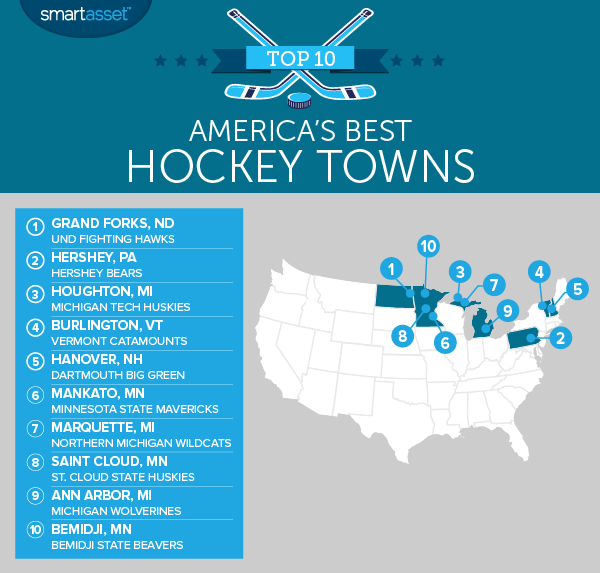 It’s a good time to be a hockey fan in Grand Forks. The recently-renamed Fighting Hawks men’s hockey team have made it to back-to-back Frozen Fours and as of this writing are ranked second in the country in both national college hockey polls. The UND women’s team likewise rates among the best in the country, landing at 8th and 9th in the two current polls.

So far this season, the men’s team has averaged more than 11,000 in home-game attendance, which equals a sell out for every game. The town rated first for hockey fan intensity, scoring a perfect 100.

But the good news doesn’t end there. Grand Forks also rated as the top town for its overall quality of life. It has an unemployment rate of just 1.9% (as of November 2015), the lowest rate of any town in SmartAsset’s study. Likewise, it rates in the top 25 of all U.S. hockey towns for its low housing costs and high concentration of dining and entertainment establishments.

In this central Pennsylvania town, hockey isn’t just a form of entertainment – it’s a tradition that outdates most of the town’s residents. The Hershey Bears have been taking the ice since 1932 and have been playing in the American Hockey League since 1938. During that time they have racked up 11 Calder Cups (awarded to the league’s playoff champion), most recently in 2010.

While hockey in Hershey hasn’t changed much over the past century, everything else has. According to the U.S. Census Bureau the town’s median income is $54,118, roughly 40 times the average U.S. income in the year 1940. The unemployment rate is 3.8%, less than a quarter of the national unemployment rate during the 1930s. Overall, Hershey scored a 98.83 for its quality of life, second highest of any hockey town in the U.S.

Situated on the Keweenaw Peninsula, which juts into Lake Superior off of Michigan’s U.P., Houghton ranks as a top five hockey town for the second year in a row. Attendance at Michigan Tech games has averaged 3,372 so far this season. Compare that to the total population of Houghton itself, which is less than 8,000. Houghton also rates as one of the safest hockey towns in the U.S., with a violent crime rate of just over 100, less than a third of the national average.

After ranking 12th last year, Burlington moves into the top 10 for 2016. There are two major reasons for that shift. The first is that the University of Vermont men’s hockey team has averaged nearly 4,000 fans per game so far this year, good for 95% of stadium capacity.  That helped Burlington rank seventh out of the 120 towns in our study for its hockey fan intensity.

The second reason for Burlington’s high rating is its improved job market. Unemployment in Burlington is just 2.5%, down from 3.6% in 2014. That’s the third lowest unemployment rate of any hockey town in the U.S. and it contributed to an overall quality of life score for Burlington that ranked as the 12th highest in our study.

Hanover is a town of about 8,500 residents (according to the U.S. Census Bureau) and is home to the Ivy League’s Dartmouth College. It rated especially well for its high quality of life, garnering a score of 92.52 for that category. That is the third highest in SmartAsset’s analysis. The town’s median household income is more than $76,000, while unemployment is just 2.8%. It also has some of the lowest crime rates of any U.S. hockey town.

The Minnesota State hockey team has been on a tear in recent years, posting back-to-back victories in the Western Athletic Hockey Conference tournament and winning the 2014-2015 regular season conference championship. They are back at it again this season, with the best record in the WCHA (as of this writing).

In addition to high-quality hockey on the ice, residents of Mankato have enjoyed strong economic conditions in recent years. It has the second lowest unemployment rate of any town in SmartAsset’s study, at just 2.1% as of November, 2015.

Located on the shores of Lake Superior, Marquette is the largest city in Michigan’s Upper Peninsula, with a population of just over 21,000 residents. Hockey is more than a mere sport in this part of the country. Google search traffic for “hockey” in the Marquette area had about 83% the search traffic for “food” over the past three years, the third highest rate in the country.

From November through March of each year, however, Google searches for hockey outnumber those for food. It is no stretch to say that in the winter hockey is more important than eating for the citizenry of Marquette.

Stearns County, Minnesota, in which Saint Cloud is located, is home to more than 160 lakes and numerous ponds. It isn’t unusual on a sunny winter day to see hockey players zooming around one of these natural rinks, trying to put the biscuit in the basket. Indeed, over the weekend of January 29th, Saint Cloud hosted the Granite City Pond Hockey Championship, an outdoor hockey tournament for players of all ages.

The University of Michigan has one of the nation’s most storied hockey programs. The Wolverines have won seven national championships, more than any other team. The team also holds the record for the largest crowd to ever watch a hockey game, with more than 100,000 fans in attendance to watch the Wolverines play Michigan State in December, 2010.

After a slight lull in recent years, Michigan hockey has returned to form this season, standing atop the Big Ten and ranking 6th in the nation (as of this writing). It isn’t just the hockey that makes Ann Arbor a great place for hockey fans; the Ace Deuce also ranks as one of the best college towns to live in.

The third Minnesota town to rank among the top 10 in SmartAsset’s study, Bemidji is home to Bemidji State University, a public university with a student body of about 6,300. Beavers hockey games are a major draw in Bemidji.

The team’s average home attendance so far this season has been more than 3,200. That’s equal to more than half the student body and 75% of the capacity at Sanford Center, where they have been playing since 2010. (The old stadium, John S. Glas Field House, had a smaller capacity, about 2,400.) Bemidji State is also home to one of the nation’s top 10 women’s hockey teams.

As in last year’s study, SmartAsset considered towns with teams in one of four different hockey leagues in order to find America’s best hockey town: the National Hockey League, the American Hockey League, the East Coast Hockey League or NCAA Division I men’s hockey. (We did not consider the newly-created NWHL but hope to do so in future years. Likewise, we did not consider attendance to women’s college hockey games, as that data was not available for many schools.) Our study included 120 towns in total.1

For each of those towns, we calculated two separate scores: a fan intensity score and a quality of life score. We considered the same metrics as last year and one additional metric (attendance as a percentage of capacity), as described below.

SmartAsset calculated two separate scores for each of these two categories. To do so, we ranked every town across each of the factors. We then averaged those rankings (with a separate average for the two categories), giving half weight to the two measures of crime and full weight to all other metrics. Lastly we determined a score from 0 to 100 based on that average. The town with the best average in a category received a perfect 100.

To calculate the index score, we simply averaged the two scores for fan intensity and quality of life. (Grand Forks, North Dakota rated first in both categories and therefore had an average score of 100.)

1. We excluded all Canadian towns that have a team in one of these leagues. Likewise, data was not available for crime rates in three towns: Hamilton, Uniondale and West Point, New York. These locations were also excluded from our analysis. Tempe, Arizona, which is home to the Arizona State Sun Devils’ hockey team, was also excluded. The team currently plays home games in two different stadiums, so attendance and capacity figures are unavailable.