The NBA Teams With the Most Die-Hard Fans 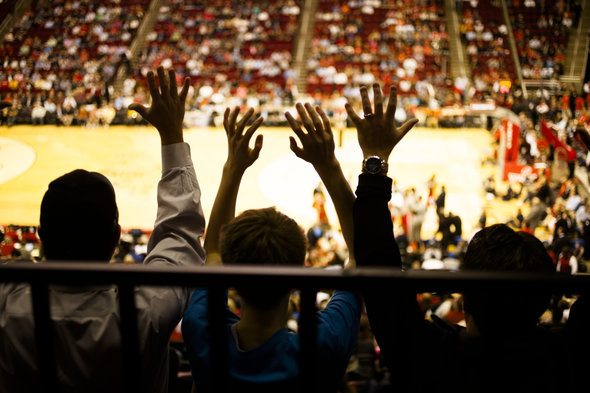 There have been 70 total NBA championships since the league’s inception and 44 of those have been won by the same four teams – the Celtics, the Lakers, the Bulls and Spurs. The Boston Celtics alone have won a mind-boggling 17 championships. This lack of parity is something of a curiosity as the current draft system rewards the worst teams in the league with the highest draft picks. Yet year after year, it’s often the same handful of teams contending for the title.

Despite this, fans of all teams haven’t given up hope, they show up to games season after season to support their team. SmartAsset devised a method for measuring the fan experience with the end goal of determining which NBA teams have the most die-hard fans. Read on to learn what we discovered.

In creating this study, we used a similar approach and assumptions that we did in our ranking of the most die-hard NFL fans. First we assumed that fans are more “die-hard” if they are willing to pay more to see their team in person and also if they are willing to keep showing up even if their team is not likely to win. As such, we looked at attendance rates, win rates and average ticket costs. In our final ranking, we measured ticket prices by hours of work needed to pay for the ticket. This was done in order to control for local cost of living differences. For example, New York has the most expensive tickets but residents also earn the most. Creating this metric allowed us to better compare prices over different areas. Read the full Data and Methodology below for more on where we got our data and how we analyzed it. 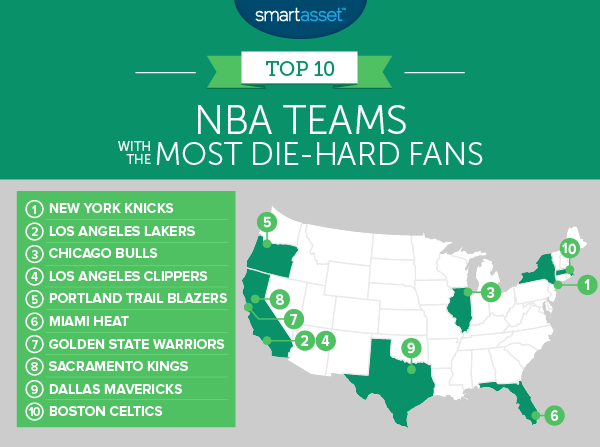 The New York Knicks secured the top spot in our ranking. Despite being in a big market with the ability to attract free agents, the team has been mismanaged for some time, leading to an average win percentage of only 42% since 2005. In fact over the 2005-2016 time period, the Knicks only managed three winning seasons. Regardless New Yorkers flock to see them. The team consistently has some of the highest attendance numbers and according to ESPN data, average attendance over the 2005-2016 time period was 99%. Knicks fans also cough up quite a lot of cash to see them. The average ticket costs $129 – the highest price in the league.

The once-great Lakers are currently enduring a dry spell. They’ve faced three straight losing seasons and particular lows in the past two years, only winning a combined 34 games and seeing the retirement of All-Star Kobe Bryant. Whether it’s the proud history or wanting to show support during the lean years, Lakers fans are still attending. In 2015, despite winning only 20 games, the Lakers had an attendance rate of 98.3%, which is barely less than their average over the 2005-2016 period of 98.9%.

The Chicago Bulls have one of the highest ticket prices in the league ($82 on average). It costs the average Bulls fan about five and a half hours of work to pay to see their team in person. This is the fifth-highest in our study. Despite this, Bulls fans show up at the United Center in impressive numbers. ESPN data shows that the team averaged 101% of maximum capacity over the 2005-2016 time period. This is the second-highest attendance rate out of all teams.

Related Article: The NFL Teams With the Most Die-Hard Fans

For a long time the Clippers were the laughingstock of the league. This year they are off to a blazing hot start. It’s a nice reward to loyal fans who have to work an average of six hours to afford a ticket to a game. Even during one of the team’s worst years in 2009, when they only won 19 games, fans still snapped up close to 85% of the seats.

Named after the Oregon Trail, the Trail Blazers are most famous for two disastrous draft picks. First the team passed up on Michael Jordan in 1984 to select Sam Bowie. Then in 2007, they made a similar mistake drafting Greg Oden over Kevin Durant, who is now a top three player in the league. Despite these missteps, the Trail Blazers have been a pretty good team over the 2005-2016 time period, winning around 50% of their games. Tickets to see the Trail Blazers are relatively cheap at $53 a pop on average. Portland fans need to work about three-and-a-half hours on average to buy a ticket.

All-Stars Lebron James, Chris Bosh and Dwyane Wade led the Heat in the recent past, and probably made even losses seem worth the ticket price. Over the 11-year period we analyzed, the Heat had the third-highest attendance rate in our top 10 at 99.4%. But with the departure of two of the aforementioned superstars and Bosh sidelined due to a medical issue, combined with the sixth-highest ticket prices in the league, it will be interesting to see if attendance rates dip this season.

It should come as no surprise that Dub Nation cracked our top 10. But it would be a mistake to assume that fans’ dedication is all due to the recent success. The recent record-breaking team featuring Steph Curry and Klay Thompson has been a joy to watch, but even in 2006 when the team lost 48 games, attendance was still at 93%. Like many things in the Bay Area, attending a Warriors game can be pretty expensive. Fans need to work slightly more than four hours on average to cover the cost of a ticket.

The Kings have the lowest win percentage in our top 10. In the past 11 years, they’ve only won 38% of their games. Since 2008, the Kings have been stuck in the bottom 10 in the league, standings-wise. Still fans filled over 88% of the stadium during that time period. It probably helps that the Kings are the only professional team in Sacramento.

The Mavericks fans are some of the most loyal in the league. ESPN data shows that they have the highest average attendance rate at 104.6%. They aren’t ranked higher on our list because they have the second-cheapest ticket price in our top 10 ($49.76 on average) and they are one of the more spoiled fan bases. The team has consistently had superstar Dirk Nowitzki leading them to winning season after winning season. Over the 2005-2016 time period, the Mavericks won 62% of their games, placing them behind only the San Antonio Spurs and Oklahoma City Thunder.

The all-time leader in championship wins rounds out our top 10. The Celtics have fluctuated between being one of the best teams during the Big Three era to being one of the worst right after. Despite the roller coaster, Celtics fans continue to attend in large numbers averaging almost a sellout every night. 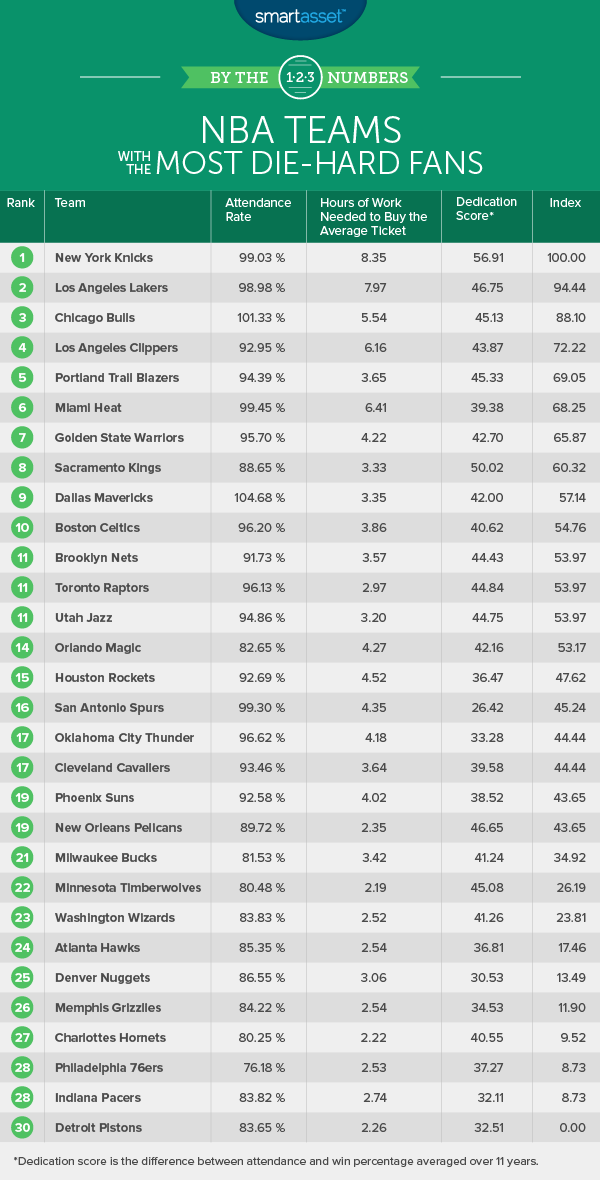 To determine the NBA teams with the most die-hard fans, we gathered data on the following factors: