The Economics of The Formula One Grand Prix of Monaco 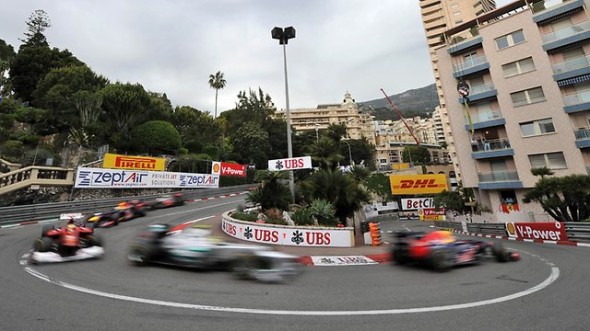 The Formula One Grand Prix of Monaco is one of the world’s most expensive and glamorous events. It is the one race on the Formula One calendar that epitomizes the excessive splendor of the sport. For one weekend in May the world’s most advanced and expensive speed chariots descend on the tax haven by the sea, towing billions of dollars in technical support, advertising revenue and adoring fans. This year 11 Formula One teams will make their way to the sea side municipality of Monaco for the 6th race of the 2013 Formula One season. The Monaco Grand Prix is the second longest running race in Formula One history after the Italian Grand Prix at Monza. The street race in Monaco has been held without interruption since 1955.

Find out now: How does life insurance work? 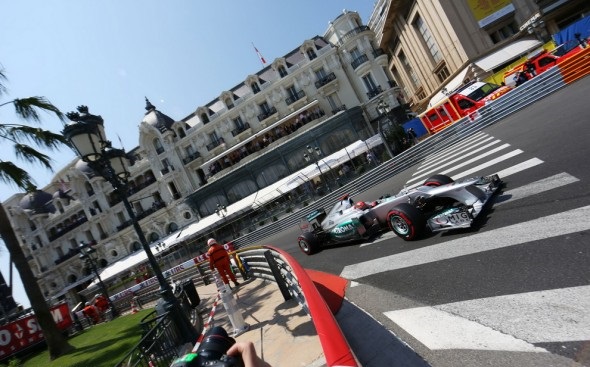 Monaco has been a destination for the super wealthy since the late 19th century. With elegant casinos, lack of capital gains, income and inheritance taxes, and a $400,000 minimum deposit to open a bank account, it is easy to see why. Experts estimate at least one trillion dollars sit untaxed in the tiny nation’s bank accounts.

Which is why many of Formula One drivers, who regularly rank among the highest paid athletes in the world, call Monaco home. Over time the jet set lifestyle of Formula One has become synonymous with the ostentatious sea side principality. It’s easy to see the connection between the two, and the sport of Formula One views this connection as an invaluable justification for its astronomical operating costs, mind bending speeds and exotic destinations. 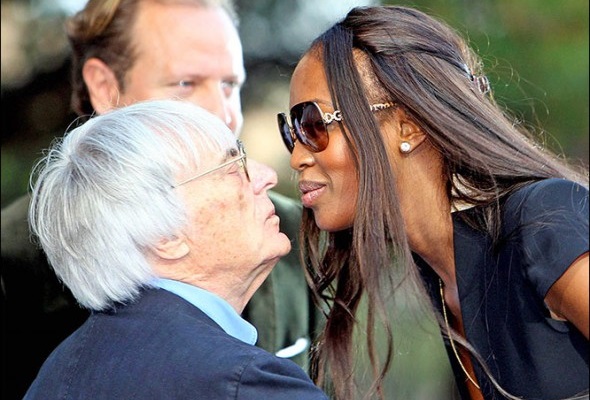 F1 boss Bernie Eclestone and supermodel Naomi Campbell caught in a candid moment of awkward awesomeness. This is the Formula One Grand Prix of Monaco

The Monaco Grand Prix is so important to the sport of Formula One that it is the only race on the calendar that doesn’t pay to host a race. Unlike the rest of the paupers on the Formula One calendar, who pay an estimated $28 million- $31.2 million to jump start their tourism industry, Monaco pays absolutely nothing. Yes, the city is so rich, so cool and so attractive that Formula One’s notoriously shrewd boss- Bernie Eclestone- allows the race promoter Automobile Club de Monaco (ACM) to take 100% of all revenue generated throughout the race weekend.

What really makes the Monaco Grand Prix so fascinating is the sheer amount of people, and money, that descend on the coastal city for just four days of competition. Throughout the year the city’s 30,000 inhabitants include European soccer stars, pro athletes, and millionaire/billionaire playboys. All of them packed into an area about the size of New York City’s Central Park, or roughly 299 acres. New York City by comparison is roughly 154,000 acres in size. This shortage of space helps make Monaco one of the most expensive real estate markets in the world at $5,635 per square foot. 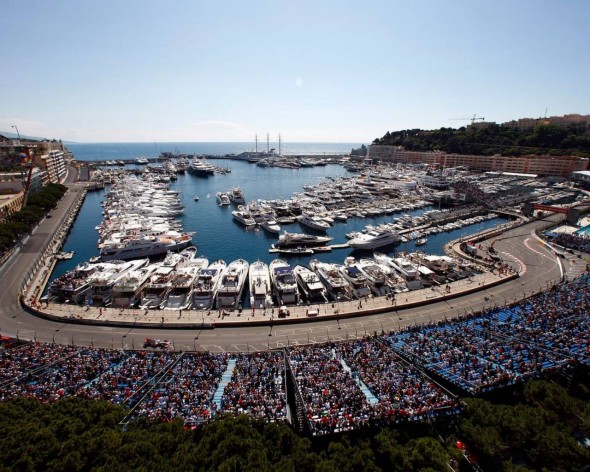 One of only a handful of street circuits on the Formula One calendar, it takes 50 engineers six weeks to turn 2.075 miles of road  into a state of the art race circuit. In the process   1,100 tons of grandstands, 900 tons of pit garages are assembled. The only thing keeping the 750 horsepower race cars from flying into the yachts moored in the harbor, or the pricey real estate, is over  20 miles of temporary safety barrier. 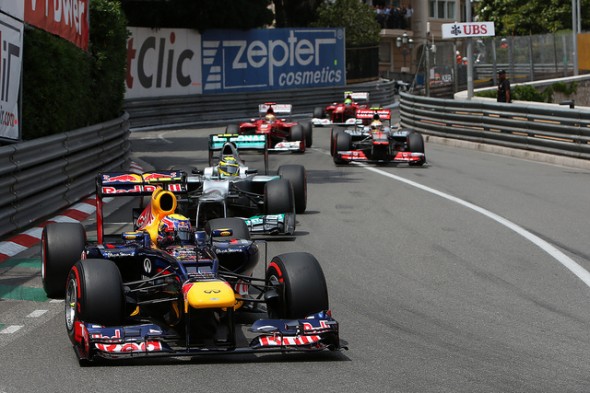 The niceties enjoyed by Monaco’s residents pales in comparison to the amount of money spent, and the miles traveled in pursuit of the Formula One Championship title. Each year DHL, the official air transporter of Formula One, provides logistics support for over 100,000 miles of travel per team. Which is nothing to scoff at especially when you consider the amount of equipment involved in supporting  a race weekend. Not to mention the value of all the cars, and technology.

In 2012 each of the 11 teams spent on average between $5.4 million and $13.5 million to compete in the Monaco Grand Prix. Which is just one part of the roughly $325 million annual budget spent by teams like Red Bull Racing.  Not included in the per-race budget are the actual cost of the cars, or the engines to power them. Each team typically brings three cars, one spare chassis and several spare engines per F1 rules.

With an estimated cost of roughly $2.8 million – $7 million per car, the total value of the cars present for one team on any given race weekend can be as high as $28 million. This figure does not include engines, which are developed and built separately from the cars. Teams currently budget $19.24 million each year solely for the development of more powerful and efficient motors. 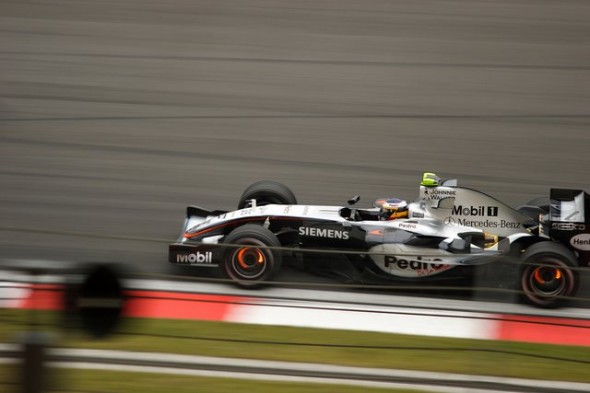 So where does the $7 million price tag come from? With individual components like the steering wheel costing as much as your average premium luxury car at about $30,000- $50,000, it’s easy to see how the bill can quickly grow to seven or eight figures. More high tech parts like the Kinetic Energy Recovery System (KERS), which captures energy during braking and stores it in a battery as a power boost (think Toyota Prius meets Fast and the Furious), can cost anywhere between $6.42 million and $7.7 million. How much for more banal parts like a steering rack and power steering motor?  About $19,000.  Brake pads? Try $5,000.

These aren’t your run of the mill parts either. The $5,000 set of brake pads help the cars decelerate from 185 miles per hour to a standstill in less than four seconds at forces 5.5 times greater than gravity.  That massive energy transfer can generate up  to 1,832 degrees Fahrenheit worth of heat, or just enough to spontaneously combust your marshmallows.

What are all of these parts made of? Only the latest and greatest in carbon fiber construction which helps to reduce weight. Where a run of the mill steering wheel will set you back $30 and weighs roughly four pounds; the typical  F1 steering wheel can perform up to 120 functions and tips the scales at just three pounds. 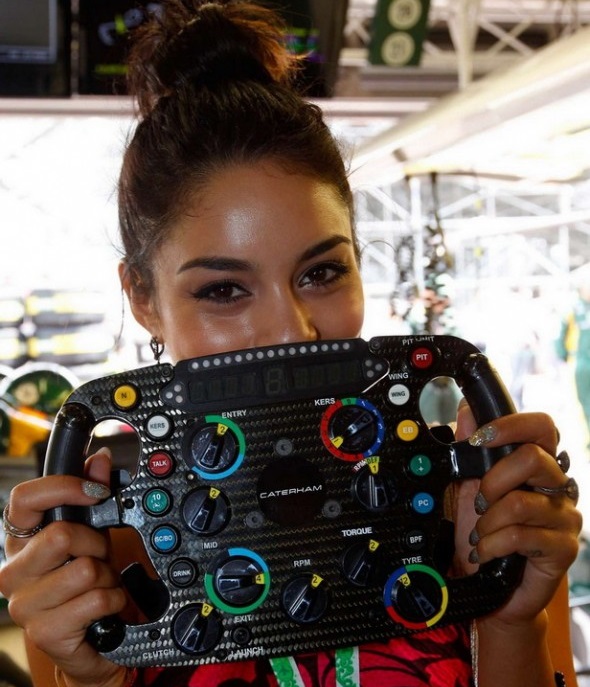 Though the weight minimum for the 2013 season is a scant 1,412 pounds each car manages to pack in three quarters of a mile’s worth of electrical wiring connecting 150 sensors. These sensors are cable of transmitting information 1,000 times per second wirelessly to the engineers in the garage. On any given Sunday each team generates 1.5 billion samples of data to be analyzed by a supercomputer. Lotus Racing claims its supercomputer can execute 38 trillion calculations per second. Per second. Though we couldn’t find an official dollar amount for the monster calculator, Renault claims to have paid $53.09 million for their version in 2008. It’s probably safe to assume that Lotus paid more than that.

If these numbers aren’t enough to make your head spin. The Ferrari Formula One team, which has won 16 Formula One Constructors’ Championships, was valued at $1.1 billion by Forbes in 2012. Making it the 15th most valuable sports team in the world ahead of the Los Angeles Lakers. Chicago Bears and the New York Mets. To put that into perspective, the most successful team in the National Football League, the Pittsburgh Steelers, are worth $1.02 billion or roughly 80 million less than team prancing horse.  Really makes you wonder why anyone would choose to run around a field in tights with other guys. 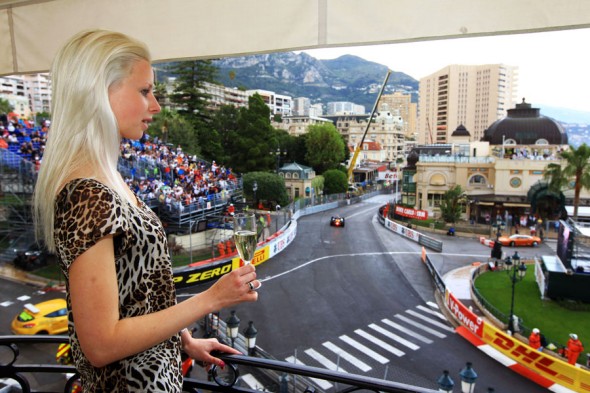 On race weekend nearly 100,000 people will descend on Monaco, though total estimates including spectators, party goers and families puts the final tally closer to 200,000. Which is a ton of eyeballs, enough for race promoter ACM to generate $16.3 million in track side ad revenue in 2008.

Additional income for race organizers comes in the form of ticket sales. Though Monaco has the smallest capacity of any Formula One race track, it still packs in 37,000 official spectators. However, unofficial spectator figures, which include those watching from balconies and various buildings, puts the total number closer to 200,000. Or almost seven times the normal population.

Two day ticket packages for the race (for practice and qualifying on Saturday and the official race on Sunday) range anywhere from 134 euros for bottom of the barrel general admission tickets, to 1,600 euros and 4,877 euros for VIP packages. There are also yacht tickets which allow spectators to watch the racecars tear around the Monaco harbor from the comfort of their million dollar yachts. The cost? A measly 2,700 euros a pop. 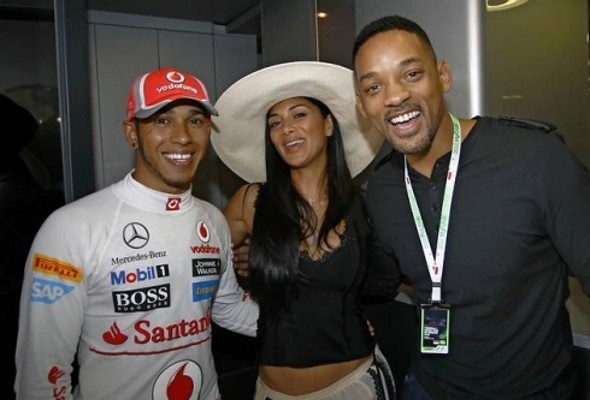 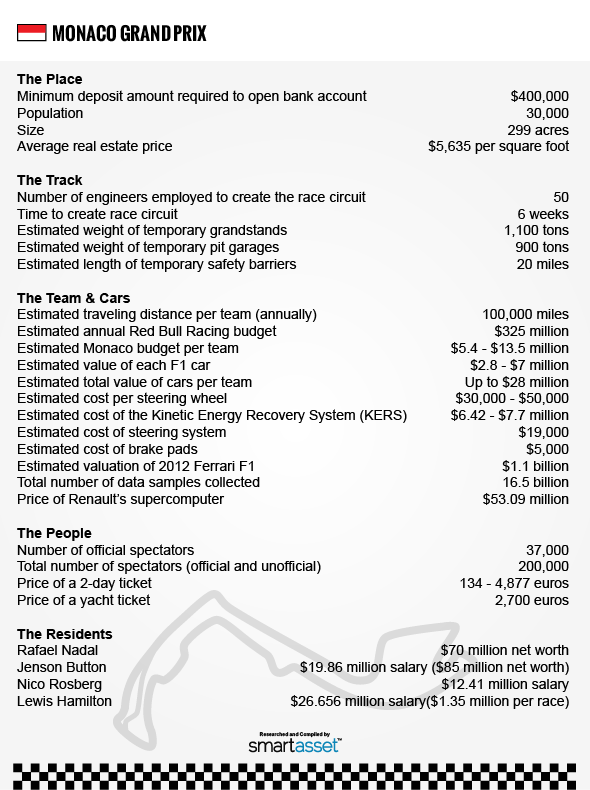 Update: Have financial questions beyond the economics of the Formula One Grand Prix of Monaco? SmartAsset can help. So many people reached out to us looking for tax and long-term financial planning help, we started our own matching service to help you find a financial advisor. The SmartAdvisor matching tool can help you find a person to work with to meet your needs. First you’ll answer a series of questions about your situation and goals. Then the program will narrow down your options from thousands of advisors to up to three fiduciaries who suit your needs. You can then read their profiles to learn more about them, interview them on the phone or in person and choose who to work with in the future. This allows you to find a good fit while the program does much of the hard work for you.