The Economics of Competitive Video Gaming 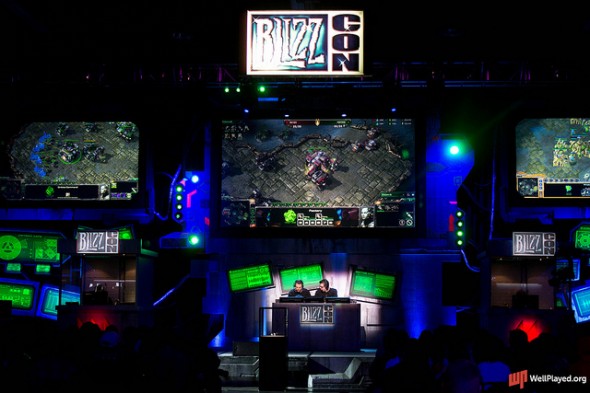 Thousands of fans attending in person, as well as millions more watching at home, strike up a cheer as the teams make their entrances for the playoff match. There’s been a bitter rivalry between the two sides for years that has come to the forefront all season. They line up and take their places, the referees vigilant for cheating in such an important and hotly-contested game, and then the battle begins, the teams battering each other in a beautifully-executed offensive and defensive back and forth for sixty tense minutes.

And when the winners are crowned, they rise from their computers.

Bar the last detail, this scene could have taken place in a packed stadium between major athletic franchises, but moments like this play out at pop culture conventions and other nerd-culture gatherings all the time.

Competitive video gaming, also known as electronic sports or e-sports, has experienced a meteoric rise in the past decade or so. Though e-sports still have a niche audience compared to established professional sports leagues, they’re now a far cry from the days when the only video game tournaments around were Street Fighter matches sponsored by local arcades.

Dozens of leagues and three major governing bodies for video game competitions now exist across the world, with the largest player and fan bases in South Korea.

It’s no wonder that gamers across the world take such an interest in their professional counterparts. The video game industry takes in $10.5 billion a year, according to the ESRB, and as game companies make greater profits, they’re able to afford better production values.

This means that newer games can be significantly more strategically deep and visually interesting than the ones of previous generations. Coupled with the primal human need for competition, this means that it’s simply more fun to watch other people – very skilled people – play video games than it’s ever been before.

The advent of streaming internet video has bolstered the e-sports industry even more, as it meant that it could access worldwide viewership while bypassing the traditional avenue of television coverage. Computer game players are necessarily also regular internet users, and streams have long reach.

Major League Gaming, the largest video game league in the United States, reported 54 million viewer-hours of streaming video watched in 2013, or four times the total number of hours of the NCAA March Madness basketball tournament viewed that year. Those kinds of numbers are enough to give MLG’s investors the confidence to grant it $69 million in venture capital. And one particularly popular streaming e-sports commentator, Husky, boasts close to 900,000 subscribers on his YouTube channel.

The relatively low cost of streaming (viewing it is free as long as you can get online) means big money for everyone involved: the pro players, the leagues, the broadcasters, the sponsors, and, indeed, the video game companies.

Those companies – principally Blizzard, makers of the sci-fi themed real-time strategy game StarCraft, Valve, which makes the multiplayer online battle arena, or MOBA (basically a kind of roleplaying/action game where each player controls and manages the resources of a single character), Defense of the Ancients 2, and Riot, creators of League of Legends, another MOBA – may have been initially indifferent to e-sports but now are officially involved with tournaments whose prizes exceed a certain dollar value, typically $10,000.

Valve’s Defense of the Ancients blog is advertising $499 VIP tickets for the international championship tournament in Seattle in July, which sold out within an hour. General admission tickets for the four-day event cost $99 and also sold out quickly, but the popular VIP seats afforded front-row views, access to the earlier round playoffs, meet and greets, and afterparty access.

The event expects 10,000 or more attendees and there is a total of almost $3 million in prize money for top finishers. That’s about as many spectators as a low-attendance Major League Soccer team like the San Francisco Earthquakes averages per game. When the first e-sports leagues coalesced around 2002, their national championships got 2,000 attendees or so and streaming was unheard of. In-person attendance alone has increased by a factor of five, not even counting the millions glued to their computer screens worldwide.

As another point of comparison to “real” professional sports, consider the fact that Valve now offers an official platform for “Fantasy DotA” leagues, in which you and your friends can “draft” teams of Defense of the Ancients pros and rise in the rankings based on those players’ records.

“I started [watching] streamed StarCraft tournaments when I was in college, about five years ago,” says Geoff Choi, a California graduate student and occasional semi-pro video game player. “I played [the first] StarCraft for years, and then SC II when it came out, which I guess makes me a stereotypical Korean guy. I wasn’t good at first. But it was cool to watch the same way it’s cool to watch the NFL or the NBA. There are guys who train super hard to be able to do stuff you personally could never do.”

One thing the top pros can indeed do that Choi says he only wishes he can is quit their day jobs.

Korean StarCraft pro Jae Dong Lee has made more than $500,000 in tournament purses over a seven year career. When he entered the scene as a 17-year-old back in 2007, Lee racked up winnings of $63,591 for playing in three tournaments. As a 17-year-old.

Known by the screen name Fatal1ty, he is now an entrepreneur and prominent e-sports advocate. Lee and Wendel are only two of hundreds of ranked players of various games who may earn up to a $100,000 a year from their performances. And that’s not counting the, yes, endorsement deals.

Top teams and players get sponsorships from the kinds of companies favored by the e-sports audience, such as top-of-the-line PC makers like Alienware and energy drink maker Red Bull. Recognized names in e-sports, like Lee, German multi-time champ Dario “TLO” Wunsch, and others receive unspecified sums to arrive at tournament finals in logo-bedecked t-shirts and jackets.

Red Bull E-Sports’ website resembles nothing so much as ESPN’s, with splashy headlines about matchups, results, and trade rumors. The big news in StarCraft lately: Free agent and all-time great Jimmy “DeMoN” Ho has been signed to one of the top teams in the world, the internationally-based Team Liquid.

Choi is coy about how much he’s able to make in playing low-ranked, but still paying, rounds of tournaments, but he says it’s nice to have extra money “for tuition and beer.” He describes his playstyle as cautious, aiming to encircle his opponents’ armies, a rarity among players who utilize his favorite faction in the game, the fast but fragile insect-like Zerg.

He says he admires the foul-mouthed Greg “IdrA” Fields, a prominent StarCraft player and American ex-pat in South Korea who is now a broadcaster. IdrA and other e-sports personalities are known for their distinctive playstyles and eccentricities – there’s plenty of room for creative expression in the inherently limited rules of a video game, and e-sports produces figures as colorful as those in traditional sports. Ahn “Rock” Jun Ho, another Team Liquid member, albeit one of lesser standing, is known for a single-minded infantry strategy that he employs in every game regardless of whether it’s prudent.

Getting in on the Action

There is a kind of populist appeal in e-sports that traditional sports don’t have – the barrier of entry for becoming a video game pro is much lower than that for being a professional athlete.

NFL players have to be drafted by a team, and they had to excel as college players before that, and as high school players in order to get into a good college football program. It’s a one-step process to being a great e-sports competitor: Get really good at one video game.

This means years of practice for hours a day (Wendel has said in interviews he often trained for 8-12 hours a day), and the current top StarCraft 2 player in the world, MC, had to win literally thousands of matches to get where he is, having started at zero wins like everyone else.

But anybody with enough time, dedication, and talent could take MC’s spot: StarCraft’s online rankings operate by “ladders,” and when your win percentage on a certain level of play is high enough, you move up to challenge people who have earned the next title up. Get to MC’s lifetime points and you too might be the ranked world champ.

“It seemed like out of nowhere, these tournaments became a big deal,” Choi says. “A few years ago people would say, like, who wants to watch video games? They’re boring unless you’re playing yourself. But now my friends and I will all go over each other’s apartments for the major tournament streams. We’ll get wings and drinks, we’ll trash talk each other, scream at the computer screen. It’s turning into like the Super Bowl for us, and a lot of other people.”

Update: Have financial questions beyond the economics of competitive video gaming? SmartAsset can help. So many people reached out to us looking for tax and long-term financial planning help, we started our own matching service to help you find a financial advisor. The SmartAdvisor matching tool can help you find a person to work with to meet your needs. First you’ll answer a series of questions about your situation and goals. Then the program will narrow down your options from thousands of advisors to up to three registered investment advisors who suit your needs. You can then read their profiles to learn more about them, interview them on the phone or in person and choose who to work with in the future. This allows you to find a good fit while the program does much of the hard work for you.