Where Americans Give the Most to Charity 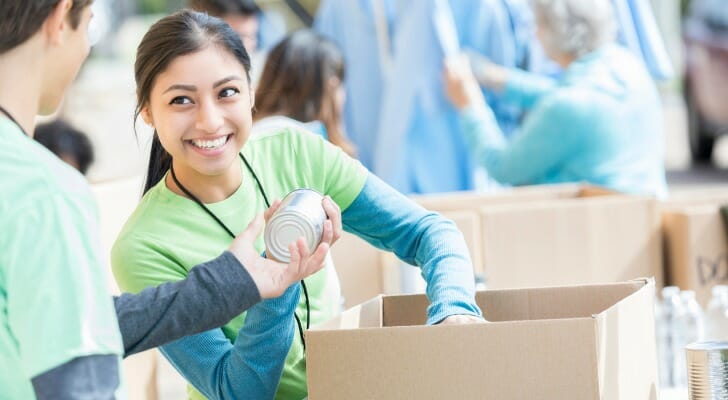 Just 24% of taxpayers reported a charitable gift on their tax returns in 2015, according to a study from “The Chronicle of Philanthropy.” That’s down from a decade earlier when that figure routinely reached 30%. And though fewer people may be giving out of the good of their hearts and working with a financial advisor to use these contributions to reduce their tax liabilities, Americans in certain places are punching above their weight in generosity.

In order to find the most charitable places in America, we looked at data on two factors. We examined the percent of tax returns with any income that had a charitable donation. We also then looked at the total amount donated as charitable contributions and compared it to the total amount of income reported on tax returns. To see where we got our data and for a more detailed description of how we created this study, check out our data and methodology below. 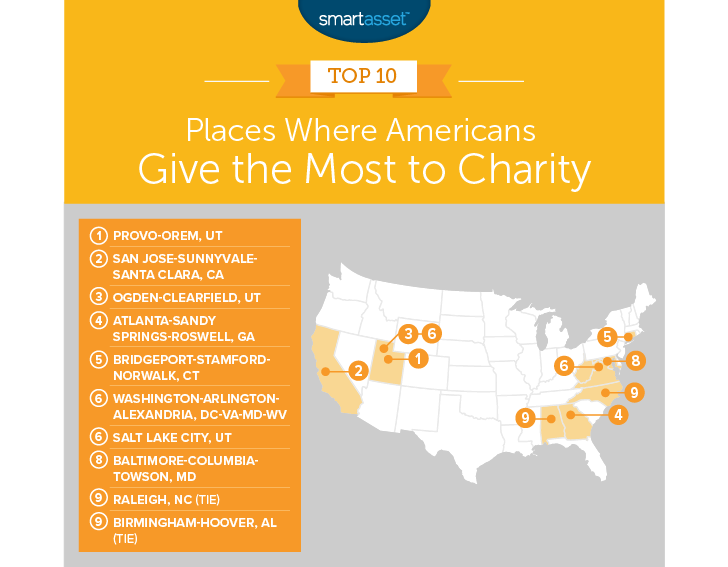 The Provo-Orem, Utah metro area leads the way. This is a great area for people looking for new career opportunities. But Provo is more than that. This metro area embodies the spirit of giving. According to data from the IRS, just under 35% of tax returns with income have charitable contributions. Those charitable donations are more than token gestures as well. Our data shows that Provo-Orem ranks first for percent of income donated to charity.

San Jose-Sunnyvale-Santa Clara, California comes in second with two top-10 scores. According to our data, just over 34% of taxpayers in this buzzing metro area donate to a charitable cause. For that metric, this metro area ranks seventh. In terms of income, however, the San Jose metro area loses a bit of ground. This metro area only donates 3.9% of its income to charity, placing it three spots behind Provo.

Ogden-Clearfield, Utah is the second of three Utah metro areas to crack this top 10. Roughly one-third of tax returns claim contributions to some charity, a top-15 rate. The reason Ogden-Clearfield takes a podium spot is because of the large size of charitable donations. Nearly 5% of income here goes to charities. For that metric, Ogden ranks third.

Our first non-Western metro area is Atlanta-Sandy Springs-Roswell, Georgia. This metro area came in third with charitable contributions equal to 3.5% of total income. In dollar terms that means roughly $6.4 billion in charitable donations given by Atlanta tax payers. Atlanta falls to fourth due to the relatively few generous hearts in the city. Atlanta ranked 17th in percent of tax returns with charitable contributions.

The metro area surrounding the nation’s capital comes in tied for sixth. Nearly two out of every five tax returns here include some kind of charitable giving. That equals to roughly 1.2 million tax payers giving some money to charity. In total, they donated about $6.9 billion between them. That leaves this metro area in 35th for charitable donations as a percent of income.

Utah’s capital took the sixth spot. It is perhaps no surprise that many people here donate to charitable causes. This city is home to many devout followers of the Church of Latter Day Saints. In total, about 156,000 tax returns had contributions to charitable causes in them. That is equal to roughly 30% of tax returns with income, only the 31st highest-rate. Where Salt Lake City shines is in size of donations. Charitable contributions equal about 3.8% of income, the fifth-highest rate.

Baltimore-Columbia-Towson, Maryland comes in just behind the two metros tied for sixth. Like in nearby Washington, D.C., it is common to see charitable contributions on Baltimore residents’ tax returns. This metro area ranked third for percent of residents giving to charitable causes. If the Baltimore area wants to climb the rankings in this study, its residents could try increasing the size of their donations. This area ranks 34th for charitable contributions compared to local income. 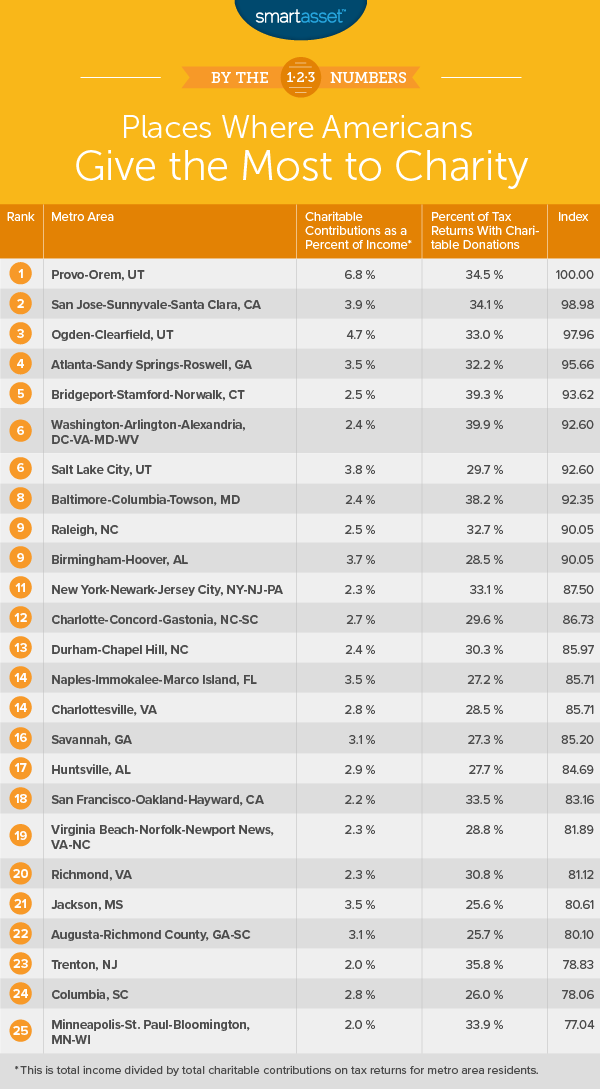 In order to find the most charitable metro areas we looked at the largest 200 metro areas measured by number of tax returns. We then ranked them using the following two metrics:

All data comes from the Internal Revenue Service and is for 2015.