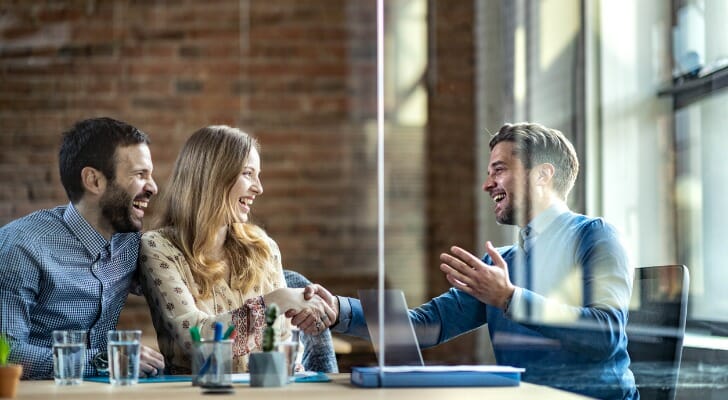 The number of registered investment advisors (RIAs) in the U.S. is growing, as are the number of clients they serve and assets they manage. According to an annual report published jointly by the Investment Advisor Association and National Regulatory Services, there were 13,494 RIAs in 2020 – about 11% more than there were in 2017 (12,172). Last year, those advisors reported a total of 42.1 million clients and $97.2 trillion in regulatory assets under management (AUM) – roughly 18% and 37% more, respectively, than the number of clients and assets reported three years prior.

Though there has been growth across the industry, some advisors have expanded their practices more quickly than others. In this study, we identified the 50 fastest-growing RIAs in the U.S. Eliminating firms that took part in mergers or acquisitions – to isolate organic growth – we compared financial advisors across four metrics: one- and three-year percentage change in number of client accounts and one- and three-year percentage change in AUM. Our Data and Methodology section below has more details on advisory firm selection criteria and how we used the data to assemble our final rankings. 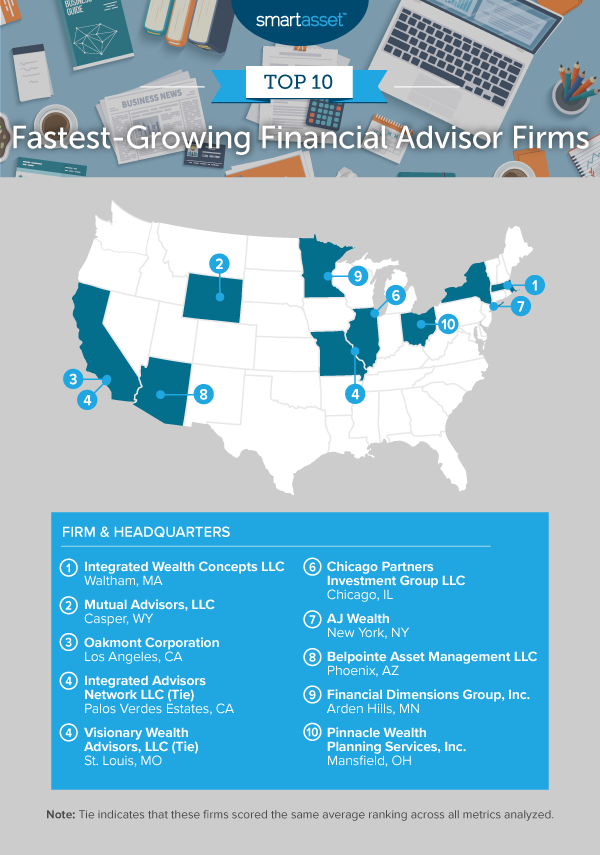 Integrated Wealth Concepts LLC, also known as Integrated Partners, ranks first in our study, growing both its client base and assets managed significantly over the past several years. Integrated Wealth Concepts has the 10th-largest 2017-2020 increase in number of client accounts and greatest increase in AUM of all advisory firms in our study. According to its Form ADV filings with the SEC, the number of client accounts grew from 3,500 to almost 16,400 during that three-year interval, and total AUM increased from $550 million to almost $3.5 billion. In the past year alone, the number of accounts and AUM grew by about 87% and 158%, respectively.

At the end of 2020, Integrated Advisors Network LLC had almost $1.5 billion in AUM, about 160% and 44% more than it did in 2017 and 2019, respectively. Relative to other advisor firms in the study, that is the 24th-highest one-year percentage change in AUM and 10th-highest three-year percentage change in AUM. Integrated Advisors Network has also expanded its client base. From 2017 to 2020, the number of accounts held there more than doubled – growing from just over 3,100 to more than 6,600.

To put together our report, we began by identifying all firms that are registered with the U.S. Securities & Exchange Commission (SEC) and headquartered in the U.S. All SEC-registered firms are legally required to abide by fiduciary duty and must report essential information about their business to the SEC.

To refine our list further, we removed any firms that have disclosures on their Form ADV, as well as firms that do not offer financial planning services or do not serve individual investors. We additionally eliminated firms with less than $500 million in assets under management as of their December 2017 SEC filing. Finally, to isolate organic growth, we eliminated firms who took part in mergers and acquisitions during the time frame by cross referencing Fidelity’s annual M&A reports and through our own research and due diligence.

With that criteria, we compared more than 600 firms across the following four metrics:

Please note, this study does not evaluate the quality of services provided to clients and is not indicative of the financial advisor firms’ future business performance. Neither the RIA firms nor their employees paid a fee to SmartAsset in exchange for inclusion in our rankings.

Tips for Sourcing Clients in the New Year