States Where It Costs the Most (and Least) to Be Rich 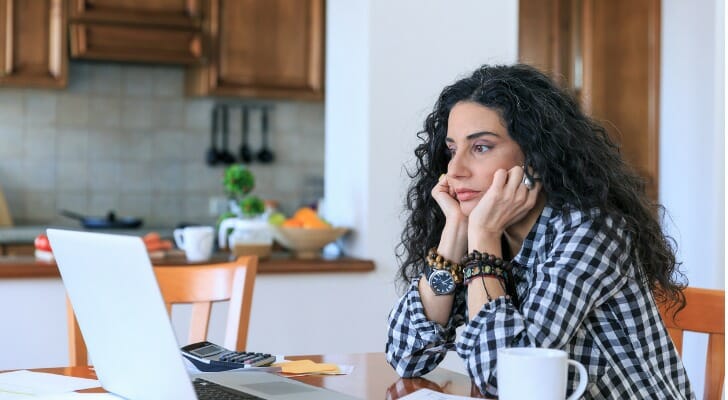 In 2016 the IRS reported that it collected nearly $18.3 billion in estate taxes, from more than 5,200 estates. That is an average tax of $3.5 million per taxable estate. While the estate tax is a punishing one-off payment, the wealthy can also see their annual tax burden pile up due to income and property taxes. The size of the tax burden varies wildly by state however, making it advantageous for the wealthy to live in one state over another. For example, some states have higher income taxes or higher estate taxes. Wealthy Americans without access to expert financial advice, such as from a financial advisor, can find themselves paying sizable portions of their income to the tax collectors.

In order to take a closer look at this subject, SmartAsset modeled income, property and estate tax payments for wealthy households in every American state. We then ranked them from highest to lowest estimated tax burden. Check out our data and methodology section below to see where we got our data and how we put it together. 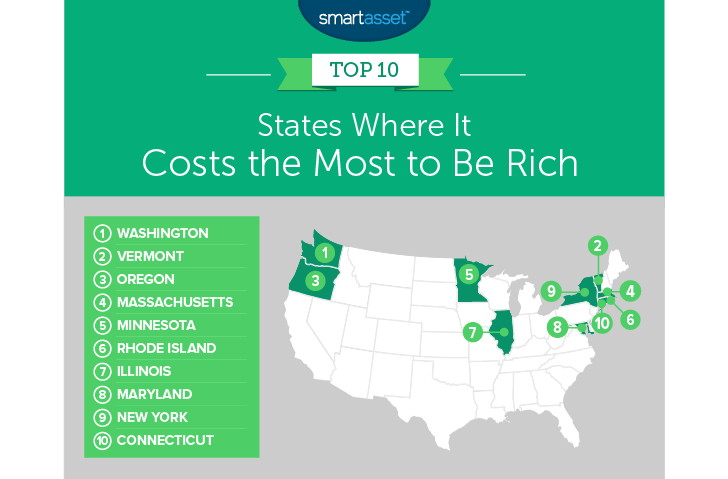 Wealthy residents in Washington face the highest estimated tax burden according to our models. One reason Washington took the top spot is the Washington estate tax. Washington’s estate tax has a top marginal rate of 20% on taxable estates worth more than $9 million. With an exemption of only $2.193 million in 2018, estate tax payers will pay the top marginal rate on estates worth more than $11.193 million. However, wealthy residents do get a break on their state income taxes. Washington is one of seven states with no personal state income tax.

Overall, we estimate that if a Washington household were subject to estate taxes, and had an income of $465,626, a home value of $2.328 million and an estate worth $15 million, the household would pay nearly $3.9 million in taxes.

Vermont takes second. The Granite State comes with high taxes in all three of the metrics we analyzed. Vermont’s property taxes rank among the highest in the nation, and it has the seventh-highest top marginal tax rate in the country. Another problem for extremely wealthy individuals is the flat Vermont estate tax rate. Any estate worth more than $2.75 million is exposed to a tax rate of 16%.

The Beaver State comes in third. This state has one of the most progressive income tax rates in the nation. Income taxes in Oregon top out at 9.9% for incomes above $250,000. Oregon estate tax rates also start at a marginal rate of 10% on any estate worth more than the state’s $1 million exemption. In total, we estimate a $15 million estate would pay around $3.37 million in combined state and federal estate taxes.

Another state known for its progressive tax rates comes in fourth. Income tax rates in Massachusetts are slightly less onerous for the wealthy than in some of the states ranked above. In total, we estimate a household earning $465,626 per year can expect to pay a combined $174,851 in federal and Massachusetts income taxes. Many estates are also exposed to Massachusetts estate tax thanks to an exemption of only $1 million. That means any estate worth more than $1 million has to pay Massachusetts estate taxes. However, the lowest marginal rate starts at 0.8% which softens the blow somewhat.

Another Northeast state ranks in our top 10. Rhode Island combines fairly steep taxes in all three metrics we considered. The top marginal income tax rate is 5.93% and the average effective property tax rate is 1.62%. The Rhode Island estate tax kicks in for estates worth more than $1.537 million, with marginal rates starting at 0.8%.

Homeowners with an expensive home in Illinois will understand the pain of the state’s high property taxes. The average effective property tax rate of 2.24% means that each year the average homeowner pays 2.24% of their home’s value in taxes. When you include the high estate tax rates, it is clear to see why Illinois claimed a top-10 spot. The Illinois estate tax tops out at a marginal rate of 16% for estates worth at least $10.04 million after applying a $4 million exemption.

The estate tax in Maryland is fairly high, which explains in large part why Maryland qualified for a top-10 spot. With a fairly low exemption of $4 million, you may have to pay Maryland’s estate taxes even if you don’t have a super-sized estate. In total, we estimate that a wealthy household paying income, property and estate taxes in 2018, with an estate worth $15 million, would be looking at a total tax burden of $2.9 million.

New Yorkers are used to paying high taxes so they won’t be surprised to find the Empire State crack this top 10. New York estate tax laws are slightly unusual but the main highlight is the top marginal rate of 16%, which starts at taxable estates worth at least $10.04 million. We estimate that in our scenario, a New York taxpayer would be looking at a check to the government worth $2.72 million. Residents of New York City are the hardest hit. In New York City, you have to pay an additional local income tax on top of your state income tax.

The Constitution State rounds out our top 10. Under the new Connecticut estate tax laws, only estates worth more than $2.6 million will be taxed. This is a lower exemption than in a lot of other states, meaning more estates are taxed in Connecticut. But the state isn’t higher thanks to its top marginal tax rate, which is low at only 12%. Connecticut income tax rates top out at a marginal rate of 5.93%.

States Where it Costs the Least to Be Rich

Wyoming is the most favorable state to the wealthy according to our model. This state has neither an estate tax nor an income tax. Effective property tax rates in Wyoming are assessed at 0.61% of home value, one of the lowest in the country. However, the wealthy in Wyoming won’t be spared from the federal estate tax rate. In total, we estimate a tax burden of $1.639 million for very wealthy residents living in Wyoming.

Like Wyoming, Nevada does not have a state income tax. Included in the benefits for the wealthy who choose to live out their lives in Nevada is a lack of state estate tax. The only state-specific tax the wealthy will have to pay in Nevada is property tax. We estimate that a $2.3 million home would cost about $15,000 per year in property taxes.

If you are interested in keeping your income taxes low, Tennessee is a good place to live. There is no state income tax. Property taxes are also low. Data from the Census Bureau shows the average homeowner pays property taxes worth 0.72% of home value. And with no estate tax in Tennessee, the super wealthy do not have to worry about that when they die.

Florida is known as a low-tax state. That’s part of why it’s a great state for retirees. Overall, wealthy Floridians can enjoy paying no extra income tax and no extra Florida estate taxes. You will still have to pay the federal estate tax, though. If you are concerned about the estate taxes, you should reach out to a local financial advisor to help you lower your tax exposure.

Another Southeastern state, Alabama is also a friendly state for the wealthy. Alabama does have a light state income tax which it levies on residents. However, we estimate a household earning $465,600 per year would only need to pay $17,700 in Alabama taxes. Alabama makes up ground on other states because of its extremely low property tax rates. Using Census Bureau data, we estimate that the effective property tax rate in Alabama is only 0.41%.

We estimate a person paying estate taxes on a $15 million estate in Alaska would be looking at a bill of $1.47 million. While that may seem like a lot, Alaska doesn’t tack on any estate tax at the state level. When you include the lack of additional state income tax, it becomes clear why Alaska ranks well as a place to be wealthy. Homeowners in Alaska do feel the pinch somewhat, however. Alaska’s effective state property tax rates are 1.19%.

If you’re looking to settle down in a state with low long-term housing costs, Louisiana may be a good place. This state has some of the lowest effective property tax rates in the country. That means once you’re done paying off your mortgage, your housing costs will drop dramatically. Louisiana does have a state income tax. In our analysis, a household in the 1%, earning $465,626 per year, could expect to pay $18,420 in Louisiana state income taxes.

North Dakota is another good option for wealthy Americans who want to avoid a large tax burden. According to our model, a wealthy North Dakotan paying estate taxes on a $15 million estate would pay a total of $1.66 million across property, income and estate taxes.

Colorado takes the final spot in the states with the lowest tax burden for the wealthy. We estimate that the federal tax burden on a $15 million estate would be $1.47 million. In our model, we also included the combined state and federal income tax of $173,120 and property taxes of just $12,000 to bring Colorado’s total tax burden to $1.658 million.

In order to find the states where it costs the most to be rich, we analyzed data on property taxes, estate taxes and income taxes for 49 states. Specifically, we looked at the following three things:

Note: all tax figures are estimates based on 2018 tax rules. We also did not include Hawaii in this analysis due to lack of information on its 2018 estate tax laws.