Places Where Americans Give the Most to Charity – 2020 Edition 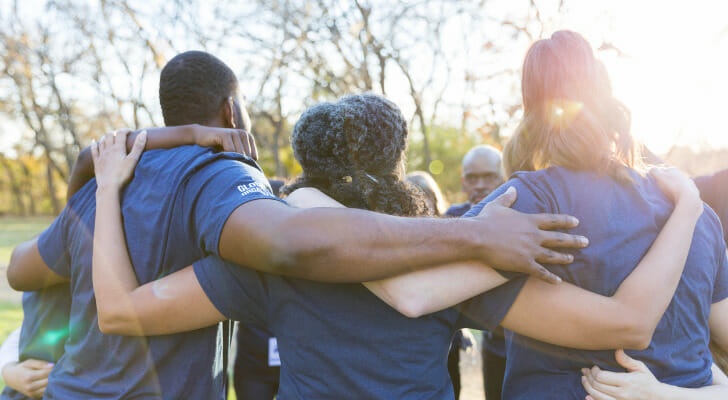 About three in four American adults (73%) said they donated money to a charitable organization in the past year, according to an April 2020 Gallup poll. That’s a new record low, beneath even the charitable giving rate of the Great Recession era. Though the coronavirus pandemic, with its elevated unemployment, may have made Americans less likely to steer their money toward altruistic causes, the generosity they do spread is something financial advisors strongly recommend to reduce their clients’ tax liabilities. Of course, not all places in the U.S. are equally philanthropic, so SmartAsset crunched the numbers to uncover where in the country Americans are most charitable.

To discover the places where Americans give the most to charity, we compared 171 metro areas across the following metrics: charitable contributions as a percentage of income, percentage of tax returns with charitable donations, average charitable contribution, volunteer rate and average hours spent per volunteer. For details on our data sources and how we put all the information together to create our final rankings, check out the Data and Methodology section below.

This is SmartAsset’s second study on the places where Americans give the most to charity. Read the 2019 version here. 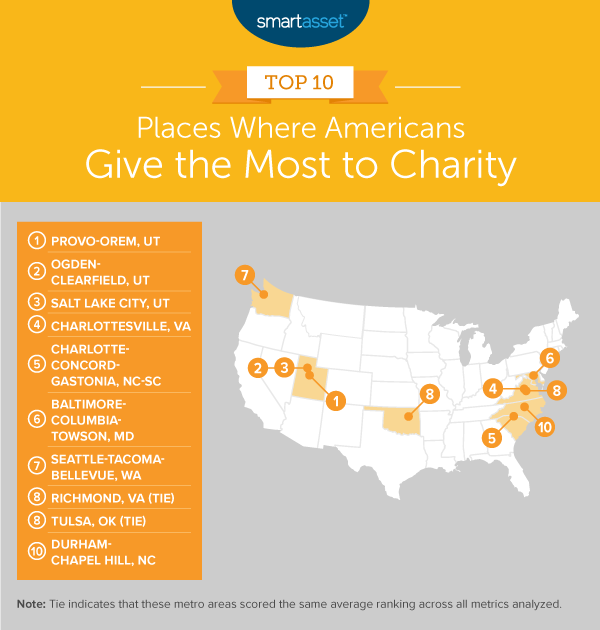 Provo-Orem, Utah leads this list yet again, proving that residents in the home of Brigham Young University have serious charity bona fides. The Provo metro area finishes first in terms of charitable contributions as a percentage of income, with residents donating 6.68% of their income to others. The volunteer rate in Utah is 51.0%, ranking first for that statewide metric as well. The 2017 average charitable contribution for folks in Provo-Orem was $13,346, ranking second-highest in this study.

Charitable contributions make up 4.85% of income for residents of the Ogden-Clearfield, Utah metro area, the second-highest percentage in this study. A charitable donation appears on 33.02% of tax returns in the metro area, the eighth-highest percentage we observed. The metro area also benefits from the fact that Utah takes first in the statewide volunteer rate category, as well as fifth in the average number of hours a volunteer spends helping each year (another state-level metric).

The final Utah metro area on this list is the state capital, Salt Lake City. As with the other two Beehive State metro areas above, Salt Lake City benefits from the fact that Utah ranks well on two state-level metrics — volunteer rate (first place) and average hours spent volunteering (fifth place). In terms of metro area-specific metrics, Salt Lake City sees residents donate 3.94% of their income to charity, the fifth-highest rate in the study. The average charitable contribution for Salt Lake City is $9,307, ranking 16th out of 171.

Charlottesville has the 12th-highest average charitable contribution in this study, at $9,791. In terms of how many residents of the area give to charity, 30.09% of tax returns have a charitable deduction claimed, the 19th-highest rate we saw out of the total 171 metro areas we considered. Virginia residents give their time, too – the average volunteer racked up 103.29 hours, ranking 14th for that state-level metric.

More than 28% of tax returns in the Seattle-Tacoma-Bellevue, Washington metropolitan area include a charitable donation, placing it at 34th out of 171 in the study. The Seattle metro area also places in the top quintile for its 35th-place finish for charitable contributions, at $7,969. The Seattle metro area benefits from the strong volunteer rate in Washington State (35.7%) and the fact that the average volunteer in the state volunteers 96.90 hours of time.

In the Richmond, Virginia metro area, 30.97% of tax returns contained a charitable donation, ranking 16th for this metric overall. Charitable contributions represent 2.55% of income in Richmond, 36th-highest in the study out of 171 metros — a top quartile finish. Richmond also benefits from Virginia’s rank as the state with the 14th-highest average volunteer hours per person, at 103.29 hours.

Tulsa, Oklahoma residents donate 3.59% of their income to charity, the ninth-highest rate in the study. The Tulsa metro area also finishes fifth in terms of average charitable donations, at $10,920. The reason Tulsa appears relatively low in our top 10 despite those two top-10 rankings is that only 22.11% of tax returns in the metro area include a charitable donation. That figure ranks 98th in our study, in the bottom half.

The Durham-Chapel Hill, North Carolina metro area sees 29.95% of tax returns include charitable donations, 21st in this study (a top 15% finish). On the state level, the metro area benefits from the fact that more than a third of North Carolinians (35.1%) volunteer their time.

To find the most charitable places in the U.S., SmartAsset compared the 200 largest metro areas by population across the following metrics (for which 171 metro areas had complete data available):

Tips for Being Charitable