Places Where Americans Give the Most to Charity – 2019 Edition 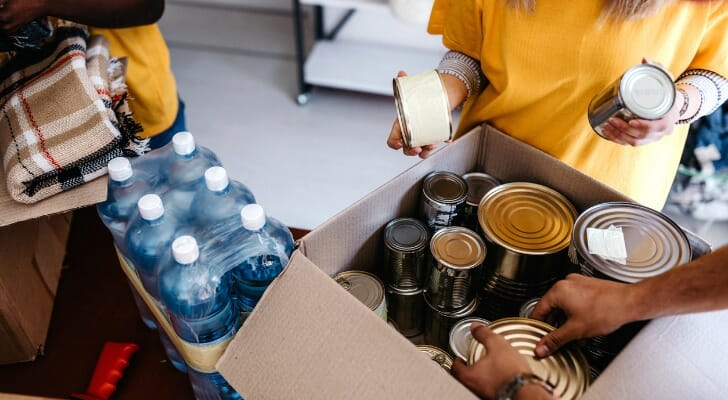 Giving to charity can be doubly rewarding. It helps other people, and it makes you feel like you’re doing something good. As a bonus, it can get you a deduction on your taxes, something a financial advisor can help you navigate. With all that in mind, SmartAsset uncovered the places in the U.S. where people are the most charitable. 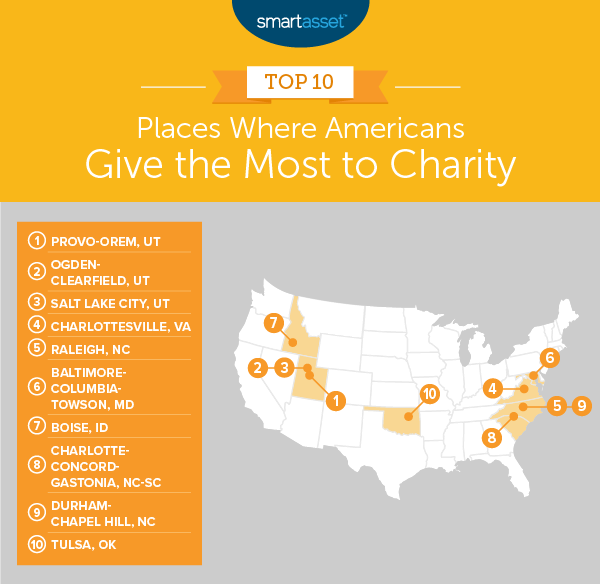 The Ogden-Clearfield, Utah metro area has the fourth-highest rate in the study for charitable contributions as a percentage of income, at 4.71%. It also has a top-10 ranking for average charitable contributions, at $9,219. Since it is also located in Utah, Ogden-Clearfield ties for first with Provo-Orem for state volunteer rate, at 51%, and ties for sixth with Provo-Orem for average number of volunteer hours spent per volunteer, at approximately 116.

Taking the No. 3 spot is the last of the Utah trio, the state capital Salt Lake City. In addition to the top-10 Utah statewide rankings, the Salt Lake City metro area has the fifth-highest rate overall for charitable contributions as a percentage of income, 4.09%. It also has the seventh-highest rate for average charitable contribution, at $9,274.

The Raleigh, North Carolina metro area has the 14th-highest percentage in our study of tax returns listing charitable donations, at 32.73%. Charitable contributions consist of approximately 2.66% of income in the Raleigh metro area, and the average charitable contribution amount is $6,398. On the statewide level, 35.10% of North Carolina’s residents donate their time to volunteering.

Around 38.40% of tax returns in the Baltimore-Columbia-Towson, Maryland metro area list a charitable donation, the third-highest percentage for this metric in the study. While the average charitable contribution amount for this metro area – $4,963 – ranks in the bottom half of the study, the state of Maryland finishes in the top 10 in terms of hours donated per volunteer, at more than 105.

The Boise, Idaho metro area has top-25 rates for both of its statewide metrics. The state volunteer rate for Idaho is 37.90%, and each volunteer in the state donates approximately 98.55 hours on average for the year. The metro area itself stands out for its top-35 ranking for charitable contributions as a percentage of income, at 2.58%.

The Charlotte, North Carolina metro area sees 2.58% of its income given to charity. Furthermore, approximately 29.70% of all its tax returns report charitable donations. The average charitable contribution amount in the Charlotte metro area is $6,166, which ranks in the top half of the study.

The Durham-Chapel Hill metro area, another North Carolina representative in the top 10, has a top-25 rate for its percentage of tax returns reporting charitable donations, at 30.84%. The average charitable donation there is $6,052, which ranks in the top half of the study. The statewide metrics are as follows: North Carolina has a state volunteer rate of 35.10% and an average of more than 94 hours donated per volunteer.

To find the most charitable places in the U.S., SmartAsset compared the top 200 metro areas by population across the following metrics: