Cities With the Strongest Economic Recoveries From COVID-19 – 2021 Study 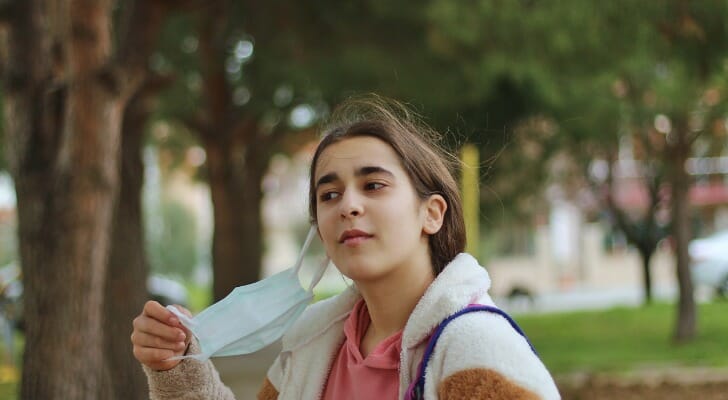 With more than 40% of the U.S. population fully vaccinated (according to New York Times data as of June 15), the economies of many cities have started rebounding at a faster pace. However, the rebound has not occurred at the same rate nationwide. Factors like vaccination rates, public spending, poverty rates, tax revenue and politics have contributed to varying rates of recovery. Keeping this in mind, SmartAsset has identified and ranked the cities with the strongest economic recoveries in 2021 from the COVID-19 pandemic.

Our study considers several economic factors to determine how a city is recovering in the wake of the pandemic. First, we examined changes in overall consumer spending. Then, we took a look at small businesses, specifically how many of them are open and their overall revenue compared to their pre-pandemic numbers. And finally, we took a look at overall job postings and the unemployment rate in cities across the country. For more details on our data sources and how we put all the information together to create our final rankings, check out the Data and Methodology section below.

Since then, there have been different rates of recovery. At the end of April 2021, there were still roughly 33% fewer small businesses open when compared to the average number open in January 2020. Additionally, small business revenue was almost 29% lower than it was in January 2020. The chart below shows all five economic factors and their progression from February 2020 through April 2021. 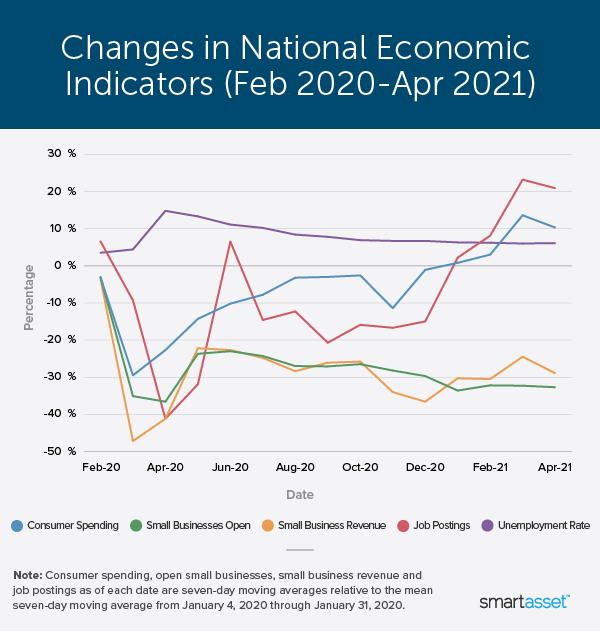 Cities With the Strongest Economic Recoveries

SmartAsset analyzed data for 49 of the largest U.S. cities to identify the local economies with the strongest recoveries. Considering the economic factors referenced above, we compiled a list of the top 10 cities recovering best from the COVID-19 pandemic. 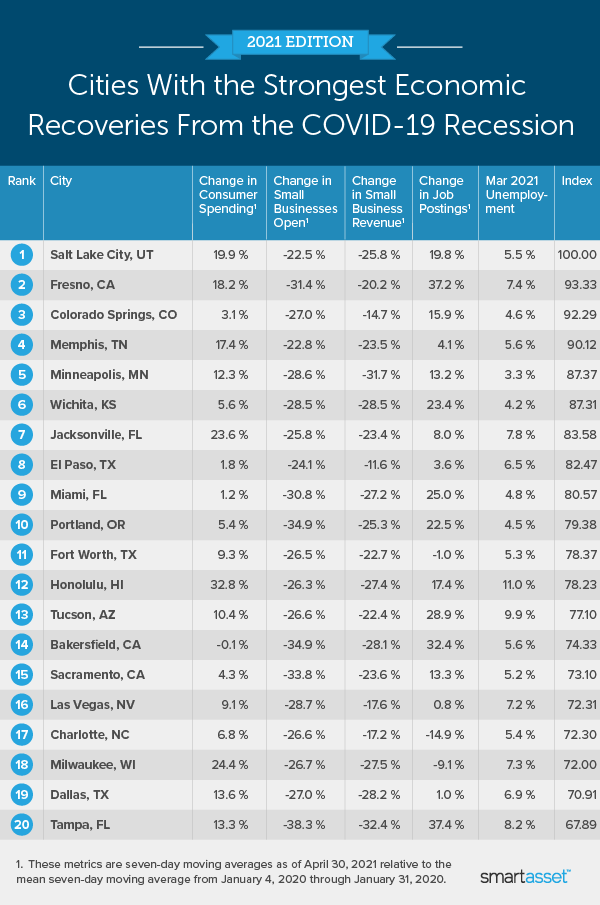 Though nearly every city in our study has seen growth in consumer spending compared to pre-pandemic numbers, consumer spending in Salt Lake City, Utah is up almost 20%. That is the eighth-highest figure for this metric. This city also ranks second for the number of small businesses currently open, with a 22.5% decrease since before the pandemic. It has also seen a significant uptick in new job postings; in the last week of April 2021, there were 19.8% more job postings when compared to the mean seven-day moving average in January 2020.

Fresno, California has excelled in our new job postings metric, which is up 37.2% from pre-pandemic levels and second only to Tampa, Florida. While the city’s small business revenue is down 20.2% from pre-pandemic levels, it ranks sixth for this metric in our study. However, the city falls behind with a 7.4% unemployment rate, ranking 37th in our study.

Colorado Springs, Colorado ranks second in our study when it comes to small business revenue, down by only 14.7% from pre-pandemic numbers. Its unemployment rate is also quite low, at 4.6%. Consumer spending, however, is up only 3.1%, which ranks 35th in our study. The city also ranks 12th overall for both the number of small businesses open and the number of job postings.

Like Salt Lake City, Memphis, Tennessee has one of the lowest decreases in the number of small businesses open. The number of open small businesses in Memphis is only down 22.8% compared to pre-pandemic figures for this metric. Furthermore, this is the third-lowest rate for this metric in the study. Consumer spending in this city has gone up 17.4%. But new job postings are only up 4.1%, which ranks 25th among all the cities in our study.

With an unemployment rate of just 3.3%, Minneapolis soars ahead for this metric above all the other cities in our study. However, it falls near the middle of the pack for small business revenue, which is down 31.7% when compared to pre-pandemic levels.

Wichita, Kansas is the smallest city in the top 10 of our study. It ranks third for unemployment (with a 4.2% rate) and seventh for new job postings (up 23.4% from January 2020). Its rates for small business revenue (with a decline of 28.5%) and consumer spending (with an increase of 5.6%), however, rank 27th and 26th, respectively.

Jacksonville, Florida’s consumer spending is up 23.6% since January 2020, which is sixth-best in our study. And the percentage of small businesses open is only down 25.8%, which is the fifth-best of all cities in the study. However, this city had a relatively high March 2021 unemployment rate of 7.8%.

Small businesses in El Paso, Texas are recovering better than most around the country. The number of small businesses open in the city is only down 24.1% since January 2020, which is fourth-best in our study. Additionally, the city ranks first for small business revenue, with a 11.6% decrease over that time period. El Paso, however, falls to the bottom half of the study for the other three metrics. Specifically, consumer spending has increased only by 1.8% compared to pre-pandemic levels.

Although consumer spending in Miami, Florida has only increased 1.2% since last January and the number of small businesses open is down over 30% in the same time period, the city has seen robust growth in the labor market. Job postings are up 25.0%, which is sixth-best in the study, and the city’s unemployment rate is just 4.8%, ninth-best overall.

Portland, Oregon rounds out the top 10 with the highest gains in the labor market. The city ranks eighth-best for new job postings and sixth-best for relatively low unemployment. However, the city falls behind in small business revenue, which is down 25.3% since the pandemic began. It also ranks lower for consumer spending, which is just 5.4% higher than it was in January 2020.

To find the cities with the strongest economic recoveries from COVID-19, we considered a total of 49 cities. We compared them across five metrics:

Tips for Protecting Your Finances During a Recession