Best Suburbs to Live In Near a Large City – 2022 Study 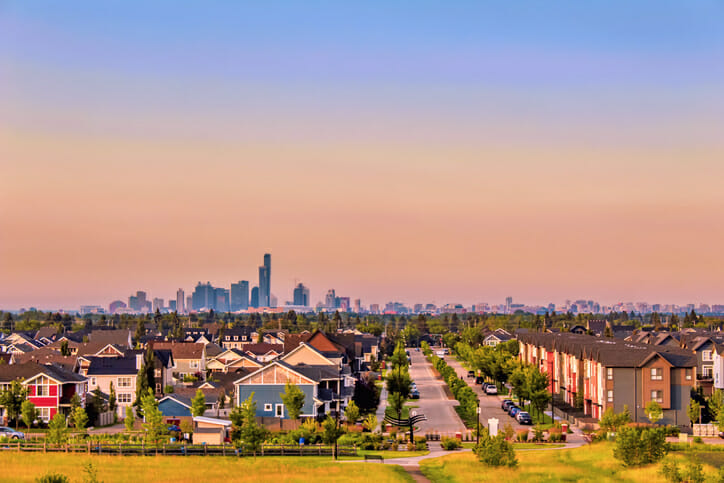 Large cities can be a great option for anyone looking for a walkable, fast-paced environment with easy access to shops and restaurants. However, the hustle and bustle of a large city isn’t a one-size-fits-all proposition for everyone. Large cities are often expensive (average home values exceed $1 million in a handful of places) and may have higher crime rates than their surrounding areas. Suburbs, in turn, can offer more affordable housing, lower crime rates and a variety of entertainment options.

In this study, SmartAsset uncovered the best suburbs to live in near a large city. Specifically, we compared data for close to 500 suburbs located within 15 minutes to an hour by car of a large city (those with a population of 250,000 or more). To determine their ranking, we analyzed 13 metrics across three categories: jobs, affordability and livability. For details on our data sources and how we put all the information together to create our final rankings, check out the Data and Methodology section below.

Across the four major regions in the U.S., the Midwest is home to some of the highest-ranking suburbs in our study. Specifically, we analyzed data for 146 Midwest suburbs and 31 of them rank in the top 50 across all regions – the most of any region.

The top-ranking suburb in the Midwest, and our study overall, is Brownsburg, Indiana. Located roughly 17 miles northwest from Indianapolis, this town is home to almost 26,600 people and scored highest in our jobs and livability categories. Specifically, Brownsburg ranks in the top 100 suburbs across all regions for its five-year income growth (nearly 36%) and 10-year job growth (nearly 29%). It’s worth noting that Brownsburg also offers affordable housing options. We found that median annual housing costs make up just 16.24% of the suburb’s median household income ($89,089).

Brownsburg is not the only suburb outside of Indianapolis that ranks well. In fact, three other suburbs that rank in the top 10 are located nearest to The Railroad City (Noblesville, Fishers and Greenwood). All four suburbs score highest in our jobs category. Specifically, they have unemployment rates of 2.5% or less and 10-year employment growth rates exceeding 25%.

Located east of Indiana, Ohio is home to many livable suburbs as well. Four Columbus-area suburbs ranked in the overall top 20 of our study. They include Delaware, Johnstown, Canal Winchester and Bellefontaine. These four Ohio suburbs performed especially well in our livability category, each ranking among the top 25 for the category. Expect lower violent and property crime rates in these suburbs (under 140 violent crimes and 1,400 property crimes, per 100,000).

For those looking to reside near the largest Midwestern city (Chicago, Illinois), Elmhurst, Illinois may be a good option. This suburb ranks as the 36th-best overall for its high median household income ($123,869) across all regions and places in the top 75 for its low violent and property crime rates (83 and 850 per 100,000 residents, respectively).

Cities in the South offer a warmer climate and are often more affordable compared to other places across the country. For this study, we considered 209 Southern suburbs, and 17 of them rank in the top 50 in our study.

The highest-ranking suburbs near the South’s three largest cities (Houston, San Antonio and Dallas) are:

Outside of Texas, some Southern suburbs also rank well in our jobs category, which considers average incomes, job diversity and three other factors. In particular, Fernandina Beach, Florida (near Jacksonville) ranks second-best in this category overall with a median household income that is nearly 18% higher than the national average and five-year income growth that exceeds 46%.

Fort Mill, South Carolina nearby Charlotte, North Carolina also ranks well for its jobs situation. Fort Mill has the second-highest five-year income growth in our study and fourth-highest 10-year employment growth. Specifically, incomes grew by nearly 65% in the five-year period leading up to 2020 and total employment grew by more than 94% between 2010 and 2020.

A Mixed Picture in the Northeast

Just 30 suburbs in the Northeast, the nation’s smallest region, met the criteria for our list. Overall rankings for those 30 suburbs vary widely. The top-ranking Northeast suburb is Duquesne, Pennsylvania - at No. 29 - while New Brunswick, New Jersey ranks worst overall - at No. 494.

Located within an hour of New York City are six suburbs, and all of them rank in the bottom half of all suburbs in the study. For those who have their mind set on living near the Big Apple, however, the best bet for a nearby suburb is Edgewater, New Jersey, at No. 257. This suburb ranks 30th-best for its median household income (just over $130,000) and is relatively safe with just 66 violent crimes and 1,061 property crimes per 100,000 residents.

Traveling south, you’ll end up in Philadelphia, Pennsylvania - the second-largest city in the Northeast. We considered five Philadelphia suburbs - two of which rank in the top 44% of all suburbs in this study. They are Princeton and Williamstown, both of which are located in New Jersey. Across the three major categories in our study, the former stands out for job-related metrics, with the 18th-highest median household income (at just over $146,000) and the second-highest job growth over 10 years (with more than 1.5 times more employed workers than in 2010).

The top-ranking Northeastern suburb is also closest to Pittsburgh. Duquesne has a population of 5,500 people and has both the No. 1 highest growth in income over five years (78.32%) and the lowest home value-to-income ratio (where houses cost roughly 1.28 times the median income).

Despite the plethora of Western suburbs in our study, most places fall behind relative to suburbs in other regions. In fact, just one Western suburb ranks in the top 50 across all regions (No. 35 Vail, Arizona). However, there are suburbs of note that offer both high and rising incomes.

Incomes are also growing in many Western suburbs. Over a five-year period starting in 2015, the median household income increased in Western suburbs by an average of 23.12%, but this figure varies wildly. It rose the most in Chowchilla, California (64.02%), but fell the most in another California suburb: Taft (-8.54%).

It’s not all about the money, though. Suburbs in Hawaii rank highest in livability. Three of the six Hawaii suburbs considered rank in the top 50 of the livability category, including Kailua (No. 18), Kaneohe (No. 33) and Pearl City (No. 49). In particular, these three suburbs have the 24th-highest concentration of dining and entertainment establishments across these Hawaiian suburbs (nearly 12% of all establishments) and low violent crime rates (under 220 per 100,000 residents).

Hawaii is not the only state offering livable suburbs. Two Washington suburbs (Bainbridge Island and Enumclaw) and two California suburbs (Tiburon and Truckee, which is located closest to Reno, Nevada) rank in the top 10% of suburbs for our livability category. All four suburbs rank in the top 100 for the local high school graduation rate and have low violent crime rates (under 120 crimes per 100,000).

To find the best suburb in your area, we encourage you to enter your city of interest in the table below.

To find the best suburbs to live within an hour of a large city, SmartAsset compared data for places located within 15 minutes to an hour by car to 87 large cities (those with a population of 250,000 or more).

Definitions of suburbs according to population constraints vary, but for the purposes of our study, we considered neighboring suburbs with a population between 5,000 and 100,000. This left us with 494 suburbs, which we compared across three categories and a total of 13 metrics:

We ranked each suburb in every metric and found an average ranking and score for each category. We then found a final score, averaging the three category scores. The suburb with the highest cumulative score ranked at the top of our list.

Considering Moving to a Suburb? Here Are Some Relocation Tips