Best (and Worst) Housing Markets for Growth and Stability – 2022 Edition 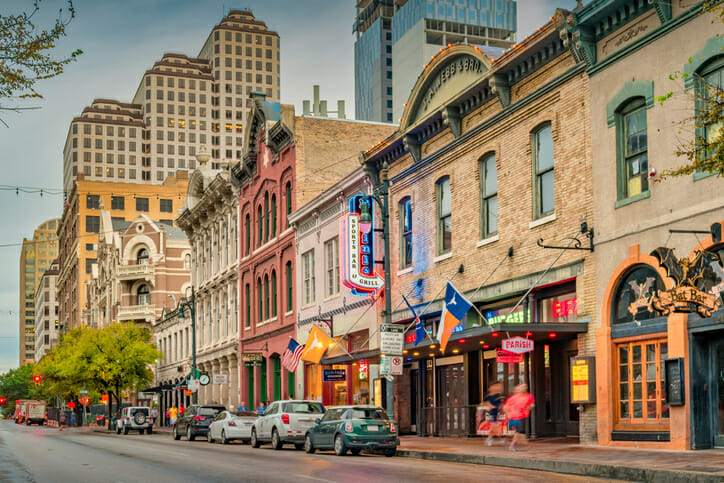 Home prices shot up an average of roughly 17% during 2021 and continued to rise during the first month of this year, according to Freddie Mac data. This spike has led some researchers to hypothesize that the housing market could overheat, especially as the Federal Reserve looks to raise rates. However, most industry experts continue to think this possibility is unlikely. “While it’s impossible to predict what the future holds, much of what caused last year’s significant house price growth will continue into the next,” licensed real estate broker Kris Lippi told SmartAsset.

In this study, SmartAsset investigated the housing markets that are best for growth and stability, comparing home value data in 400 metropolitan areas across the U.S. We looked at statistics from every quarter from the first quarter of 1997 through the fourth quarter of 2021. For details on our data sources and how we put all the information together to create our final rankings, read the Data and Methodology section below.

This is SmartAsset’s eighth look at the best housing markets for growth and stability. Read the 2021 version of our study here.

Moving up from the second spot, Austin-Round Rock-Georgetown, Texas ranks as the best metro area housing market for growth and stability in this year’s study. Home prices increased nearly 368% from 1997 through the end of 2021, the highest increase among all 400 metro areas in our study. Meanwhile, there was a 0% chance that a home would suffer a 5% drop in price within 10 years of being purchased.

According to data from the Federal Housing Administration (FHA), the home price index in Boulder, Colorado rose by more than 277% from 1997 through 2021. Additionally, home prices in Boulder have been relatively stable during that 25-year period, with a 1% chance of a 5% or more drop in home price within a decade of buying.

Part of western Texas, Midland has consistently ranked as one of the best housing markets for growth and stability in the last several editions of our study. This year, we found that Midland ties for first on stability and ranks 38th-best for growth, with a 25-year home price increase of more than 265%.

With home prices rising almost 231% over the past 25 years, Rapid City, South Dakota ranks as the fourth-best housing market for growth and stability. Looking at quarterly home price index data, we found that the average home price in the area never dropped by 5% or more within a 10-year period from 1997 through 2021.

Fort Collins, Colorado claims the fifth spot in our rankings, moving up from sixth last year. The Fort Collins area saw home prices climb nearly 242% between 1997 and 2021, the 61st-highest growth rate in our study. The odds of a 5% price drop in Boulder within 10 years of a home’s purchase were just 2%. 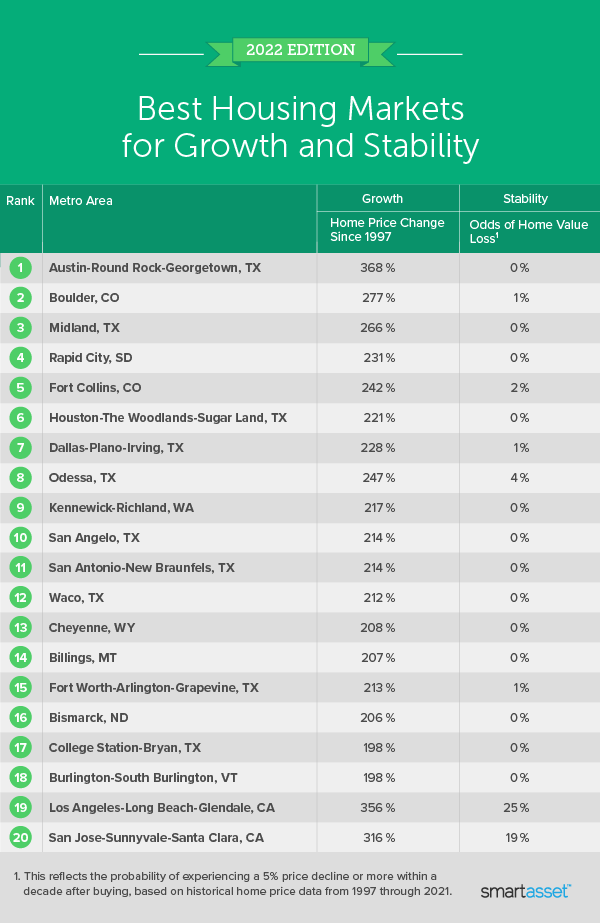 Like last year, the Flint metro area ranks as the worst housing market for growth and stability. Using historical data, we found that the chance a home price dropped more than 5% in value within 10 years of purchase is 45% – the second-worst rate for this metric. Additionally, over the past 25 years, the average home price has increased less than 83% – the 25th-worst in our study.

About 40 miles south of Detroit, the Monroe metro area ranks as the second-worst housing market for growth and stability. There is a 44% chance of a significant price decline for home buyers and from 1997 through 2021, the average home price index increased by only 83.77%, or an annualized rate of return of less than 3%.

Part of the Poconos, East Stroudsburg’s housing market ranks the worst for stability in our study and 62nd-worst for growth. The probability of an East Stroudsburg homeowner experiencing a significant price decline is 46% and the overall home price index increased by less than 103% over the past 25 years.

Over the past 25 years, the average home price in Detroit-Dearborn-Livonia, Michigan rose by only 2.62% annually on average. This is significantly lower than the annualized increase for the top housing market in our study (Austin-Round Rock-Georgetown, Texas, at 6.37%). Additionally, Detroit-Dearborn-Livonia ties with Monroe for the third-worst housing market stability score.

Located in northern Illinois, Rockford ranks as the fifth-worst housing market for growth and stability across all 400 metro areas we considered. If you bought a home in the Rockford metro area between 1997 and 2021, there was a 39% chance the home would have lost at least 5% of its value within 10 years of its purchase. Home prices, meanwhile, rose just 67.25% in that timespan, 398th of the 400 metro areas studied. 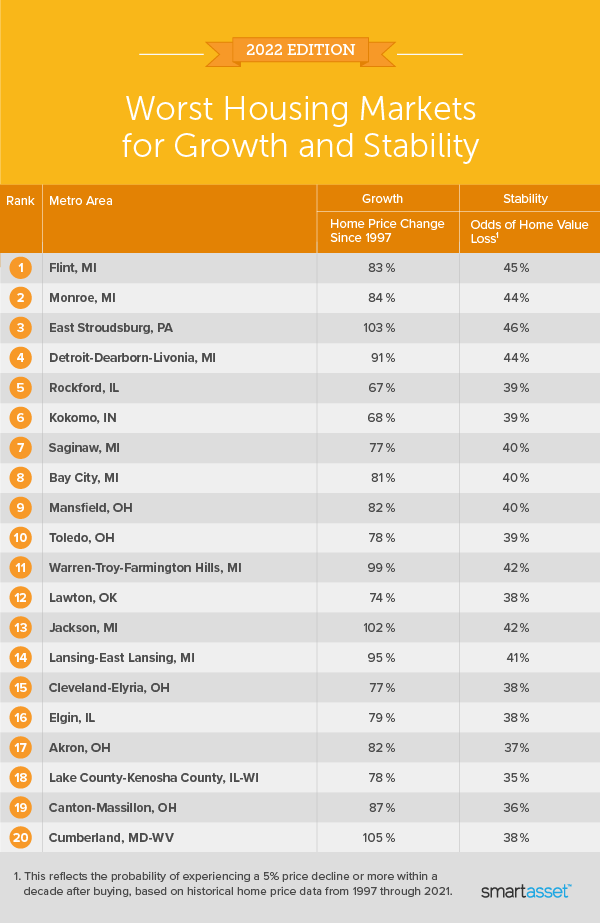 To rank the best and worst housing markets for growth and stability, we looked at data for 400 metro areas and specifically compared them across these two metrics:

All data comes from the Federal Housing Administration (FHA) and covers the 25-year period from the first quarter of 1997 through the fourth quarter of 2021.