Best (and Worst) Housing Markets for Growth and Stability – 2021 Edition 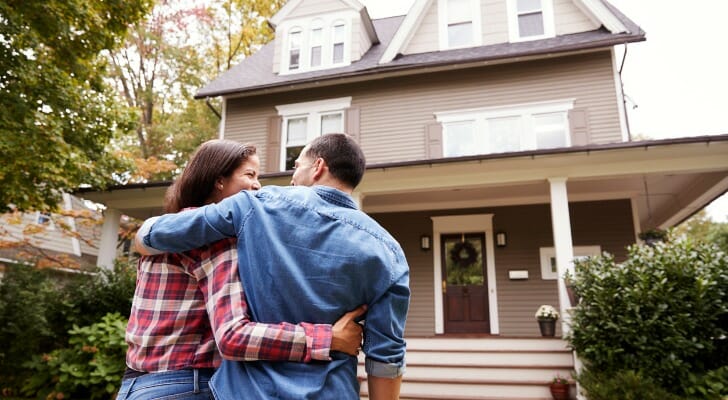 Buying a home is an important financial milestone. Many homebuyers have to save up for years, even decades, to buy a dream home. For them, this is a long-term investment that can also help them build home equity with each mortgage payment. This is why it’s ideal to buy in a housing market where the value of their property can grow steadily over time. To this end, SmartAsset analyzed data from metropolitan areas nationwide to identify and rank the top and bottom markets for growth and stability in 2021.

To find out which housing markets are best for growth and stability, SmartAsset compared home value data in 358 metropolitan areas across the U.S. We looked at statistics from every quarter from Q1 of 1996 through Q4 of 2020. For details on our data sources and how we put all the information together to create our final rankings, check out the Data and Methodology section below.

This is SmartAsset’s seventh look at the best housing markets for growth and stability. Read the 2020 version of our study here.

For the second year in a row, Midland, Texas is the top U.S. metro area for growth and stability in the housing market. Home prices increased nearly 257% from 1996 through the end of 2020 – 10th-best among all 358 metro areas in our study. Meanwhile, there was a 0% chance that a home would suffer a 5% drop in price within 10 years of being purchased.

Greater Austin, Texas is also recognized as one of the top growing and stable housing markets in the country. The Austin-Round Rock-Georgetown metro area saw home prices rise nearly 256% between 1996 and 2020, ranking 11th-highest for growth in our study. The housing market was also consistently stable, with a 0% chance of a 5% drop in home price during the time period of our study.

Boulder, Colorado claims the No. 3 spot in our rankings for the second year in a row. Situated in the foothills of the Rocky Mountains, the Boulder area saw home prices climb 238% between 1996 and 2020, the 17th-highest growth rate in our study. The odds of a 5% price drop in Boulder within 10 years of a home’s purchase were just 1%.

Located in west Texas, Odessa had the 20th-highest home price growth rate (nearly 227%) of all 358 metro areas in our study. Despite a 5% chance that a home would suffer a 5% drop in value between 1996 and 2020, Odessa cracks our top 5 this year after ranking eighth in last year’s study.

Of the top 20 cities in our study, the San Jose metro area had the second-highest probability (19%) that a home would lose 5% of its value within 10 years of being purchased. However, the metro Bay Area experienced a price boom over the last 25 years, as home prices soared 309%, the second-highest growth rate in our study. 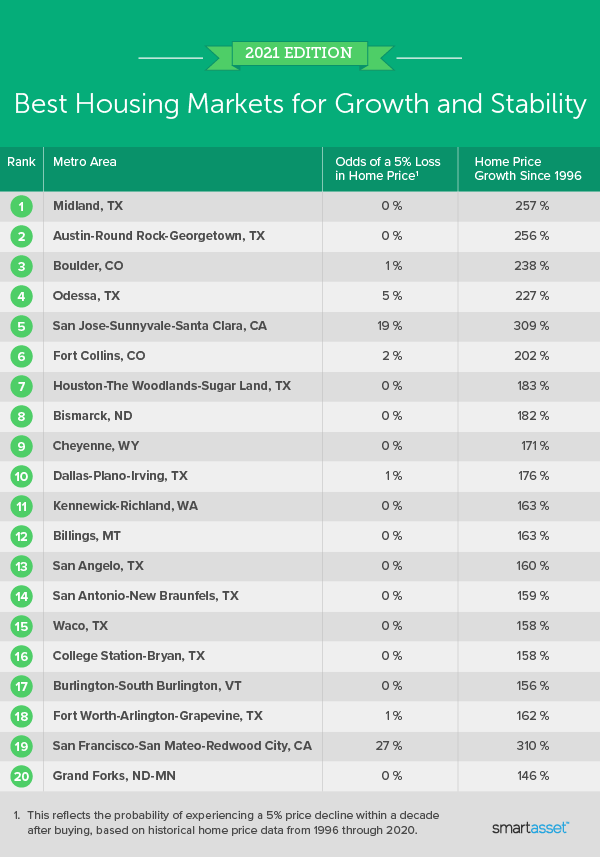 Located between Saginaw and Detroit, the Flint metro area is last in combined stability and growth. The chance that a home price would drop 5% within 10 years of being purchased was 45%, the highest rate for this metric in the study. Meanwhile, home prices rose by just under 71% in the last 25 years – ranking only 329th out of 358.

Home prices in Rockford, Illinois rose at the slowest rate of any metro area in the study – just 42%. Meanwhile, homebuyers ran a 38% chance that their properties would lose at least 5% of their value within 10 years of purchase.

Like the Detroit metro area, there was a 44% probability in Monroe, Michigan that a home would see its price drop 5% within 10 years of being purchased. Price growth also lagged behind most metro areas on our list, increasing only about 81% in the last 25 years.

One hundred miles northwest of Detroit, the Saginaw, Michigan metro area saw home prices rise only 58% in the last 25 years, which is among the lowest growth rates in our study. Saginaw was also particularly unstable during that time period. There was a 40% chance a home would drop at least 5% in value within 10 years after being purchased.

If you bought a home in the Detroit metro area between 1996 and 2020, there was a 44% chance the home would have lost at least 5% of its value within 10 years of its purchase. That’s tied for the second-lowest stability score on our list. Home prices, meanwhile, rose just 84% in that timespan, 302nd out of the 358 metro areas studied. 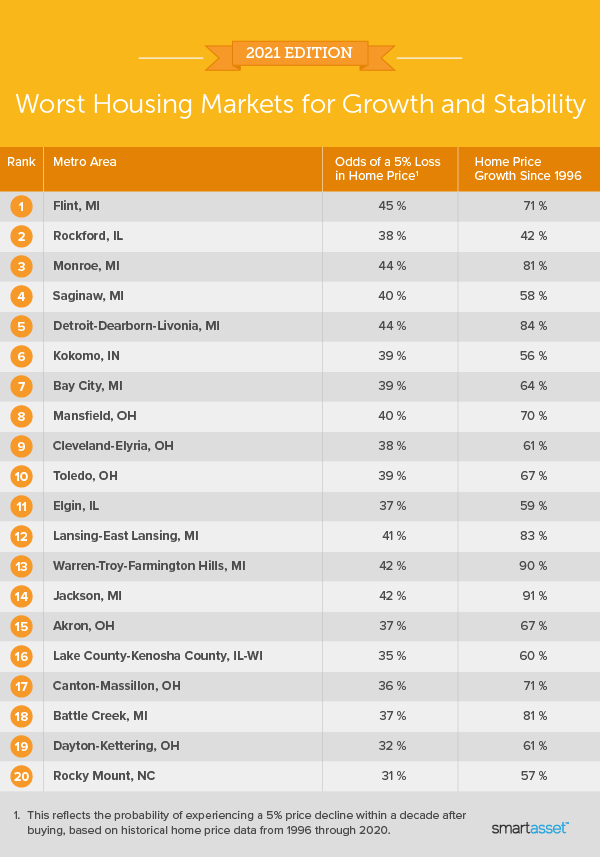 To compile our rankings of the best and worst housing markets for growth and stability, we looked at data for 358 metro areas and specifically compared them across these two metrics:

All data comes from the Federal Housing Administration (FHA). It covers the 25-year period from the first quarter of 1996 through the fourth quarter of 2020.