Where Your Airline Reward Miles Go the Furthest 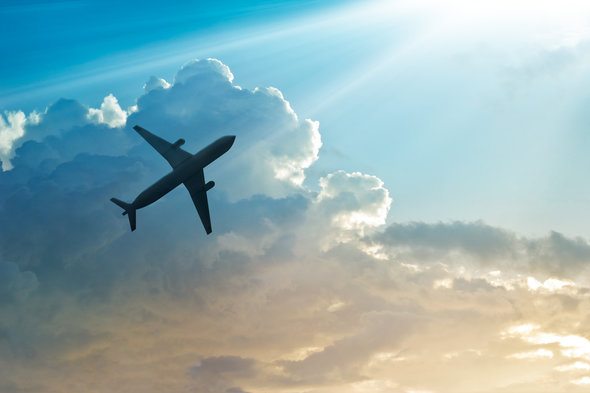 Calling all those bargain hunters with wanderlust! There is a lot of ground to be covered, literally, by judiciously using airline reward miles. For many people racking up reward miles has become a hobby. But it’s not only about collecting the miles (often by choosing the best airline-specific credit cards), it’s also in how you redeem them. It turns out where you live may affect whether you get the best deals. We looked at data from major airline reward programs and domestic flight data to see where your airline reward miles go the furthest.

Flying a route uses different airline reward miles depending on the airline. Let’s take a flight from Boston to San Francisco for example. Boston is separated from San Francisco by 2,704 miles. This same trip that uses 12,500 Delta reward miles requires 40,000 Southwest reward miles.

We found this ratio for all six reward programs and averaged them. The average for the Boston to San Francisco route is 17.35 miles per 100 reward miles, after looking at data on United, American, Virgin America and JetBlue, in addition to Delta and Southwest.

Then we wanted to look at all the flights that leave Boston (not just the one going to San Francisco). So we found the distance-to-100-reward-miles ratio for every flight from each city and then averaged them to create a single statistic for each city.

For example, as we just mentioned the ratio for Boston to San Francisco is 17.35. We found this ratio for all routes departing from Boston to get an overall ratio of 8.59. On average you can travel 8.59 miles from Boston using 100 airline reward miles (across all destinations and airline rewards programs in our study).

We then ranked each city by the highest distance-to-100-reward-miles ratio.

Note: We focused only on the 1,000 most popular flights in the country, measured by passengers per day. We also filtered out any city that had less than 10 flights within the most popular 1,000 flights. 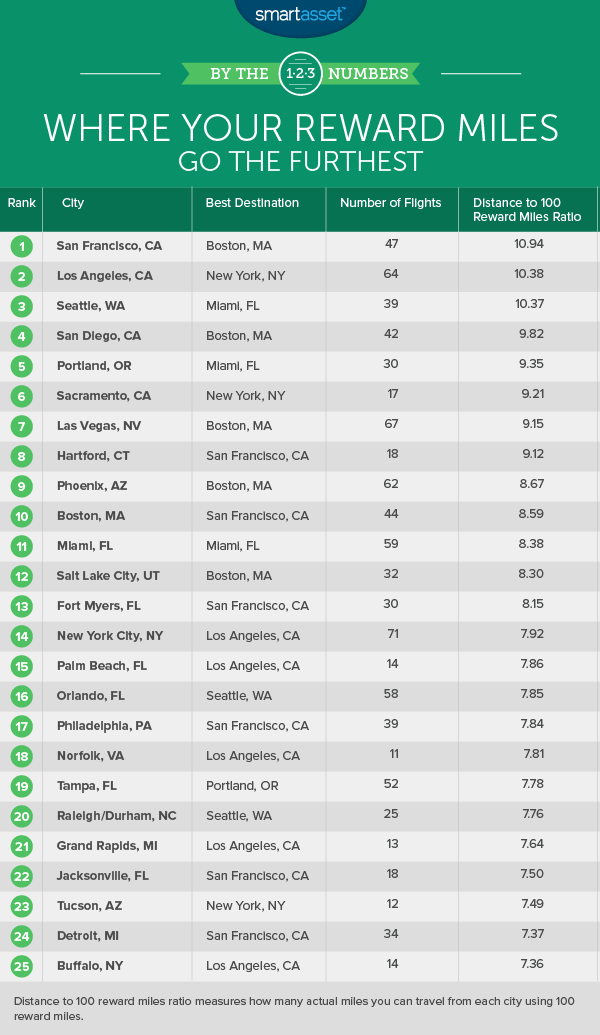 With an average of 10.94 actual miles per 100 reward miles, San Francisco comes in first for cities where your airline reward miles go the furthest. San Franciscans might want to consider heading to D.C. for a long weekend getaway. On average, that route yields an impressive 16.1 actual miles per 100 reward miles. Flying to Tampa, Florida to get some sunshine is also a good option. Being savvy about which reward credit card you have in your wallet can help cover the cost of the vacation once you get there (as long as you use your credit cards responsibly!).

Given the weather in San Diego, it’s hard to imagine why people would want to get away (especially for those of us in the Northeast!). But if you do want to travel elsewhere, San Diego has some of the best options in the country with an average distance-to-100-reward-miles ratio of 9.82. New York and Boston are both great value for distance from San Diego. Detroit is a decent option, too, with an average distance of 13.19 actual miles per 100 reward miles.

Travel lovers based in Portland will find it’s one of the best places to depart from using airline rewards miles. The 30 most popular flights from Portland have an average distance of 8.93 actual miles per 100 reward miles. The Portland to Washington, D.C flight has some of the best value in the country. With cherry blossom season coming up in late March, now may be a good time to book a flight. The Portland to Tampa flight also has great value.

Las Vegas has more routes in the top 1,000 most popular national routes than any other city except for New York. This enables Las Vegas residents to travel widely and for good value. The average flight out of Vegas has a value of about 9.15 actual miles per 100 reward miles.

Hartford has the second-fewest options in the top 10 when it comes to escaping the city. This city has 17 routes in the top 1,000. Fortunately for Hartford residents, these flights offer good value for distance with an average flight going 9.11 actual miles per 100 reward miles. If you are looking to leave Hartford, especially during the dreary winters, you may want to consider San Francisco. This trip offers the best value at 16.45 actual miles per 100 reward miles on average.

Summers in Phoenix can get hot. So why not hop on a flight and go somewhere a little cooler? There are plenty of options. Sixty-two of the most popular 1,000 flights in the country depart from Phoenix. In terms of value it’s hard to beat flights to Boston, with an average of 15.02 actual miles per 100 reward miles.

Beantown rounds out our top 10 cities where your airline rewards miles go the furthest. Flying from Boston to California is a great way to stretch your miles. Flying from Boston to Los Angeles or to San Francisco are two of the best routes for value. But if you are in Boston and want to try something different, Salt Lake City offers great skiing options and value. Flying there yields a value of 13.99 actual miles per 100 reward miles on average.

The data for distance between cities and the 1,000 most popular flights come from the Federal Department of Transportation. Data on the six rewards programs come from each airline’s website.