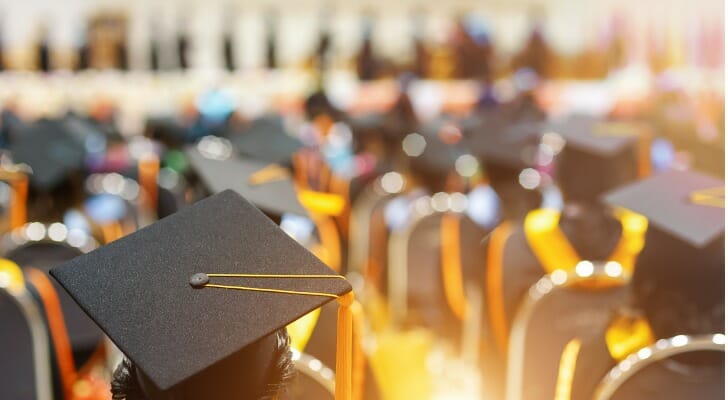 Because getting a higher education is important in many professional fields, it can drastically change a worker’s earning potential and therefore his or her ability to save. According to 2017 statistics from the Bureau of Labor Statistics (BLS), the median weekly salary for someone with a bachelor’s degree was $1,173, while it was only $800 for a person with just a high school diploma. Going to college isn’t cheap, of course. There are some states, though, where it is more affordable than others and offers a greater ROI.

To find the best states for students seeking higher education, SmartAsset analyzed data from all 50 states across the following five metrics: undergraduate graduation rate, average net price, student-faculty ratio, 20-year return on investment and in-state attendance rate. For details on our data sources and how we put all the information together to create our final rankings, check out the Data and Methodology section below.

This is SmartAsset’s sixth annual study on the best states for higher education. Check out the 2019 version here. 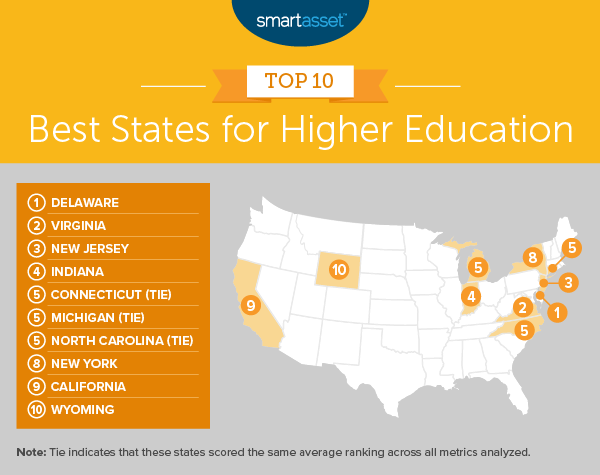 Delaware ranks third overall in three of the metrics we considered: student-to-faculty ratio, at almost 14 students per faculty member; 20-year return on investment, at $433,667 and in-state attendance rate, at 52%. Delaware also finishes in the top 15 of the study for the average net price across all of its four-year public colleges and universities, at $12,807. For recent graduates in the state looking for help managing any outstanding student debt, it might be time to speak to a professional financial advisor.

Although it has the fifth-lowest average net price nationwide, at $18,166, Virginia ranks first overall for the metric of undergraduate graduation rate, at 72%. The Old Dominion’s four-year public colleges and universities also finish in the top 10 of the study for a low student-to-faculty ratio – at roughly 15 students per faculty member – as well as for a high 20-year return on investment, at $388,913. It’s important for prospective and current students to be mindful of the lifetime costs of student loans as they consider their long-term financial plans.

New Jersey finishes second for the metric of undergraduate graduation rate in its four-year public colleges and universities, at 69%. It also finishes seventh-best for its 20-year return on investment, at $409,195, and 13th-best for student-to-faculty ratio, at almost 16 students per faculty member.

Tying for fifth place in our rankings with Michigan and North Carolina, Connecticut comes in fourth for the metric of undergraduate graduation rate, at 66%. The state also finishes seventh-best for student-to-faculty ratio at approximately 15 to 1. Furthermore, the state ranks within the top 15 for its relatively high 20-year return on investment, at $367,803.

Graduates who are looking to cut down on residual costs of an investment in their degree might consider an education refinance loan that best meets their needs.

Michigan ties for fifth-best state for higher education along with Connecticut and North Carolina. Michigan doesn’t rank in the top 10 for any particular metric, but it finishes within the top 15 of the study for the metrics of in-state attendance, at 38%, and student-to-faculty ratio, at approximately 16 students per instructor. Furthermore, the state ranks within the top half of the study for the remaining metrics.

North Carolina ties for fifth place, along with Connecticut and Michigan. It comes in seventh for its relatively high undergraduate graduation rate, which is 65%. Graduates who are looking for opportunities after receiving their degree might wish to stay in the state, as two North Carolina cities are ideal for young professionals. Even though the state ranks within the bottom half of the study for 20-year return on investment, at $257,462, it ranks 14th-best for its relatively low average net price, at $12,910.

New York ranks in the top half of the study for four out of five metrics, all except in-state attendance. The average net price of the four-year public colleges and universities in the state of New York is the third-lowest in the study, at $10,167. Despite the relative affordability, it might still be wise to look into New York’s 529 College Savings Program if you’re a guardian planning to start saving for a child’s future education. The state also ranks 18th-best for two metrics – a low student-faculty ratio, at approximately 16 students per instructors, and a high 20-year return on investment, at $344,490.

California performs the best in the metric of 20-year return on investment on a four-year public college or university education, at $461,667. While the state unfortunately finishes last in the study for its high student-to-faculty ratio, it cracks the top 20 for the other metrics, including 19th-best undergraduate graduation rate, at 57%, and ninth-lowest average net price, at $11,032.

Wyoming ranks fifth-best for student-faculty ratio, at about 15 students per instructor. The state also comes in 15th overall for both its relatively low average net price, at $12,999, and its relatively high 20-year return on investment, at $360,000.

For those looking to get the most bang for their buck in the work force after graduating from college, take a look at SmartAsset’s roundup of the most in-demand jobs for bachelor’s degree holders.

To find the top states for higher education, SmartAsset analyzed data in all 50 states for the following metrics:

Data for metrics was found using a weighted average of the schools in each state.

Tips for Managing Your Money to Pay for Higher Ed