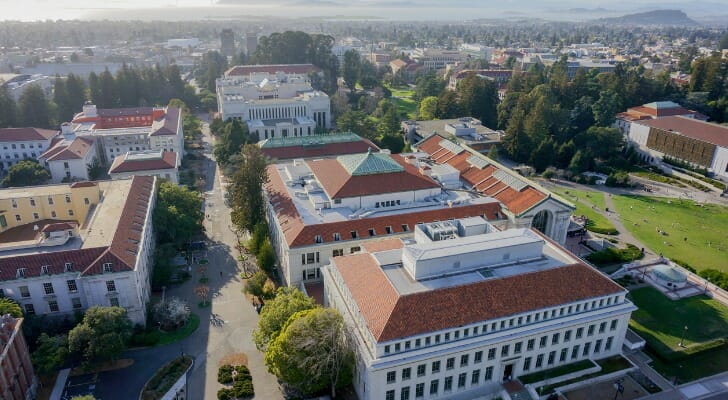 A college degree is pricey and getting increasingly expensive: From 2006 to 2016, the cost of college tuition and fees increased by 63%, according to the Bureau of Labor Statistics. That may leave would-be undergraduates with sticker shock that deters them from matriculating. But forgoing a college education can limit your earning potential. From 1979 to 2017, real incomes for men with just a high school degree dropped by 18% while incomes for women in the same group rose, but only by 5%. Your best bet is to find a college education that won’t break your savings account. Public schools typically offer some of the most bang for your buck. Below, we rank the best states for higher education.

To rank the best states for higher education, we looked at five metrics. We compared the state higher-education systems by their student-faculty ratios, average net price, graduation rate, in-state attendance rate and the 20-year return on investment. The Data and Methodology below includes our data sources and how we put all the metrics together to create a final ranking.

This is SmartAsset’s fifth annual study on the best states for a higher education. Read the 2018 study here. 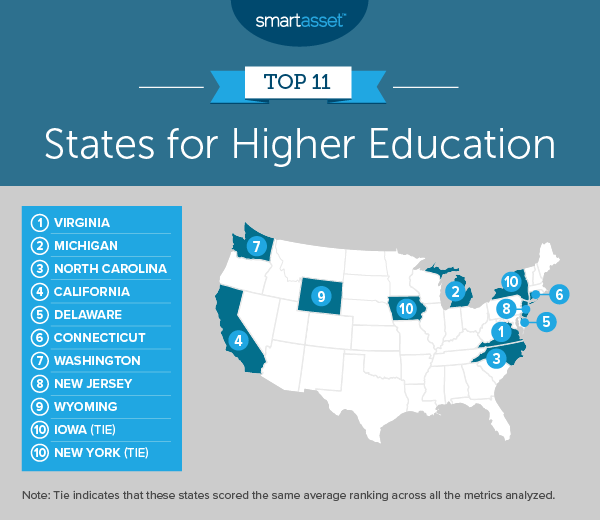 Once again, Virginia comes out as the top state for higher education. The average college in this state has a student-to-faculty ratio of fewer than 11 students to one teacher, the second-best rate in the country. Virginia schools rank fifth for average 20-year return on investment for their students.

Michigan ranks above average in every metric we analyzed. In-state attendance is a particularly important factor in our study. Michigan high school graduates are especially likely to choose to attend a local institution of higher learning. This state also has a low student-to-teacher ratio, ranking 10th in that metric with roughly 14 students per teacher.

One of the best states for community colleges is also a great state for those pursuing four-year degrees. Our data shows North Carolina has a graduation rate of 64%, which is seventh best in the nation. Higher education in North Carolina is also on the affordable side, meaning graduates shouldn’t be saddled with too much student debt after they leave college. North Carolina ranks 12th in average net price.

California schools offer the highest return on investment. The Golden State also ranks in the top 10 for average net price and 15th for in-state attendance rate. Student-to-teacher ratio is the only metric for which California ranks below average: It holds last place.

Roughly 34% of high school graduates in Washington go on to attend college in Washington, giving the state the ninth-highest rate in this metric. Another reason to attend school in Washington is the price. Washington ranks first for average net price at $8,033 per year. Only the relatively low graduation rate, 42%, stops Washington from claiming a spot in the top five overall ranking.

Wyoming offers a little bit of everything when it comes to advantages in higher education: It ranks within the top 20 in four of the five metrics. The return on investment and student-to-faculty ratio scores particularly stand out in the Cowboy State, ranking at 13th and 15th respectively. Not as many Wyoming high school graduates choose to continue their education in their home state, which hurts Wyoming’s overall score.

Iowa has an average graduation rate of 73%, the highest in our study. The return on investment for in-state graduates of Iowa schools is also attractive; Iowa ranks eighth in that metric. Despite these two top-10 scores, Iowa falls to tenth overall because of below-average scores in the other three.

New York is one of the more affordable states to get a higher education. According to our data, the average net price for in-state students is just $10,200 per year. In that metric, New York ranks fourth. New York also ranks above average in average return on investment and graduation rate.

To find the best states for higher education, SmartAsset looked at data for all 50 states across the following five metrics:

Data for metrics were found using a weighted average of the schools in each state.

We ranked each state in the five metrics. We then found each state’s average ranking, giving a double weighting to graduation rate. Using this average ranking we created our final score. We graded our score on a curve, with the top 15% of states getting an A and the bottom 15% getting an F.