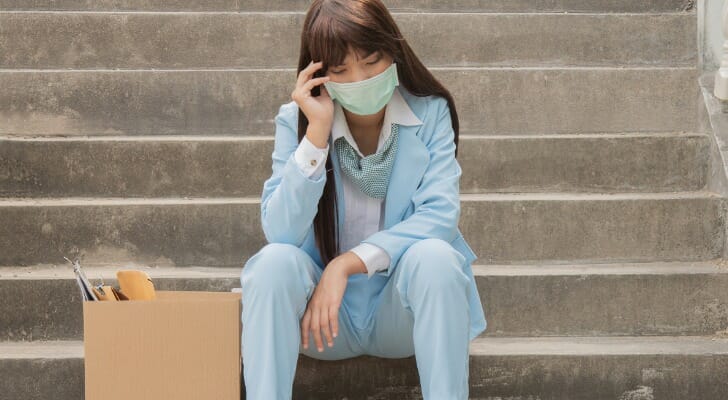 Last Friday, the Bureau of Labor Statistics (BLS) published its anxiously awaited April 2020 Employment Report, perhaps the first comprehensive look beyond jobless claims on how coronavirus and the attendant economic shutdowns have affected unemployment in America. The report paints an alarming picture. Between February 2020 and April 2020, nonfarm private employment fell by more than 20 million positions, and the unemployment rate jumped from 3.5% to 14.7% – a figure that exceeds the maximum unemployment rate during the Great Recession.

Though payrolls declined across all industries, some had more layoffs than others. In this study, SmartAsset identified the industries that shed the most and fewest jobs between February and April 2020. Using BLS data, we compared paid employment, i.e. payroll, between those two months for 18 industries. For details on our data sources and how we put all the information together to establish our findings, check out the Data and Methodology section below. 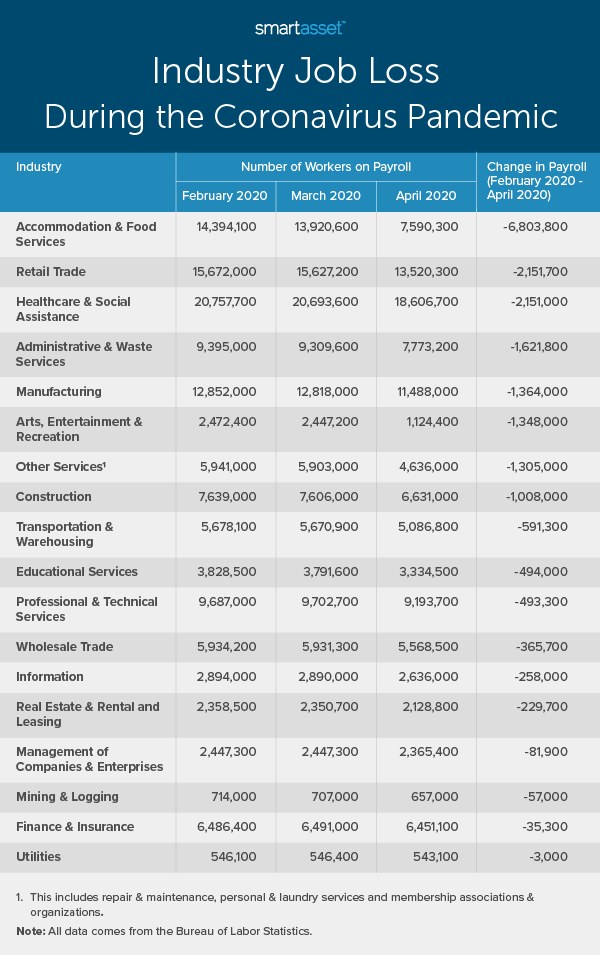 Industries That Have Shed the Most Jobs During COVID-19

The accommodation & food services industry saw the greatest decline in payroll between February 2020 and April 2020. According to the BLS, payroll fell by about 6.80 million over the course of the two months, with most of the drop occurring between March and April. In March, the BLS reported that there were 13.92 million workers in the accommodation & food services industry. In April, there were fewer than 7.59 million employed workers in the industry.

About 2.15 million jobs were lost between February and April in both the industries of retail trade and healthcare & social assistance. As a percentage of pre-coronavirus workforces, those cuts in payroll represent 13.73% of the retail trade industry and 10.36% of the healthcare & social assistance industry. Like in the accommodation & food services industry, retail trade has been hugely affected by stay-at-home orders and social distancing measures put in place to contain the spread of the virus. Within the healthcare & social assistance industry, workers in the sub-industries of dentist offices and child daycare services were most likely to be laid off. Dentist payrolls fell from close to 1 million in February to fewer than 500,000 in April, while child daycare services payrolls dropped by some 320,000, from roughly 1 million to about 680,000, over the same time period. 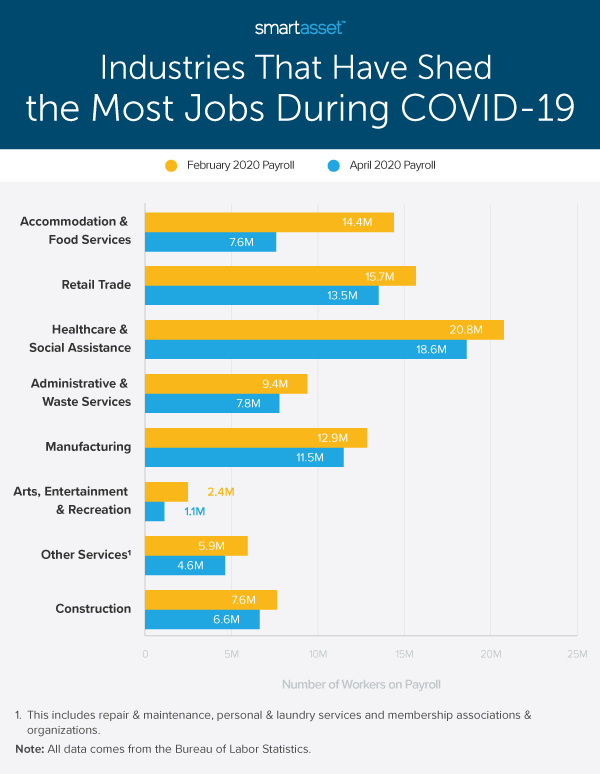 Industries That Have Shed the Fewest Jobs During COVID-19

In terms of layoffs during the coronavirus pandemic, the utilities industry has been the least scathed so far. In February and March of 2020, about 546,000 individuals were employed in the industry. That number fell by 3,000 between March and April, to 543,100.

Finally, management of companies & enterprises ranks as the fourth industry with the fewest jobs shed during COVID-19. Management of companies & enterprises includes occupations such as accountants, auditors, financial managers and general operations managers. Payroll within the industry fell by 81,900 between February 2020 and April 2020. As a percentage of February 2020 payroll, this marks a less than 4% decline in the industry’s workforce. 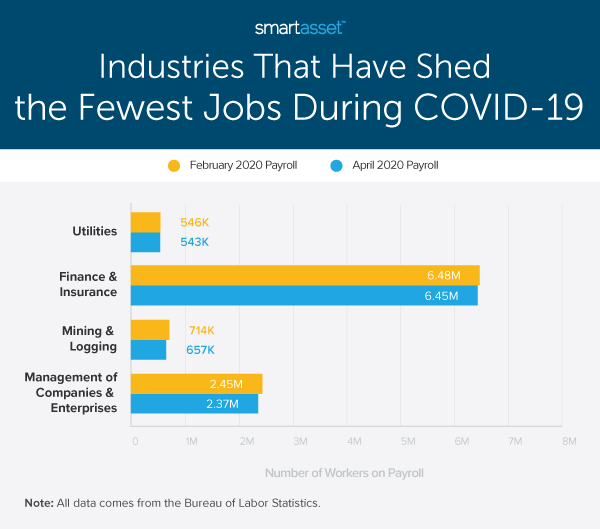 Data for this study comes from the Bureau of Labor Statistics’ April 2020 Employment Report. We looked at a total of 18 nonfarm, private industries and found the difference in February 2020 payroll and April 2020 payroll. All payroll figures are seasonally adjusted. February figures from the BLS are finalized while March and April figures are both preliminary estimates.