The Fastest-Growing Job in Each State – 2020 Edition 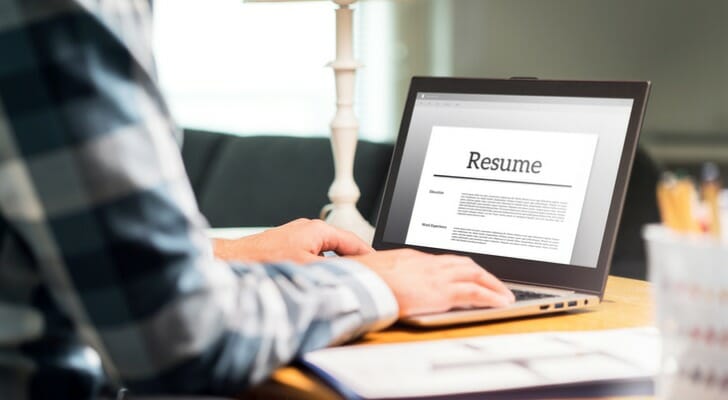 The recent devastating U.S. unemployment rate, which shot up to 14.7% in April amid the coronavirus crisis, has highlighted the importance of achieving job security. In the short term, it means the ability to cover day-to-day expenses; in the long term, it means the ability to address both financial emergencies as well as save up for bigger goals. And while different places had varying levels of joblessness according to recent unemployment data, it’s equally important to consider more long-term trends to find the industries that might be growing the fastest. That’s why SmartAsset crunched the numbers to find the fastest-growing jobs across the country.

To identify the fastest-growing job in each state, we examined employment data from the Bureau of Labor Statistics (BLS). We found the percentage change in the number of employees in every occupation from 2015 to 2019. For details on our data sources and how we put all the information together to create our final rankings, check out the Data and Methodology section below.

This is the fourth version of SmartAsset’s study of the fastest-growing job in each state. Check out the 2019 version here. 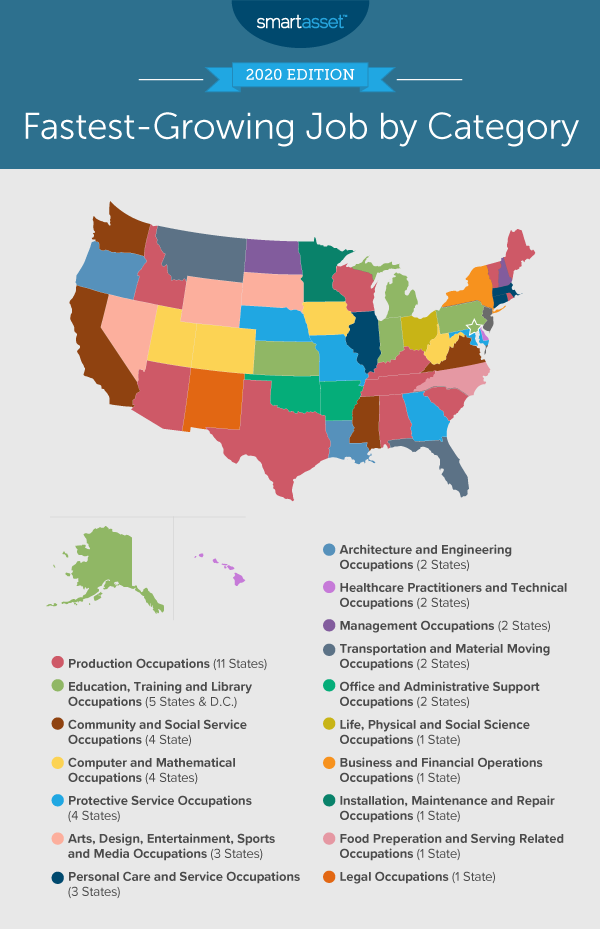 Production occupations are the fastest-growing occupations in 11 states: Alabama, Arizona, Idaho, Kentucky, Maine, Rhode Island, South Carolina, Tennessee, Texas, Vermont and Wisconsin. The largest recent four-year job growth in this occupation category occurred in the state of Rhode Island, where structural metal fabricators and fitters increased from 230 in 2015 to 1,780 in 2019, almost 674%. Metal and plastic multiple machine tool setters, operators and tenders ranked as the fastest-growing job in two of these states – Arizona and Tennessee. This job involves setting up, operating or tending more than one type of cutting or forming machine or robot. In the four-year period from 2015 to 2019, the number of employees in this job increased by more than 276% in Arizona and by almost 374% in Tennessee. In Maine, metal and plastic milling and planing machine setters, operators and tenders had a four-year growth of 650%.

Across the 11 states and 10 jobs, metal and plastic forging machine setters, operators and tenders in South Carolina saw the largest accompanying increase in earnings. With employment increasing by about 404%, average earnings for South Carolina workers in that job also rose by more than 36% from about $34,800 in 2015 to almost $47,500 in 2019.

Education, training and library occupations are the fastest-growing occupations in the District of Columbia and five states: Alaska, Indiana, Kansas, Michigan and Pennsylvania. Within this group, postsecondary philosophy and religion teachers in Kansas saw the largest four-year percentage change in employees, with an increase of 625%. They also saw the largest four-year increase in average earnings, with wages rising from $54,620 to $82,660 between 2015 and 2019 – or an uptick of more than 51%.

The fastest-growing job in four other locales in this group were also postsecondary teachers, though of different subjects: nursing in Alaska, education in the District of Columbia, architecture in Michigan and health specialties in Pennsylvania. The only state where the fastest-growing education, training and library occupation was not teaching-related was in Indiana, where from 2015 to 2019, museum technicians and conservators saw an almost 138% increase in the number of employees and a 6.85% increase in average earnings.

In California, Mississippi, Virginia and Washington State, the fastest-growing jobs fall under the classification of community and social services occupations. Although they took a slight decrease in average pay in recent years (about 4%), marriage and family therapists in California saw the largest increase in this group, growing by more than 280% from 2015 to 2019. Probation officers and correctional treatment specialists – those who assist in rehabilitation of law offenders in custody or on probation or parole – grew by more than 115% in Mississippi over that time period.

Community health workers were the fastest-growing job in both Virginia and Washington State. The number of employees increased by about 112% and 247% in these states, respectively, from 2015 to 2019.

In Georgia, Maryland, Missouri and Nebraska, the fastest-growing jobs fall under the category of protective services. First-line supervisors of correctional officers in Missouri saw an employment increase of more than 361% between 2015 and 2019. Over the same time period, bailiffs in Maryland and forest fire inspectors and prevention specialists in Georgia saw increases of about 315% and 255%, respectively. And even though they experienced an approximately 30% decrease in average earnings, the number of private detectives and investigators in Nebraska increased from 100 in 2015 to 320 in 2019, a 220% jump.

The fastest-growing occupations in three states – Nevada, South Dakota and Wyoming – are arts, design, entertainment, sports and media occupations. The number of interpreters and translators in Nevada jumped from 250 in 2015 to more than 1,200 in 2019 – a 388% increase – though average earnings fell by more than 12%. The number of interpreters and translators also saw an approximately 189% increase in South Dakota, as well as a slight pay cut of about 3%. In Wyoming, the fastest-growing job was merchandise displayers and window trimmers, with a four-year increase of 171% in number of employees.

A number of other jobs have seen noteworthy employment growth between 2015 and 2019. They are as follows:

While Ohio conservation scientists’ average earnings dropped about 3% during this time, New Mexico judges and magistrates’ average earnings increased by more than 133%. Average 2019 earnings for financial examiners in New York were about $120,800, approximately 5% higher than they were in 2015. Average earnings for Florida traffic technicians jumped almost 31% over that same four-year period, from roughly $35,600 to $46,600.

All data, including earnings data, comes from the Bureau of Labor Statistics’ Occupation Employment Statistics.