The Fastest-Disappearing Job in Each State – 2020 Edition 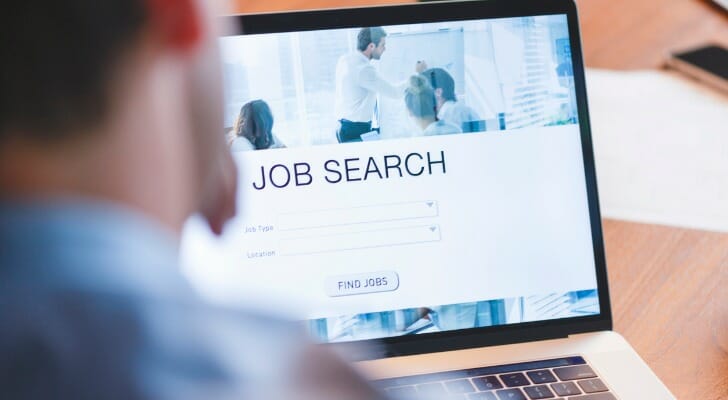 The job market is constantly changing. Jobs in a certain field and geographic area may be abundant one decade only to experience a sharp decline the next. This can be because of many factors, including migration patterns and technological advances, that eliminate positions and industries from parts of the country. That can make it more difficult for workers to earn and save money. With those shifts in mind, SmartAsset decided to find the fastest-disappearing job in each state.

To do so, we analyzed data for 2015 and 2019 (the latest year available) from the Bureau of Labor Statistics (BLS) for each of the 50 states as well as the District of Columbia. For details on our data sources and how we put all the information together to create our findings, check out the Data and Methodology section below. 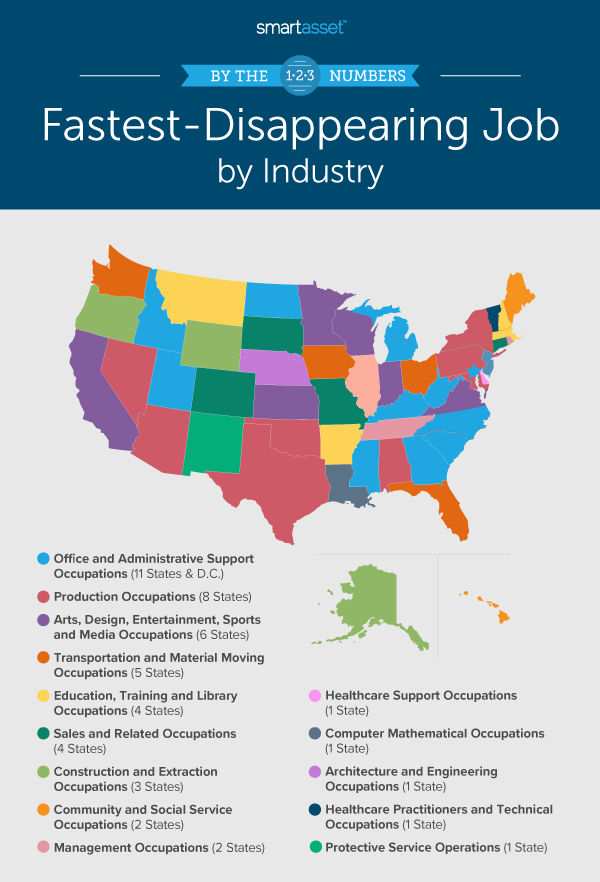 Office and administrative support occupations is the hardest hit industry in 11 states – Georgia, Idaho, Illinois, Kentucky, Michigan, Mississippi, North Carolina, North Dakota, South Dakota, Utah and West Virginia – as well as in the District of Columbia. The fastest-disappearing jobs in these states include telephone operators, word processors & typists, proofreaders & copy markers, statistical assistants and procurement clerks. The biggest drop in this industry category came in Utah, where the number of telephone operators decreased by more than 95% in the five-year period from 2015 through 2019 – also the largest drop in the entire study. It is important to note that none of these jobs (though full earnings data was not available for word processors and typists in Mississippi) saw a decrease in average earnings in that period. In Georgia, though the number of statistical assistant jobs fell by nearly 89%, the average earnings actually increased by more than 83%, from $28,010 to $51,400. This was the largest increase in salary for any of the jobs in this study.

The fastest-disappearing jobs in eight states – Alabama, Arizona, Maryland, Nevada, New York, Oklahoma, Pennsylvania and Texas – fall within the industry category of production occupations. Some of the individual occupations represented here include dental laboratory technicians in Arizona (61% decrease); painting, coating & decorating workers in Pennsylvania (74% decrease) and textile bleaching & dyeing machine operators & tenders in Alabama (75% decrease). The fastest-shrinking job in this industry category is gas plant operators in Maryland, where the number of employees in the occupation decreased by about 80% in the five-year period from 2015 through 2019.

There are six states whose fastest-shrinking jobs fall into the industry category of arts, design, sports and media occupations: California, Indiana, Kansas, Minnesota, Virginia and Wisconsin. The fastest-disappearing job in five of these states is that of music directors and composers, with declines in the number of employees ranging from 56% in Virginia to almost 83% in Wisconsin. In Minnesota, the sixth state mentioned above, the fastest-disappearing job was that of set and exhibit designers, with a drop in the number of employees exceeding 70% in the five years from 2015 through 2019. Average earnings for set and exhibit designers in Minnesota increased during this time, however – albeit marginally – from $55,780 in 2015 to $56,540 in 2019.

BLS data shows that five states claim the transportation and material moving occupations industry as their hardest hit industry in terms of fastest-disappearing jobs. These states are Florida, Iowa, New Jersey, Ohio and Washington. Some of the jobs most affected are motorboat operators in Florida and conveyor operators & tenders in New Jersey. We see the largest decline in Washington State, where the number of non-emergency ambulance drivers and attendants fell by nearly 95% in the five years from 2015 through 2019. Washington State was also one of the few states to see a drop in salary for these workers over this time period, a decrease of 5.49%.

There are a number of other jobs whose workforces shrank rapidly in recent years. Some of these include:

The largest five-year decrease in average earnings for a state’s fastest-disappearing job was in Hawaii, where religious activities and education directors saw a salary decrease of 10.95%.

All data, including earnings data, comes from the Bureau of Labor Statistics’ Occupation Employment Statistics.