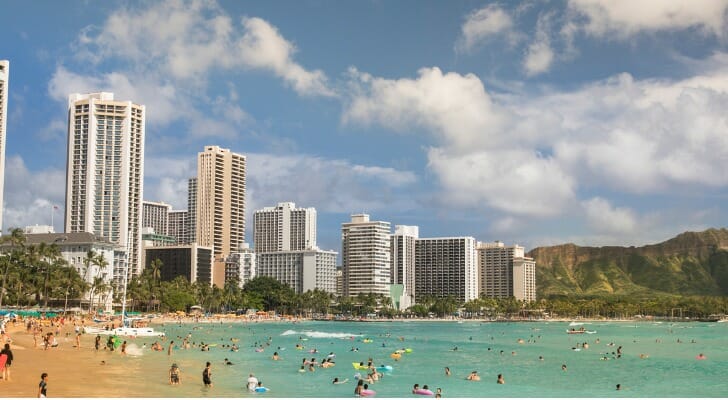 Capital cities in the United States share many of the same characteristics. Housing the state and local city bureaucracy, capital cities often times have stronger economies than other cities in the state. The best state capitals also tend to have strong local histories that broaden the local cultural offerings for residents. With that increased interest can come some problems, however. Many state capitals suffer from rising housing costs that leave residents unable to build their savings. That hurts the overall quality of life.

Below we look at these and other factors to rank the most livable capital cities in America. Specifically, we compare the cities across metrics like discretionary income, unemployment rate, dining and entertainment establishment rate, violent crime rate and property crime rate. Check out our data and methodology below to see where we got our data and how we put it together.

This is SmartAsset’s fifth annual study of the best state capitals. Check out the 2017 version here. 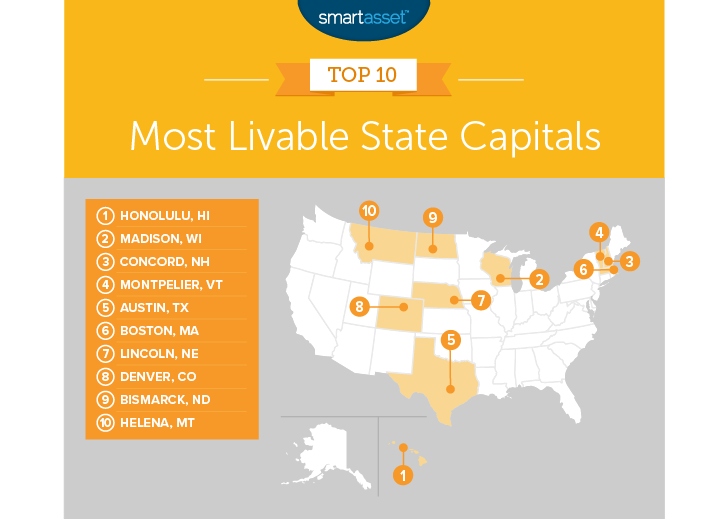 Honolulu, Hawaii takes the top spot as the most livable state capital, according to our data. As far as capital cities go, Honolulu is certainly an expensive place to live. After all, it’s a favorite tourist destination. The good news is that high local incomes offset the high cost of living. The median Honolulu household earns about $63,400 per year, while the median home costs just under $1,400 per month. That should leave the average household here with about $46,800 in discretionary income. Another plus is the availability of local jobs. This city has an unemployment rate under of 2.6%, according to BLS data.

Mad City takes second. We have ranked Madison highly in a number of different studies, including the cities with the best work-life balance. So it is no surprise to see it top this chart. Madison puts up very consistent ranking. In four out of the five metrics we tracked, Madison ranked eighth. Only in discretionary income, which ranked a respectable twelfth, did Madison not secure the eighth spot.

The Granite State’s capital comes in third. Concord is one of the smaller state capitals in the nation with a population hovering around 43,000 since 2010. But this smaller-than-usual capital is also one of the nation’s most livable. Concord has the lowest unemployment rate of any capital at 2.3%. That should make finding stable employment an easy task for any local. And another plus is that your salary should allow you to find an affordable home. Concord ranks 11th for discretionary income.

Montpelier has the jobs, the high incomes and the low crime rates that everyone imagines when picturing a livable city. In each of those metrics, Montpelier ranks in the top 10. So why is Montpelier not ranked higher? According to Census Bureau data Montpelier is not the liveliest of cities. Around 8% of all establishments in the city are dedicated to bars, restaurants or entertainment, a very low score.

For residents concerned with saving money, Austin is a great place to be. According to our data the median household here should have about $46,400 left over after paying for housing a top 10 rate. All the discretionary income means residents can start building a down payment or invest with an Austin-based financial advisor. One area where Austin could improve is safety. While Austin ranks in the top 20 for both metrics it does fall outside the top 10. That’s why it fell to fifth.

Massachusetts’ biggest city and capital takes the sixth spot. If you are looking to have fun, Boston is one of the best capitals in the country. According to our data, more than 12% of all establishments here are dedicated to dining, bars or entertainment. Overall, Boston ranks second in that metric. Boston also has the third-lowest property crime rate in the study. Dragging Boston down the ranks is the slightly high unemployment rate of 3.8% and the above-average violent crime rate.

If you’re looking for work in a city where you can save some money, Lincoln isn’t a bad place to end up. According to Census Bureau data, the median household here should have about $40,700 left over after tackling housing costs. That’s a top-20 rate. And few cities have more available employment opportunities than Lincoln. This city has an unemployment rate of only 2.9%. Anyone looking to buy a place in Lincoln may want to be ready for increasing the amount in property tax payments. Nebraska property taxes are the sixth-highest in the nation.

Denver is one of the most popular cities in the country. Millennials are moving here in droves. Furthermore, this city has one of the fastest growing housing markets. What makes this city so popular is its livability. Incomes have largely kept up with the large rise in housing costs. Our data suggest the median household has just under $42,500 left over after paying for housing. Coupled with the high incomes is an availability of work. This city has an unemployment rate of 2.9%.

North of Colorado, and ranked one spot behind, is North Dakota, where Bismarck, its capital, comes in as the ninth most livable capital in the country. Bismarck is a great city to live for people who are looking to settle down into a quiet life filled with saving, home buying and retirement. According to our data, this city has the fourth-highest discretionary income, sixth-lowest unemployment rate and the fifth-lowest violent crime rate. Unfortunately, Bismarck residents are dependent on themselves for entertainment. This city ranks fiftieth for entertainment establishments as a percent of all establishments.

Helena grabs the last spot in the top 10. In fact, it just beat out Boise by less than a point on our final index. This capital has good all-around scores, without scoring spectacularly well in any single metric. Its highest score came in discretionary income, where it ranked 13th, with an average discretionary income of $42,500. Its worst score came in property crime rate, where it has about 3,900 property crimes per 100,000 residents. That’s the 27th best rate.

In order to find the best capital cities to live in, we analyzed data for every state capital in the U.S., plus Washington, D.C. We compared them across the following five categories:

Tips for Making the Most of your Discretionary Income