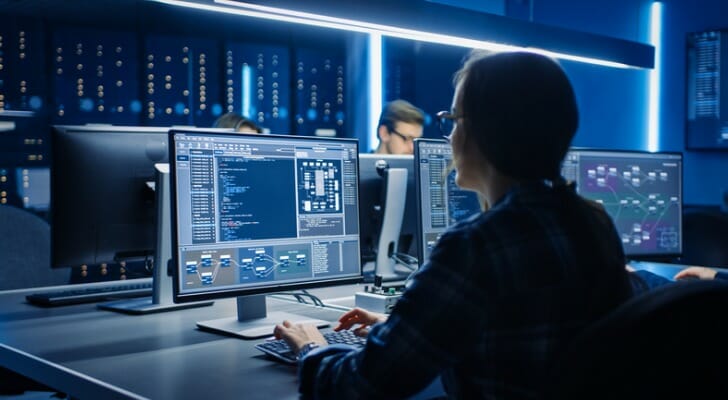 The tech industry is one of the most lucrative in the U.S. Though the COVID-19 crisis has cost the industry jobs just like virtually every industry, going into tech remains the goal of many young people, especially those with degrees in hard sciences. Though many people associate tech work with Silicon Valley, there are actually copious jobs in tech throughout the country that can help workers build up their emergency and retirement savings. SmartAsset analyzed the data to uncover the metro areas in America that are the best places to work in tech.

We examined 50 metro areas across five metrics: percentage of workers employed in tech, average salary for tech workers, ratio of average tech salary to average salary across all fields, percentage of currently listed bachelor’s jobs that are in tech and cost of living. For details on our data sources and how we put all the information together to create our final rankings, check out the Data and Methodology section below. 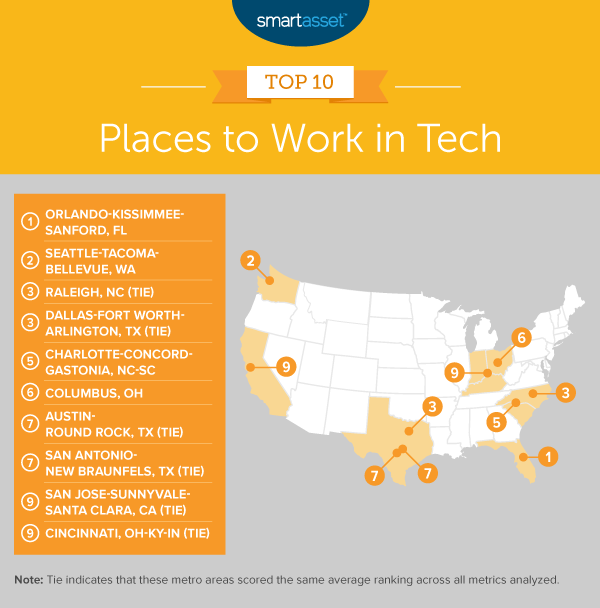 Though the Orlando, Florida area may be better known for theme parks, tech workers are the big earners here, with an average salary that is 1.82 times the average salary across industries, the second-highest ratio in the study. The Orlando metro area also ranks eighth-highest for the percentage of bachelor’s jobs listed that are in tech (23.60%) and eighth-lowest for annual cost of living ($20,333).

The Seattle, Washington metro area, home to Amazon and Microsoft, ranks third-highest for percentage of the workforce employed in tech, 7.31%, and for average salary for tech workers, $121,380. It also has a salary ratio between tech workers and other workers of 1.77, fourth in this study. Seattle is expensive, though, ranking near the bottom of the list with an annual cost of living of $27,863.

Tied for third place with the Dallas, Texas metro area, the Raleigh, North Carolina metro area has a population in which 6.24% of workers are employed in tech, the fifth-highest rate for this metric in our study. Raleigh finishes 10th-highest in terms of salary ratio, with tech workers earning 1.71 times more than workers across all fields. The average salary for tech workers is $94,040, the 14th-highest across all 50 metro areas we studied.

Tied for third place in the study, the Dallas, Texas metro area is a place where tech jobs thrive, with 4.33% of workers employed in tech, the 12th-highest percentage for this metric across the 50 metro areas we studied. The Dallas metro area also comes in 12th-highest for average tech worker’s salary, at $94,450. That’s 1.76 times the average salary across all fields, which is the sixth-highest ratio in this study.

The Charlotte-Concord-Gastonia metro area, spanning parts of North and South Carolina, has the third-highest ratio of average tech salary to average salary across all fields, at 1.77. It also places in the top 20 for the percentage of workers employed in tech (4.05%) and average salary for tech workers ($92,470).

The Columbus, Ohio metro area ranks in the top 25 for all five metrics. It has the 14th-lowest cost of living of the 50 metro areas we studied, at $20,604. Columbus also ranks 15th-highest for the percentage of workers employed in tech, at 4.21%. The average salary for those workers is $87,390, the 25th-highest of all places in the study.

The Austin, Texas metro area, tied for the No. 7 spot, is the second of three Lone Star locales in our top 10. It ranks in the top 10 for two metrics. Its 6.22% of workers employed in tech ranks sixth-highest in the study, while its 27.52% of listed bachelor’s jobs in tech fields ranks fifth-highest.

Tied for No. 9, the San Jose, California metro area is in the heart of Silicon Valley, traditionally thought of as the home of the tech industry. The San Jose metro area ranks first in the study for the percentage of workers employed in tech, at 12.67%, as well as for average salary for tech workers, at $133,790. Why is it only ninth in the top 10, then? Because it’s expensive. San Jose ranks last on our list in terms of cost of living, with a figure of $35,828.

Tied for No. 9 with San Jose, California is the Cincinnati metro area, spanning parts of Ohio, Kentucky and Indiana. This metro area has a cost of living of $19,928, the second-lowest in the study. It ranks 13th-highest for the ratio of average tech salary to average salary across all fields, at 1.69. Furthermore, it ranks 24th-highest in terms of the job market for tech workers: 16.66% of currently listed jobs for bachelor’s degree holders are in the tech industry.

To find the best places to work in tech, we ranked 50 metro areas with a population of 1 million or more, and for which full data was available, across the following metrics:

Our methodology has been changed from last year’s version of this study in order to most accurately reflect current data as a result of the coronavirus pandemic. To read the 2019 study, see here.