The Best American Cities to Work in Tech in 2019 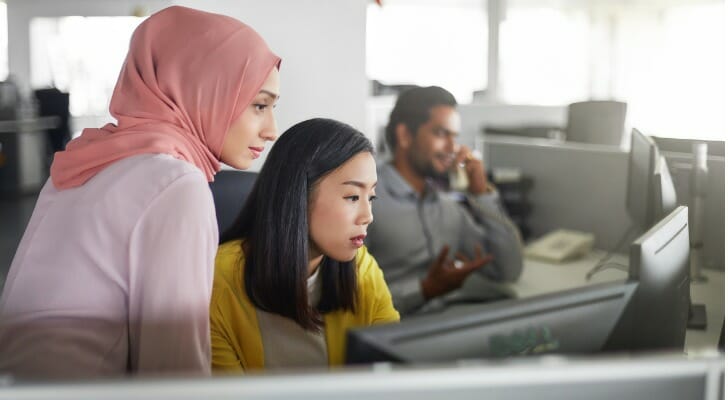 Tech jobs are in high demand across the country. The positions pay well, the companies often offer great benefits and your work helps to create products and services that run the world. While you might think that you have to live in New York or the Bay Area to work in tech, there are actually a lot of cities with great career opportunities for tech workers without the high cost of living that comes with being a resident of those major coastal cities. Snagging a job in a place with a more affordable mortgage can be a strategic way to help your tech salary go further. So for the sixth year in a row, SmartAsset takes a look at the best American cities to work in tech.

To find this year’s best cities for tech workers in America, we examined data for 172 cities and compared them across five different metrics: average salary, average cost of living, tech employment concentration, unemployment rate and ratio of average pay to tech pay. For details about our sources and how we put the metrics together to create our final rankings, check out the Data and Methodology section below.

This is SmartAsset’s sixth annual study of the best cities to work in tech. Check out the 2018 version of the study here. 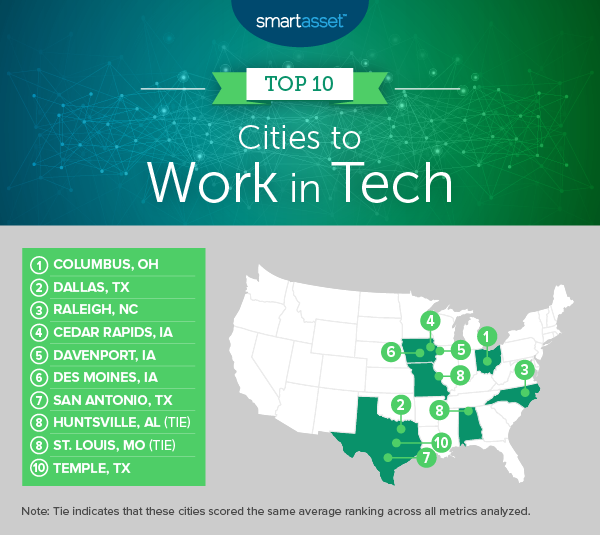 Columbus, Ohio takes the top spot in this study for the third year in a row. Columbus has a 1.80 ratio of tech salary to average salary. This means that the average worker in tech is earning 1.80 times the wage that the average worker across all industries is in Columbus. That’s tied for the 12th-highest ratio of any city in our study. The average tech worker’s salary is $92,440, a top-15 rate. The cost-of-living index, at 90.90, is lower than the national average.

Next is Dallas, the first of three Texas cities on this list. Dallas has the 14th-highest average tech salary in our study at $93,820. That’s 1.78 times more than the average salary across all professions in Dallas. Dallas has a fairly big tech scene, with 4.23% of workers employed at tech companies. That’s a top-20 rate. The cost-of-living index in Dallas is 90.90 as well.

Raleigh, North Carolina is third in the top 10. Almost 5.70% of its workers are working in the tech sector, making that the ninth-highest percentage in this study. The town has an average salary of $91,680 for tech workers, which is 1.74 more than workers make on average across all other industries. The unemployment rate in Raleigh for those with bachelor’s degrees is just 2.6%. These conditions are favorable to those eyeing mortgage rates and see considering how much house they can afford.

Cedar Rapids, Iowa is the first of three consecutive towns in the Hawkeye State. Cedar Rapids has 4.14% of its workers employed in tech jobs, the 24th-highest rate for this metric in this study. It also has a fairly low unemployment rate for those who hold at least a bachelor’s degree, at 1.8%. The average tech salary, though, is the third-lowest amount in the top 10, at $83,260. The cost-of-living index in Cedar Rapids is 93.90.

Davenport, Iowa has an unemployment rate of just 1.4% for those with at least a bachelor’s degree. Davenport ranks 10th for this metric in the study overall. It ranks a bit lower in terms of salary – at $83,090, and 43rd overall – and the cost of living index is 94.60. The percentage of workers in Davenport who are employees at tech firms ranks in the top third of the study, at 2.88%.

Des Moines, Iowa is the final Iowa city in the top 10. It has the 16th-highest percentage of workers employed in tech in this study, at 4.44%. The average tech worker salary is $83,820, but the cost of living index is fairly low at just 90.60, so the money you earn could go further. The wage ratio of tech to non-tech workers is 1.61, a rate that ranks toward the middle of all cities in the study. For those comparing mortgage rates and looking to set down roots, Des Moines could be an attractive place for a tech worker.

San Antonio, Texas is next, and it sports a wage ratio of 1.82, showing that the average tech worker is doing well in this south Texas city, making almost double the salary of the average worker across all professions in San Antonio. The city has the second-lowest percentage of workers employed at tech firms in the top 10, though, at 2.70%. It has the 20th-lowest cost of living in our entire study, with a cost-of-living index of just 86.90, and has an average tech salary of $84,790.

Huntsville, Alabama has 6.77% of workers employed at tech companies, the third-highest rank for this metric in our study. It also has an average salary of $97,340, tied for tenth-highest in the study overall. The cost-of-living index in Huntsville, at 93.60, ranks toward the middle of the study. Similarly to Dallas, the wage ratio of the average tech salary to the average salary across all fields in Huntsville is 1.78, so tech workers are clearly among the best-compensated employees in the city.

A final Texas town rounds out our list. Temple has the lowest percentage of workers employed in tech in our top 10, specifically 2.09%. The average tech salary in the city is $78,770, which is also the lowest rate among the cities in the top 10. Where Temple shines, though, is in its cost of living index of just 85.10, the 12th-lowest rate for this metric in the study overall. It also has the 12th-best wage ratio in the study, at 1.79. Essentially, you may not be making as much money in Temple as in other cities, but you’ll be among the best compensated workers in town, and your money will go far. 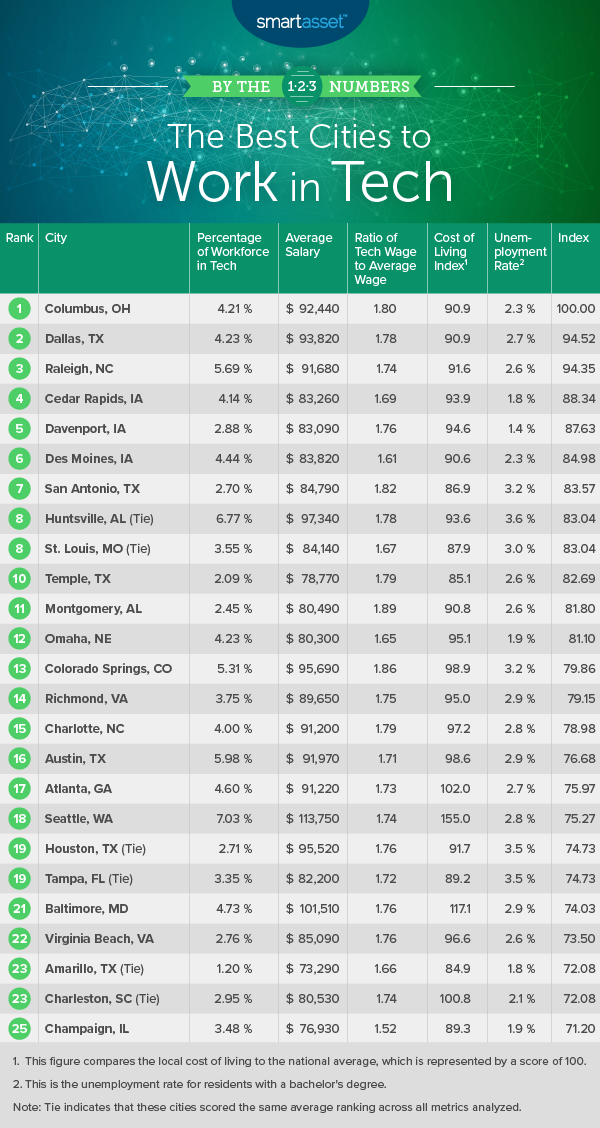 SmartAsset compared 172 cities across five metrics to find the best cities to work in tech. Specifically, we considered the following factors: