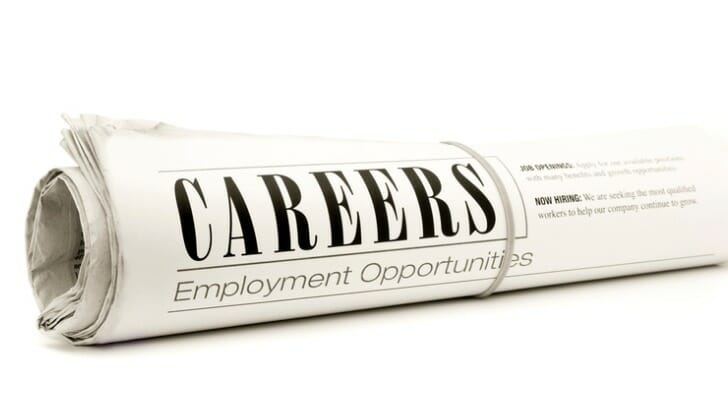 The ongoing coronavirus crisis has impacted nearly all facets of life, and one of the most difficult challenges for Americans to deal with has been the disruption to the job market, a fact that can jeopardize their hard-earned savings. While the national unemployment rate was still a substantial 11.1% in June 2020, this percentage marks a decline from previous months as people across the U.S. look for ways to adjust to the new normal and ways to stay employed. Some parts of the U.S., though, have a better chance of offering job prospects in this environment. SmartAsset analyzed data from various sources to find the metro areas in the country with the best career opportunities in the COVID-19 downturn.

To find these particular places, we looked at 200 metro areas across seven metrics: unemployment rate, change in total employment over the past year, median income, income growth, annual housing costs, number of career counselors and the number of post-secondary teachers. For details on our data sources and how we put all the information together to create our final rankings, check out the Data and Methodology section below. 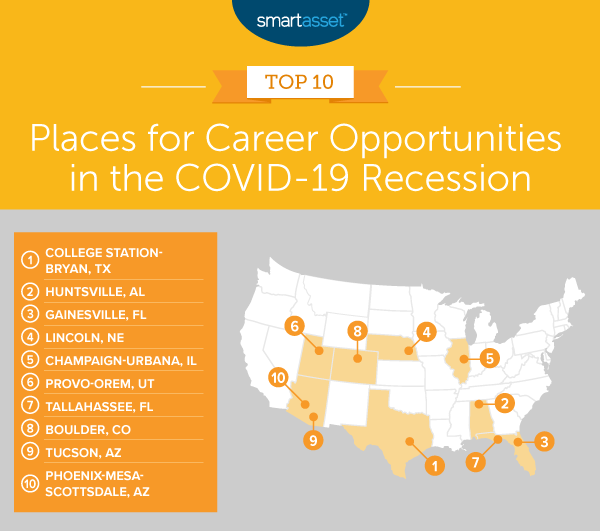 College Station-Bryan, Texas kicks off our top 10. It leads the study in three different categories: income growth over time (37.22%), number of career counselors per 1,000 workers (5.87) and number of post-secondary teachers per 1,000 workers (74.92). This metro area also places third overall for its relatively small drop in total employment between May 2019 and 2020, decreasing just 3.48%.

Huntsville, Alabama places in the top 10 of the study for two different categories: It had the sixth-lowest unemployment rate in May 2020, at 7.6%, and the eighth-highest income growth over a career, at 30.47%. While the metro area finishes in the bottom half of the study for its low number of career counselors and post-secondary teachers per 1,000 workers, it ranks within the top 50 for its relatively small drop in total employment over the past year (-7.26%) and its relatively high 2019 median income (almost $42,000).

Gainesville, Florida’s highest-ranking metric is the number of post-secondary teachers per 1,000 workers, for which it comes in fourth, at 35.95. Opportunities to further one’s skills through higher education and professional development are also plenty in this metro area: Gainesville ranks 10th-best in the study for its high number of career counselors per 1,000 workers, at 3.60, and 19th-best for its relatively low May 2020 unemployment rate of 8.7%.

Lincoln, Nebraska ranks first overall for unemployment rate as of May 2020, at a low 5.0%. It has one other metric for which it ranks in the top 20, coming in 15th-best for the change in total employment between May 2019 and May 2020 (it fell just 5.77%). Lincoln is in the top quarter of the study for income growth over the course of a career, with overall growth of 19.39%.

Champaign-Urbana, Illinois has the second-highest income growth over a career of all the metro areas we studied, going up 35.29% over time. Champaign-Urbana has 3.78 career counselors per 1,000 workers, the seventh-highest rate for this metric in the study. The metro area also has one other top-50 metric, ranking 46th-best for a relatively low May 2020 unemployment rate, at 10.0%. The 2019 median income in Champaign-Urbana was $40,370.

Provo-Orem, Utah has the second-lowest May 2020 unemployment rate in the study, at 6.2%. The home of Brigham Young University also ranks second overall for the total change in employment from May 2019 to May 2020, going down just 2.54% despite the pandemic. Provo-Orem doesn’t rank as well for median annual housing costs, which amount to $14,508 on average, but the metro area has top-15 rates for its high number of career counselors per 1,000 workers and strong income growth over the time span of a career.

Tallahassee is the second Florida metro area on this list, ranking fifth-best for a 31.32% income growth over the time span of a career. Tallahassee also ranks in the top 20 for two other categories, coming in 12th-best for its high number of post-secondary teachers per 1,000 workers (29.14) and 19th-best for its relatively low May 2020 unemployment rate (8.7%).

Two Arizona metro areas end this list. Taking the No. 9 spot is Tucson, Arizona. Tucson comes in 12th-best in the study for its relatively low unemployment rate, which was 8.4% in May 2020. It comes in 11th-best in terms of the change in total employment over the past year, seeing a dip of only 5.36%. The metro area does not rank as high for median income, for which it comes in 118th out of 200, at $36,900. But it ranks within the top 40 of the study for its high number of career counselors per 1,000 workers, at 2.72.

The final metro area on this list is Phoenix-Mesa-Scottsdale, Arizona, where the unemployment rate for May 2020 was 8.3%, 10th-lowest in the study. The Phoenix area also ranked ninth-best for the change in total unemployment over the past year, a dip of 5.14%. Though it excels in those two metrics, it ranks 137th out of all 200 places in our study for its high median annual housing costs, at $13,332 per year. 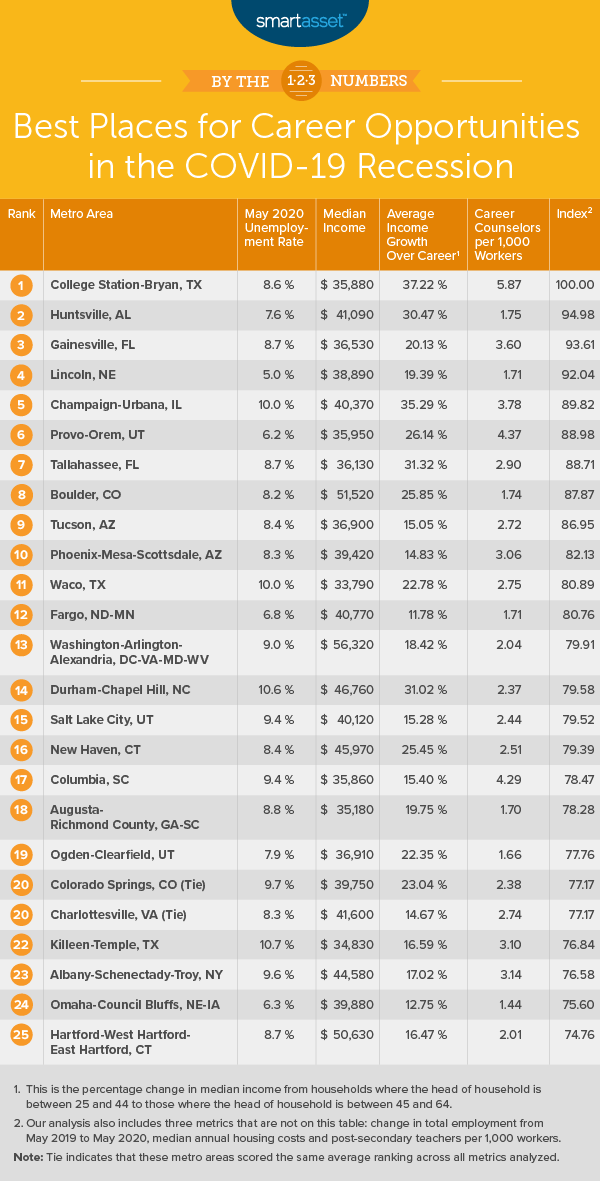 To find the best places for career opportunities in the COVID-19 recession, we analyzed data for 200 of the largest U.S. metro areas across the following seven metrics: