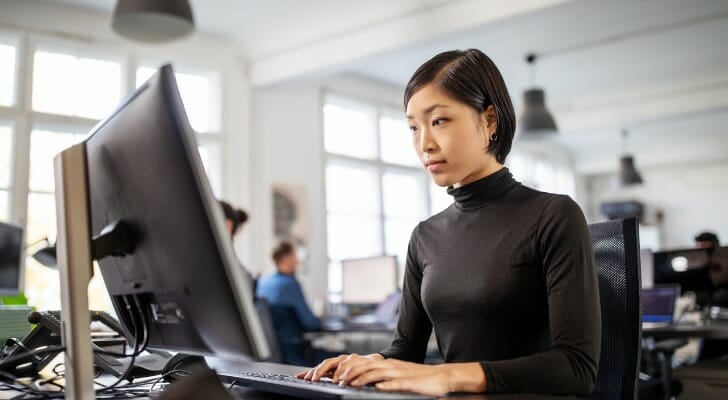 The Bureau of Labor Statistics (BLS) says that computer and information technology jobs are expected to have grown by 11% from 2019 to 2029, adding 531,200 new jobs in cloud computing, big data storage and collection and information security. The median annual wage for those jobs in May 2019 was $88,240, which is $48,430 higher than the median annual wage for all occupations.

But while tech jobs continue to outpace other occupations nationwide, women still face gender discrimination in the workplace. The BLS says that full-time women workers in all occupations earned $202 less per week than their male counterparts in the third quarter of 2020. This not only makes it harder for women to advance in their careers, but it also adversely affects their ability to save for retirement and cover many day-to-day expenses like food or housing. The employment landscape, however, continues to change. With that in mind, SmartAsset analyzed data to identify the best cities for women tech workers.

We compared 63 U.S. cities for which full data was available and ranked them according to the following metrics: gender pay gap in the tech industry, income after housing, women as a percentage of tech workers and three-year growth in tech employment. For details on our data sources and how we put all the information together to create our final rankings, check out the Data and Methodology section below.

This is SmartAsset’s seventh annual study on the best cities for women in tech. Check out the 2020 version here. 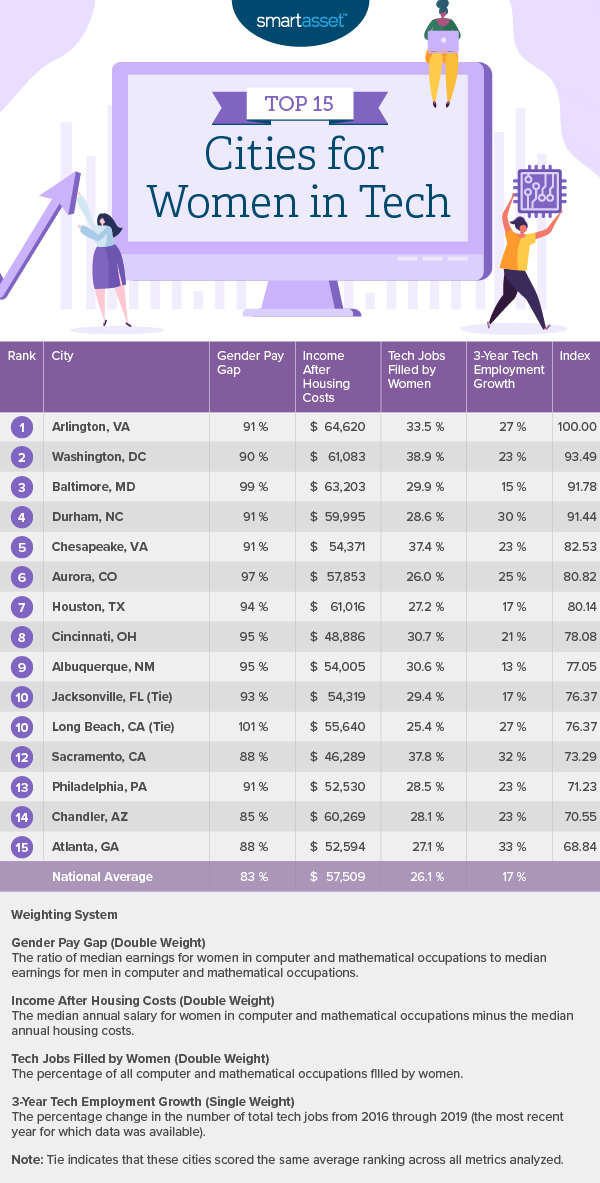 Arlington, Virginia is an “inside-the-beltway” suburb of Washington, D.C., and women make up 33.5% of their tech workforce, the sixth-largest on our list. Women tech workers in Arlington also have the eighth-largest income after housing, earning $64,620. Women in this city face the 12th-lowest pay gap in tech, earning 91 cents for every dollar that men make.

Located just across the Potomac River from Arlington, the nation’s capital has a tech industry that is made up of 38.9% women workers, the second-largest percentage for this metric in our study. Women in Washington D.C. get 90 cents for every dollar that their male co-workers make, the 16th-lowest pay gap overall. Furthermore, they have the 12th-highest income, earning $61,083 after housing.

Women in tech in Baltimore, Maryland face the second-smallest pay gap in the study, earning almost on par with their male counterparts – at 99 cents for every dollar that men make. The tech workforce in Baltimore is made up of 29.9% women, the 10th-largest overall, and they have the ninth-highest income – $63,203 after housing is deducted. Note, however, that the tech industry has grown only 15% in the three-year period from 2016 to 2019, placing Baltimore in the bottom half of the study for this metric.

Durham, North Carolina is the home of Duke University and part of the famed Research Triangle. Tech women in Durham earn 91 cents for every dollar that their male co-workers make, the 11th-smallest pay gap in our study. The Durham tech industry has grown 30% in the three-year period from 2016 to 2019, the 12th-biggest increase overall for this metric. Women make up 28.6% of the city’s tech workforce, the 14th-largest in the study.

Chesapeake is located in southern Virginia. Women make up 37.4% of its tech workforce – the fourth-largest in our study. Women in this city make 91 cents for every dollar that their male tech peers get and have an income of $54,371 after housing. The Chesapeake tech industry has seen a 23% growth in the recent three-year period from 2016 to 2019.

Tech women in Aurora, Colorado get 97 cents for every dollar that men make, the third-smallest pay gap in our study. The tech industry in Aurora has grown 25% in three years, the 21st-biggest increase on our list. And women tech workers in this city earn $57,853 after housing, the 19th-biggest income across all 63 cities in the study.

Cincinnati, Ohio has the fourth-smallest gender pay gap in tech – our study shows that women earn 95 cents for every dollar that men get. Women in the Queen City make up 30.7% of the tech workforce, the seventh-largest for this metric overall. Their income after housing – at $48,886 – ranks in the bottom half of the study. But the industry itself has seen a 21% growth in employment the three-year period from 2016 to 2019.

Tech women in Albuquerque, New Mexico make about 95 cents for every dollar that their male co-workers earn, the fifth-smallest gender pay gap in our study. While women make up 30.6% of the city’s tech workforce, the eighth-largest in the study, Albuquerque’s tech industry has experienced relatively slow growth. It has seen only 13% growth from 2016 to 2019.

Women in Jacksonville, Florida make up 29.4% of the tech workforce, the 11th-largest in our study. For every dollar that men make, these Florida tech women earn 93 cents – the ninth-smallest gender pay gap overall. Jacksonville, however, finishes in the bottom half of this study with a slower tech industry growth of 17% from 2016 to 2019.

Long Beach, California is the only city in the entire study where women in tech make more money than men. They reversed the gender pay gap by earning $1.01 for every dollar that men earn. The tech industry in this California city has seen steady three-year growth, ranking 14th out of 63 with a 27% increase from 2016 to 2019. Long Beach women make up 25.4% of the city’s tech workforce and have an income of $55,640 after housing.

Sacramento, California may not stand out as an obvious destination for tech workers, but women make up 37.8% of its tech workforce, the third-largest in our study. That said, pay equity isn’t as high, as women in the industry earn only 88 cents for every dollar that men make. The Sacramento tech workforce has grown 32% in the three years from 2016 to 2019, the ninth-highest increase across all 63 cities in the study. Women tech workers in the city have an income of $46,289 after housing.

Women in Philadelphia, Pennsylvania make up 28.5% of the city’s tech workforce, the 15th-largest rate for this metric in the study. Their income is $52,530 after housing, and they have the 13th-smallest pay gap overall, earning 91 cents for every dollar that their male peers make. The city’s tech workforce has seen a 23% increase in the three-year period from 2016 to 2019, ranking towards the middle of the study for this metric.

While women in Chandler, Arizona make up 28.1% of the city’s tech workforce – the 18th-largest in the study – they rank towards the middle of the study for gender pay gap, earning 85 cents for every dollar that men make. Chandler’s tech industry has seen a 23% growth from 2016 to 2019. Women in the city have an income of $60,269 after housing.

Atlanta, Georgia rounds out the final place in our top 15. Tech employment has grown 33% over the three-year period from 2016 to 2019, the eighth-fastest in our study. Women in Atlanta tech earn 88 cents for every dollar that men make, placing it in about the top third of the study for that metric. Women in Atlanta make up 27.1% of the tech workforce and have an income of $52,594 after housing.

To find the best cities for women in tech, SmartAsset looked at data for cities that had at least 200,000 residents in 2019 according to Census Bureau data. We removed cities from our data set that did not have statistically reliable data (i.e. the margin of error for average earnings for women who work in tech or the number of women working in tech was greater than 20%). Those two constraints left us with 63 cities, which we compared across the following four metrics: