The Best Cities for Diversity in STEM in 2015 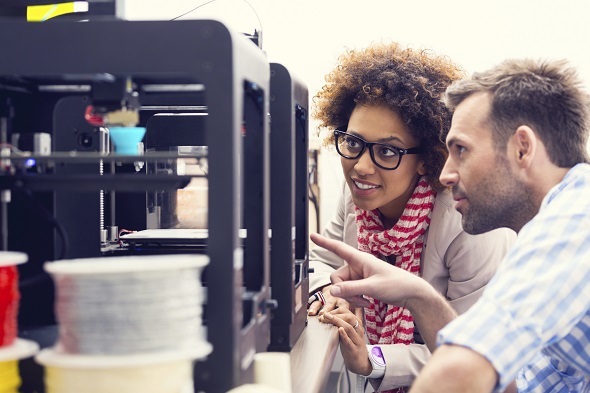 Jobs in science, technology, engineering and mathematics (STEM) represent some of the best opportunities for workers in today’s economy. The work can be rewarding as well as coming with high pay and good benefits (like a 401(k) and health insurance). Diversity in STEM, however is a problem, one that has captured the attention of CEOs like Jeff Bezos and policymakers including the president himself.
This is the 2015 version of our Study. Read the 2016 version here

The solutions pursued in both the public and private sectors are varied – from companies enacting inclusive hiring policies to federal programs like “Educate to Innovate,” which among other things has aimed to increase the number of minorities pursuing a STEM education. However, while STEM diversity is a national problem, it isn’t equally severe in all parts of the country.

For each city, we calculated an index score based on the distribution of the workforce among the eight primary racial and ethnic groups tracked by the U.S. Census Bureau.2 The more evenly spread a city’s workforce was among these eight groups, the higher the score.3

The city with the most racial and ethnic diversity was Fresno, California. It received a 100. Any city with 100% of its STEM workforce concentrated in a single racial or ethnic group scored a zero.

Next, we calculated a similar score based on gender diversity. A city with a STEM workforce equally split between men and women would receive a 100 for this score, while a city in which women made up 10% or less of the STEM workforce scored a zero. 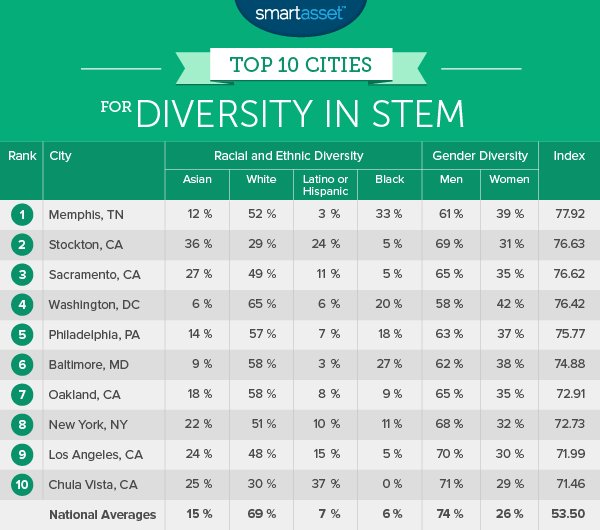 According to the U.S. Census data SmartAsset analyzed, women make up just 26% of the national STEM workforce (there are 5.6 million men holding STEM jobs in the U.S. compared with 1.95 million women). In Memphis, the gap is far smaller, with women making up 39% of the city’s STEM workforce, 7th highest in our study. Memphis likewise scored well for racial diversity. The city’s STEM workforce is 52% White, 33% Black, 12% Asian and 3% Latino or Hispanic.

Just 80 miles east of Oakland, Stockton is rarely discussed as a destination city for STEM workers. It doesn’t have the big name employers that have made the Bay Area the tech capital of the world. Yet it does offer STEM workers one thing many Bay Area cities do not: diversity in the workplace.

No single racial or ethnic group comprises more than 40% of the STEM workforce in Stockton. Compare that with San Francisco where White people fill nearly 60% of all STEM jobs or San Jose where the STEM workforce is 58% Asian and 29% White. Overall, Stockton had the second highest level of racial and ethnic diversity of any city in our study.

California’s capital city has the third most diverse STEM workforce in the U.S. Women fill 35% of STEM jobs in Sacramento (compared with a national average of 26%) and no single racial or ethnic group comprises a majority of the STEM workforce. That type of diversity means a more inclusive atmosphere for all STEM workers and it means a greater range of perspectives – and ideas – at STEM employers. That’s not just good for the workforce, studies show it’s good for business too.

As SmartAsset covered earlier this year, Washington, D.C. is the nation’s top city for women in technology, with women filling a greater proportion of tech jobs in the District than in any other U.S. city. What’s true for technology appears to be true in science, engineering, and mathematics as well. 42% of STEM jobs in D.C. are held by women, compared with a national average of 26%.

Like Washington, D.C., Philadelphia ranked among the best cities for women in tech and has a far higher level of gender diversity in its STEM workforce than most U.S. cities. The same is true of Philly’s racial and ethnic diversity in STEM. For example, while Black Americans make up just 6% of the national STEM workforce, in Philadelphia they hold 18% of STEM jobs.

Baltimore’s STEM workforce rated well for gender diversity as well as racial and ethnic diversity. 38% of STEM professionals in Baltimore are women, 13th highest of any city in our study and well above the national percentage.

With a STEM workforce of over 160,000 people, New York is home to the highest number of STEM professionals of any U.S. city. It is one of just a handful of cities in which four different racial or ethnic groups comprise at least 10% of the STEM workforce. It also offers more opportunities for women in STEM than most U.S. cities, with women holding 32% of STEM jobs in NYC.

Moving to NYC? Find out if you’re better off renting or buying.

Los Angeles is one of the most diverse cities in the world, a fact reflected in its STEM workforce. Of LA’s 76,500 STEM workers, about 36,000 are White, 18,000 are Asian, 11,000 are Latino or Hispanic and 3,600 are Black. Overall, Los Angeles ranked eighth in SmartAsset’s study for the racial and ethnic diversity of its STEM workforce.

Located south of San Diego just miles from the Mexican border, Chula Vista was one of a handful of cities in our study in which no single racial or ethnic group comprised a majority of the STEM workforce. Latinos form the largest single demographic group of STEM professionals in Chula Vista, accounting for 37% percent of the city’s scientists, engineers, mathematicians and technologists.

Read the 2016 version of SmartAsset’s study of the best cities for diversity in STEM.

1. We only considered cities with a large enough STEM workforce to have statistically reliable Census survey results. That included every U.S. city with a population of over 250,000 except for Toledo, Ohio and Newark, New Jersey.

2. While we included the eight primary racial and ethnic groups tracked by the U.S. Census Bureau in our analysis, our tables show only the four largest.

3. To calculate spread, we took the sum of squares of each group’s share of the overall population. We then indexed that number to 100.