How Did the Trump Tax Bill Affect Itemized Deductions? – 2021 Study 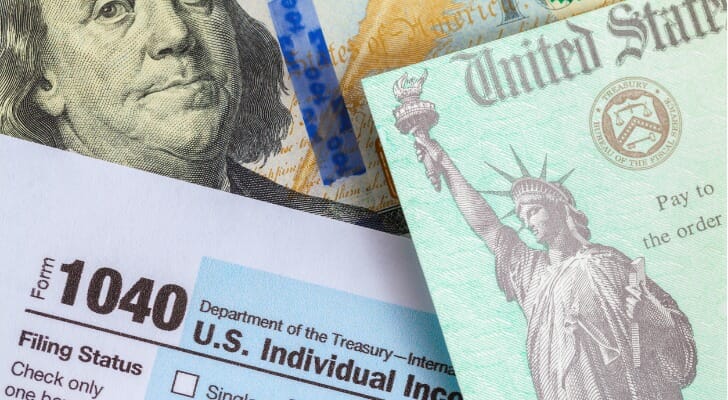 The Trump tax bill – formally known as the Tax Cuts and Jobs Act (TCJA) – nearly doubled the standard deduction while also limiting some itemized deductions. From 2017 to 2018, the standard deduction rose from $6,350 to $12,000 for singles, from $12,700 to $24,000 for married couples filing jointly and from $9,350 to $18,000 for heads of household. Additionally, the bill capped state and local tax deductions at $10,000, lowered the mortgage interest deduction and eliminated deductions for casualty losses and miscellaneous expenses.

With the bill’s passage, researchers theorized that these changes would compel taxpayers to switch from itemizing deductions to taking the new higher standard deduction. In this study, we used recently published IRS data to take a closer look at the extent to which Americans switched their itemization statuses. Specifically, we looked at how the distribution of returns claiming itemized deductions changed from 2017 and 2018 and how the share of itemizers changed in different states. For details on our data sources and how we put the information together to create our findings, check out the Data and Methodology section below. 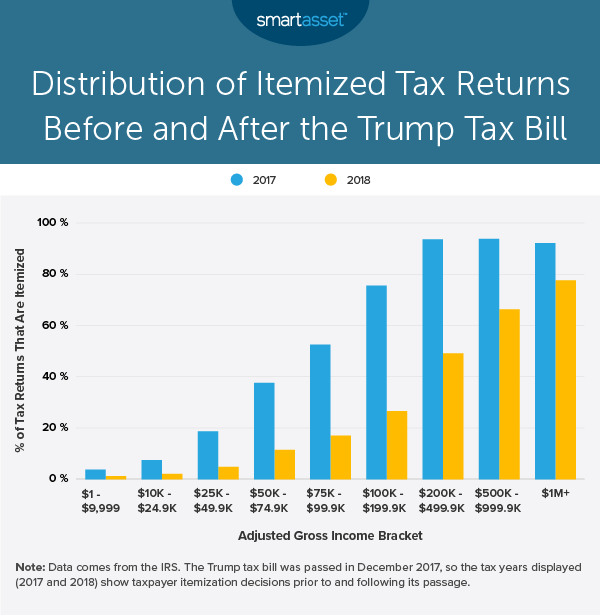 States With the Largest Decreases in Itemized Tax Returns 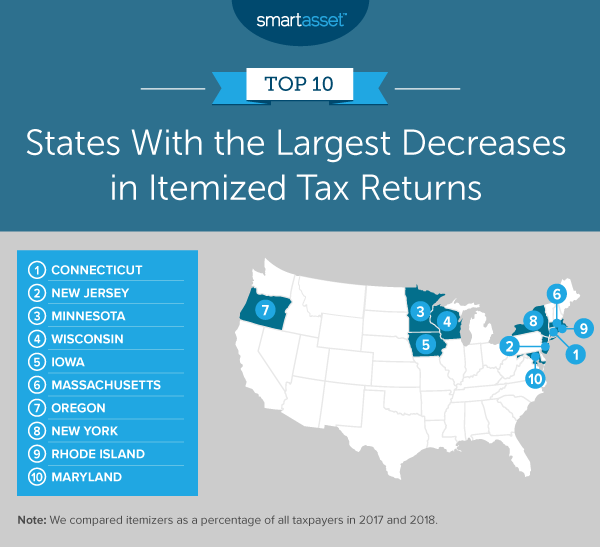 Connecticut ranks as the state with the largest drop in the percentage of itemizers between 2017 and 2018. In 2017, more than four in 10 taxpayers in Connecticut itemized their federal taxes, but in 2018, that figure fell to 15.15%. In other words, more than one in 10 taxpayers changed their itemization status between the two years.

In addition to Connecticut, four other Northeast states – New Jersey, Massachusetts, New York and Rhode Island – rank in the top 10 states with the largest decreases in the share of itemizers. Many of those states saw large decreases because they have a high percentage of upper-middle-class earners relative to other states. According to 2018 IRS data, almost 7% of taxpayers in Connecticut, New Jersey and Massachusetts earned between $200,000 and $500,000. This is higher than the 5.19% national average for other taxpayers. Though Rhode Island bucks the trend, New York also falls higher than the national average with 5.97% of filers earning between $200,000 and $500,000 in 2018.

Beyond Northeastern states, three Midwestern states saw large decreases in itemizers relative to all taxpayers: Minnesota, Wisconsin and Iowa. From 2017 to 2018, the share of itemizers decreased by more than 23 percentage points in all three states. Less than 8% of taxpayers in both Wisconsin and Iowa itemized their taxes in 2018.

States With the Smallest Decreases in Itemized Tax Returns 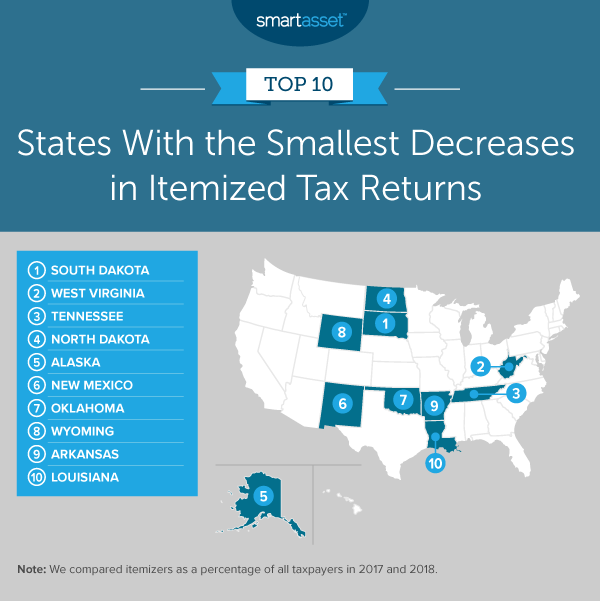 Southern, Midwestern and Western states make up the top 10 states with the smallest decreases in the share of itemizers. South Dakota saw the smallest change between the two years, with a decrease of 12.97 percentage points. In 2017, about 18% of filers in South Dakota itemized deductions, compared to less than 5% in 2018. West Virginia – the state with the second-smallest decrease in itemizers as a percentage of taxpayers – had the lowest rate of itemizers in both 2017 and 2018, with only 17.42% and 4.32% of residents, respectively, choosing not to take the standard deduction.

The four other Southern states include Tennessee, Oklahoma, Arkansas and Louisiana, while the four other Midwestern and Western states include North Dakota, Alaska, New Mexico and Wyoming. As previously noted, residents must match their federal and state itemization status in Oklahoma and New Mexico. Additionally, all 10 states with the smallest decreases in the share of itemizers have fewer upper-middle-class earners than the national average (5.19%). In 2018, the average percentage of taxpayers earning between $200,000 and $500,000 across those 10 states was 3.65%.

All data for this report comes from IRS. To find the states with the largest and smallest decreases in the share of itemizers, we compared itemizers as a percentage of all taxpayers in 2017 and 2018. We then calculated the percentage point difference between those two figures.