Congressional Districts Where Seniors Are Prepared for Retirement 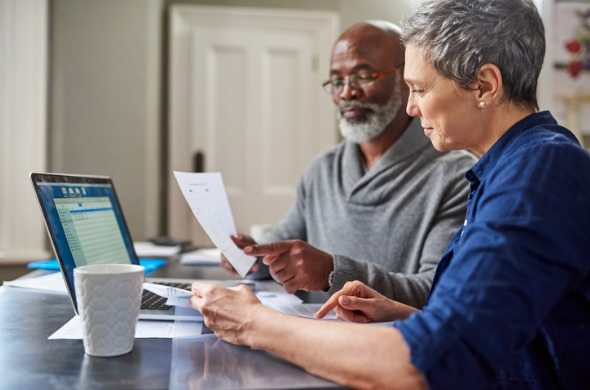 Before the recent tax bill was passed, there was some discussion around lowering contribution limits on retirement accounts. While no changes on contribution limits made it to the final version of the bill it does lead us to wonder which congressional districts would have been affected the most. Below we look at data on retirement income other economic indicators for seniors to see where they are in the best position to enjoy their golden years. 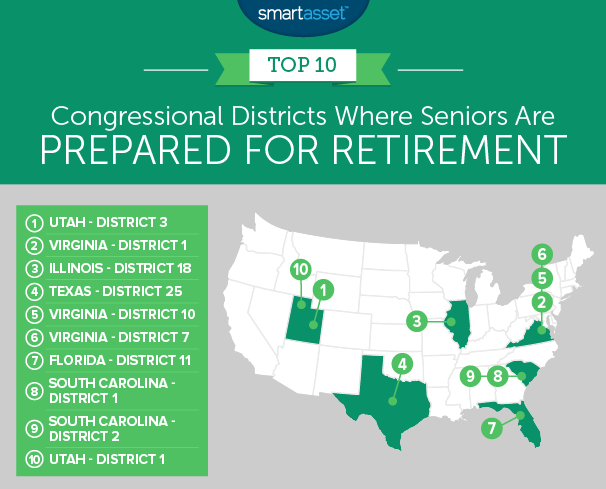 Utah’s third district tops our ranking. This is a Republican-leaning district currently represented by John Curtis. According to Census Bureau data, 90% of seniors here own their homes, the second-highest rate in our study. Homeownership is good for seniors looking to retire. It means long-term housing costs are kept low.

The average senior household here has a combined income of $64,600 between Social Security income and private retirement income. For that metric, this district ranks seventh.

Seniors in Virginia’s first district have an average retirement income over $60,000, good enough for 14th in that metric. Most seniors here have kept an eye out for their retirement. Just under 60% of senior households have some retirement income, a top 20 score.

Illinois’ 18th congressional district lies in central and western Illinois. It covers Jacksonville, Quincy and parts of Bloomington and Peoria. This district has been represented by a Republican in Congress since 1939.

It has the lowest percent of housing cost-burdened seniors in the top 10 at 21%. Furthermore around 57% of seniors have some retirement income, a figure which beats 90% of districts in the study.

Texas’ 25th congressional district is located in central Texas and runs from Fort Worth to Austin. It is currently represented by Republican Congressman Roger Williams. The district has some of the lowest rates of senior poverty in our study. Less than 6% of seniors find themselves below the poverty line.

Another impressive metric in this district’s favor is the fact that less than 4% of senior households rely on food stamps, a score which beats 90% of congressional districts in this study.

Despite the high incomes, housing costs in this district can be a burden. Around 31% of senior households spend more than 30% of their income on housing.

Virginia’s seventh congressional district is another one which leans Republican. President Trump won the district by 6% in 2016. Around 59% of senior households here have some retirement savings. For that metric, it ranks 30th.

While seniors here don’t earn quite as much retirement income as seniors in the Virginia districts ranked above, it still scores above-average in that metric. According to our data, the average senior household here has just under $53,000 in retirement income and Social Security income.

Florida’s 11th district takes the seventh spot. This is a district of 758,000 residents represented by Republican Congressman Daniel Webster. Over 91% of senior households here own their homes, the most in the study. Seniors also manage to keep housing costs under the affordability line, on average. According to Census Bureau data, less than 23% of seniors are housing cost-burdened.

The average retired household here has about $58,000 in retirement income, a top 25 score. Another metric in this district’s favor is the homeownership rate among seniors. According to our data, over 86% of seniors own their home.

As mentioned in the last blurb, it is a close race between two South Carolina districts for the eighth and ninth spot. This district has been represented by Republican Congressman Joe Wilson since 2001. South Carolina’s 2nd district has a relatively low number of housing cost-burdened seniors. Census Bureau data shows that only 24% of senior households here spend over 30% of their income on housing.

This district also scores well in homeownership rate for seniors. Our data shows over 86% of seniors own their home.

One metric where this congressional district lags behind others in the top 10 is in average retirement income. Between Social Security and retirement income the average senior household here has about $48,000. That is an average score compared to other districts. 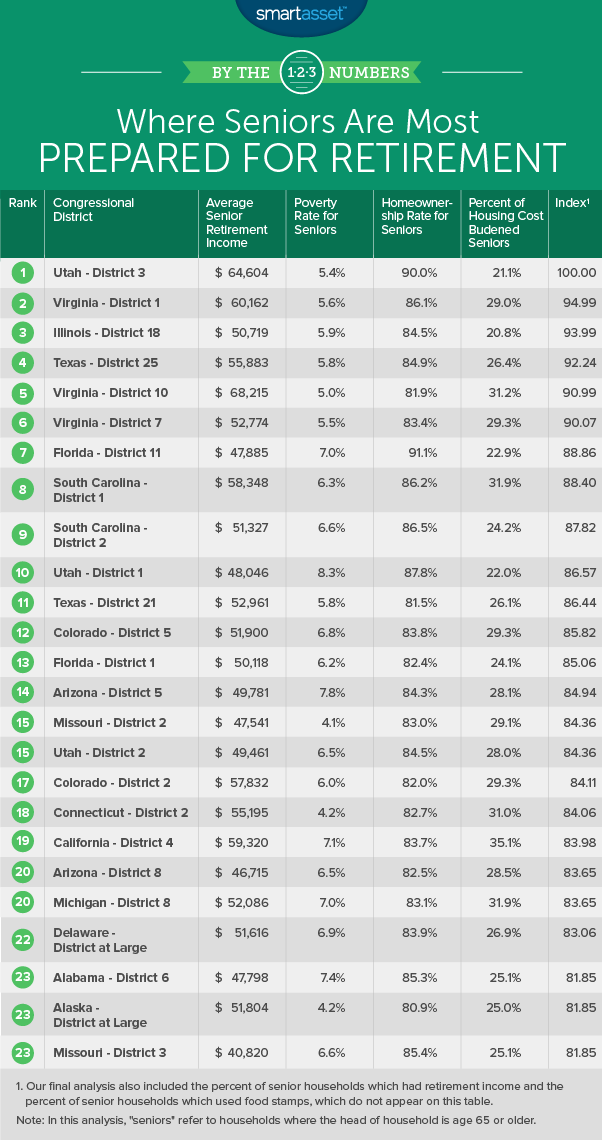 Tips for Hitting Your Retirement Goals

Ensuring a secure retirement involves saving early and saving often. The earlier, and the more often, the better.

Here is an example: let’s say you are a 30-year old living in New York earning $55,000 per year and have $10,000 saved. Are you on pace for a secure retirement? Well if you managed to save 15% of your income per year, invested it with an average rate of return on investment of 4%, took Social Security at 65 and cut retirement expenses to $3,000 per month, our retirement calculator estimates that you will be on track to meet your retirement goals.

In that above example there are a few variables. Some, like Social Security election age, you have control over. Others, like retirement expenses, savings rate and average rate of return, you have some but not total control over. Despite not having full control over these variables there are ways to make the math lean in your favor. For example, when it comes to investing your assets it can make sense to hire a financial advisor. Financial advisors come with a range of skills, from estate planning to asset management. Finding the right advisor can help you get on a path to hitting your retirement goals.