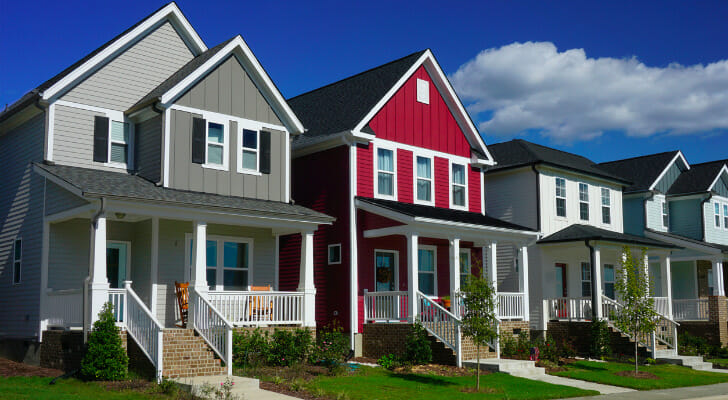 Many Americans see housing as a more preferable investment when compared to the stock market, according to recent survey data from the Federal Reserve Bank of New York. Of respondents surveyed in 2020 and 2021, more than 90% would buy a house as a primary residence over investing in the stock market and more than 50% would invest in a rental property over the stock market. High housing demand throughout the coronavirus pandemic is also evidenced by Census Bureau and National Association of Realtors data. From February 2020 to February 2021, new homes sales increased by 8.2% and existing home sales rose 9.1%.

In this study, SmartAsset identifies the top 10 rising housing markets leading up to COVID-19. We analyzed 321 cities and compared them across the following metrics: difference between population growth and housing unit growth, four-year change in median home value and four-year change in median household income. For details on our data sources and how we put all the information together to create our final rankings, check out the Data and Methodology section below.

This is SmartAsset’s fifth annual study of the top 10 rising housing markets. Check out the 2020 version here. 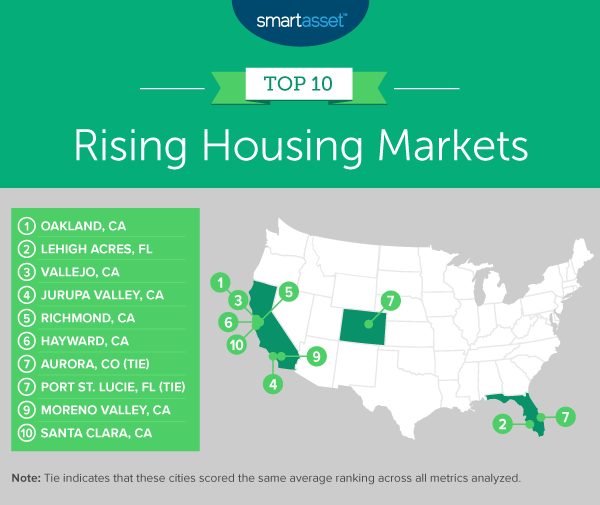 Oakland, California is the fastest-rising housing market in this study. This city’s population has grown 2.88 percentage points faster than the number of housing units, ranking 46th for this metric on our list. Oakland’s median household income has grown 34.92% over that time period, placing fourth in the study.

Lehigh Acres, is the first out of two Florida cities in the top 10 (and one of only three located outside of California). This city’s population has grown 11.53 percentage points faster than the number of housing units, ranking first for this metric in our study. Lehigh Acres also has the highest four-year change in home value (79.95%), but ranks outside of the top quartile in the four-year change in median household income (20.53%).

Vallejo, California has the fourth-highest four-year change in median home value out of all the cities that we analyzed, jumping 59.69% from 2015 to 2019. This city’s population has also grown 4.85 percentage points faster than the number of housing units, which is the 19th-biggest change on our list.

Richmond, California has the ninth-highest jump in median home value out of all the cities that we analyzed, jumping 55.97% from 2015 to 2019. This city also has the 41st-highest increase in our study for household income, jumping 24.26% during that same time period.

Hayward, California has the fifth-highest change in median home value, 59.41% in the four-year period from 2015 to 2019. And this city also has the seventh-biggest increase in median household income, going up 33.26% over those four years.

Aurora, Colorado is the second of only three cities in our top 10 that is located outside of California. It has the 17th-biggest four-year change in median home value, jumping 53.36%. And this city’s population has grown 3.24 percentage points faster than the number of housing units, which ranks 41st on our list.

Port St. Lucie is the second city in our top 10 that is located in Florida. It has the 21st-highest four-year change in median home value (increasing 51.13% from 2015 to 2019). And this city’s population has grown 4.54 percentage points faster than the number of housing units in that time period, ranking 23rd for this metric.

Moreno Valley, California’s population has grown 4.78 percentage points faster than the number of housing units, ranking 21st in our study. And this city also has the 27th-biggest change in median home value, increasing 49.78% in four years.

Santa Clara, California rounds out the top 10 with a 53.50% increase in home value over the past four years, the 14th-biggest jump in this study. And this city also has the 19th-biggest change in median household income, going up 27.39%.

To find the top rising housing markets, we looked at data for the 321 U.S. cities with a population greater than 100,000 in 2019. We analyzed this information across the following three metrics:

Data for all metrics comes from the Census Bureau’s 2015 and 2019 5-year American Community Surveys.