The States with the Most 2016 Olympic Medals

The Summer Olympics. It’s that event that comes every four years and enthralls Americans with dancing horses, synchronized swimmers and whatever that sport is which takes place in the velodrome. This version of the summer Olympics, Rio 2016, was certainly a successful one for American athletes. Katie Ledecky became a household name and Michael Phelps finished the final lap on his illustrious swimming career. Americans “won” the Rio 2016 Olympics with medals in 121 total events.

However, we at SmartAsset were not satisfied with just knowing that Americans were the best athletes in the world. We wanted to see which states contributed the most to the American victory. 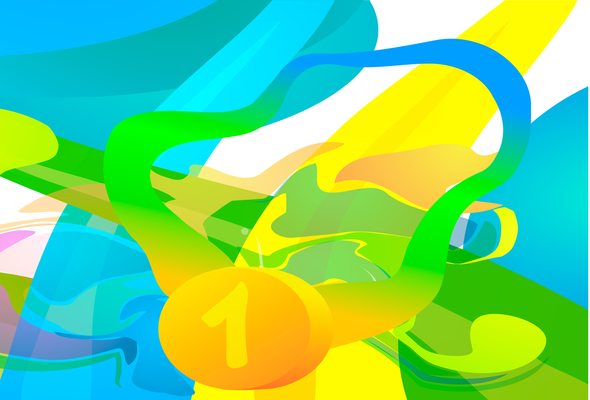 To figure out which states won the most medals we tracked every event to see which Americans won what. We then recorded their birth state and medal. To get the most accurate figures we kept track of every single medal earned, not just events won.

The difference is that for relays and team sports the event only results in one medal in the IOC tally but every member of the team receives their own medal. For example, the U.S. Men’s Basketball team won gold which gave team USA one gold medal in the official tally but there are 12 Olympians making their home states proud.

We wanted to include them all. In short, we tallied every single medal given to an American at the 2016 Rio Olympics. To take into account population size of a state, we divided this total number of medals by the population of the respective state and then multiplied by 10,000. This gave us the top ten states to produce the most medals per 10,000 residents. Please read below to get a full description of how we did our analysis.

It only takes one fish. Of D.C.’s 6 Olympic medals, 5 were won by part-fish part-human Katie Ledecky. Of Maryland’s 13 medals, Phelps won 6. Both D.C. and Maryland landed in our top 3.

Dominant swimming. Thanks to a combination of numerous events and relays, the U.S. won 70 of their 262 medals in swimming. Perhaps only basketball can compare where the U.S. won every possible medal (though the overall number is still lower). 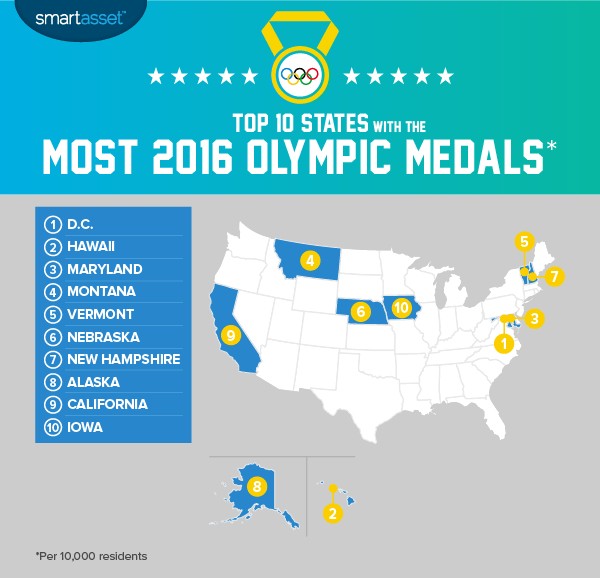 There were only two American athletes born in D.C. who won medals: Kevin Durant and Katie Ledecky. In fact, of the 6 events the pair entered they won medals in all 6. Katie Ledecky smashed the Women’s 800m Freestyle with a 8.04.79 world record. Kevin Durant, meanwhile, scored 30 points in the U.S. Men’s Basketball final to lead team USA to the gold over Serbia.

Hawaii comes in second with two golds and four bronzes. Hawaii was represented in a wide variety of sports including team dressage, men’s indoor volleyball, swimming and women’s volleyball. Hawaii can thank the three members of the men’s indoor volleyball who were born in the state for their inclusion in our top 10. Kawika Shoji, Erik Shoji and Micah Christenson were important members of the Men’s Indoor Volleyball team which beat Russia in a 5-setter to win the bronze medal.

Related article: The Cost of Living in Hawaii

As previously mentioned, Phelps would undoubtedly be the captain of Maryland in any Olympics of American States. But Maryland is not just about Phelps. Maryland had many different medalists like Matthew Centrowitz, Jr. (who won gold in the Track and Field Men’s 1500M) and Helen Maroulis (who earned gold in the Women’s Wrestling Freestyle 53kg).

Similar to Hawaii, Montana doesn’t have a ton of medals but it doesn’t have a ton of people either. So when it comes to most 2016 Olympic medals per 10,000 residents, the state does well. Cody Miller, the breaststroke specialist, earned both of Montana’s medals at the 2016 Rio Olympics. One was in the Men’s 100m Breastroke and the other was in the Men’s 4×100 Medley Relay.

Olympians born in Vermont won only one medal, but again because of the very low population it compares well with other larger states on a per 10,000 residents basis. Laura Graves brought home Vermont’s only medal in Team Dressage when she and the rest of the team earned a bronze.

Two medalists, two medals and two golds. That is how efficient New Hampshire was at the Rio 2016 Olympics. New Hampshire has two members of the Women’s Coxed 8 team. This rowing  team has won 11 straight national titles, including gold at this year’s Olympics.

It may be surprising to see Alaska rank so high in the summer Olympics, but with one medal and a population of only around 740,000, the state comes in 8th on our list. Their one Olympian is Corey Cogdell-Unrein, who was born in Palmer, Alaska. She won the bronze in Women’s Trap Shooting.

California managed to overcome its massive population of 40,000,000 to crack the top 10. Olympians born in California earned 27 gold, 9 silver and 16 bronze for a total of 52 medals. Swimmer Madeline Dirado and runner Allyson Felix did a lot of the heavy work with a combined 7 medals between them. In total, California had 44 different people earn medals.

Rounding out the Top 10 States with the Most 2016 Olympic Medals is Iowa. Iowa earned four total medals from four different Olympians. Iowa won 1 gold, 1 silver and 2 bronze medals.  Harrison Barnes of the U.S. Men’s Basketball Team was the gold medal winner. In the games where Barnes played the U.S. won by an average of 39.5 points, in games where Barnes did not play the U.S. team only won by an average of 5.5.

In order to come up with the ranking for U.S. States with the Most 2016 Olympic Medals we kept track of every medal earned by USA Olympic team members, including tallying team members of team events. Part of this tally also includes people who competed in heats of relay races but not necessarily in the final. Since they are also given medals we counted them for our study.

We then tallied all the medals earned by all the different medalists by state of birth. Some medalists may have different hometowns than their birthplace. We then divided this total number of medals by the population of the respective state and then multiplied by 10,000 to get the number of medals won by Olympians in that state per 10,000 residents.

The population size of states came from the U.S. Census Bureau. Information on medals won and athlete birthplace came from the Team USA website.