The Best Cities for Coffee Fanatics 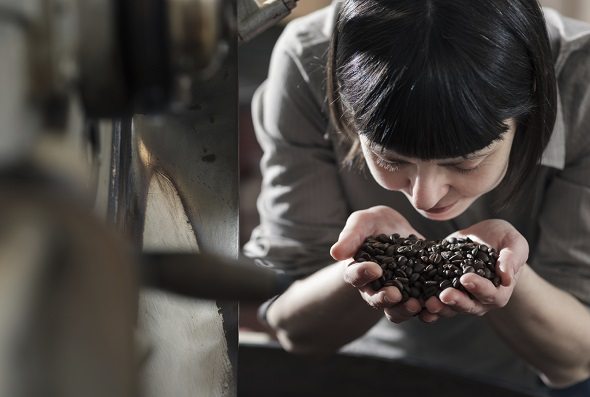 In 2016 it’s hard to fall over in a U.S. city without hitting a coffee shop. Thanks in part to chains like Tully’s, Dunkin Donuts, Caribou Coffee and Starbucks, the amount of coffee shops across the U.S. seems to have grown exponentially in recent years. Starbucks, for example, increased from 165 stores in 1992 to more than 22,500 stores today – on average, that’s more than one new store a day for 23 years straight.

This is the 2016 edition of this study. Click here for the 2017 edition of the Best Cities for Coffee Fanatics.

It isn’t just the chains that are spreading, however. Despite the added competition from those billion-dollar brands, specialty cafes and coffeehouses are flourishing in many parts of the country.

Indeed, for some coffee lovers, the quality of the stuff churned out by Starbucks and its ilk simply does not suffice. In addition to high-quality beans, the perfect cup of joe requires the personal touch of a smaller operation.

To find the best cities for coffee fanatics, SmartAsset looked at data on cafés, coffee shops and coffee roasters in the 100 largest U.S. cities. We considered factors such as the overall availability of coffee, the total number of coffee roasters and the number of top-end cafés or coffeehouses.

We also looked at the price of coffee in each city and the overall level of coffee enthusiasm as measured by Google search volume. (Read more about our methodology below.)

Find out now: What are the best cheap coffee brands? 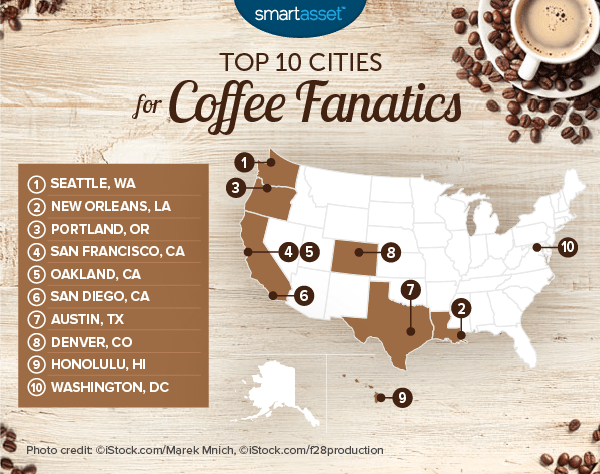 With its long, gloomy winters, Seattle is a city that all but insists on high levels of coffee consumption. The result has been one of the world’s truly glorious coffee cultures. While the city is known as the birthplace of big chains like Tully’s and Starbucks, it is Seattle’s legion of neighborhood cafés and coffeehouses that make it special. Indeed, many Seattle coffee fanatics prefer the brew at places like Ballard Coffee Works, Analog Coffee, Elm Coffee Roasters or Herkimer Coffee, to any of Starbucks’s roasts.

Regardless of your personal preferences, you shouldn’t have any problem finding what you need in Seattle. The city has more than 1,600 cafés and coffee shops, or about 253 per 100,000 residents. That’s the third-highest concentration of coffee sellers of any major U.S. city.

Want to move to Seattle? Here are a few things to keep in mind.

In fact, of the six metrics we considered, Seattle ranked in the top six on all but one – price. Perhaps owing to the highly refined tastes of its inhabitants, coffee products in Seattle can be fairly expensive. The average price of a cappuccino is nearly $4, according to Numbeo.com.

New Orleans has long been one of the world’s busiest coffee ports and it remains the leading U.S. importer of java, bringing in about 250,000 tons of coffee every year. That large supply of coffee has a downward effect on local prices. Of America’s largest 100 cities, New Orleans boasts the fourth-lowest espresso price. A cappuccino in the city costs $3.17 on average, a full dollar lower than the average price in New York City.

The city is more than a simple exporter of beans, however. It also has a rich history of brewing and drinking great coffee. Its signature beverage is the chicory cafe au lait, which as the name suggests includes chicory and milk. The most famous brewer of that concoction is the French Quarter’s Café du Monde, but there are hundreds of small cafés and coffee shops serving high-quality coffee throughout the city’s 13 districts.

For coffee fanatics seeking a truly perfect cup of coffee, Portland may be the place to start looking. The city has more highly-rated cafés and coffeehouses than any other U.S. city. In total, 28 Portland coffee shops are rated as 4.5-star or 5-star establishments on Yelp, according to SmartAsset’s research.

The city also has the highest number of coffee and tea manufacturers (which includes coffee roasters but does not include cafés that roast their own beans). It has 12 such businesses, the same number as New York City. Perhaps the city’s most famous coffee roaster is Stumptown, which over the past decade has opened cafés in Seattle, New York and Los Angeles while selling its beans to cafés in just about every city on this list.

The City by the Bay has a long history of coffee production and consumption. It is the birthplace of one of the world’s most recognizable coffee brands in Folgers, which was founded in San Francisco in 1850. Other major coffee companies that originated in San Francisco include Hills Brothers Coffee and MJB Coffee.

Today’s San Francisco coffee culture places more emphasis on cafés and coffeehouses than those “first-wave” coffee brands. In fact, with more than 300 coffee shops per 100,000 residents, San Francisco boasts the highest concentration of such businesses of any U.S. city in our study.

While Oakland doesn’t have quite the concentration of coffee shops as the city at the other end of the Bay Bridge, it has nearly has many highly rated cafés and coffeehouses. With a total of 18 cafés rated as 4.5 stars or higher, it ranks tenth in the country for that metric.

In addition to many unique coffeehouses and cafés, Oakland is home to the world headquarters of Blue Bottle Coffee, a coffee roaster and café that has expanded into several California cities, as well as New York and Tokyo. Their single-origin coffee is widely considered some of the best in the U.S.

The coffee culture in San Diego may not yet have the cachet of cities in the Northwest or the Bay Area, but that is quickly changing. The city is home to numerous “third-wave” roasters, both old (San Diego Coffee Co., Bird Rock Coffee Roasters) and new (Coffee & Tea Collective). The city’s 22 top-rated cafés, coffeehouses and roasters rank fourth in the country behind only San Francisco, New York and Portland. (Several other cities, including Seattle, also have 22.)

Austin is known for its unique and imaginative culture, and the Texas capital’s coffee scene is no different. It was Austin’s Cuvée Coffee, for instance, that started the nitro cold brew trend back in 2012. (Nitro cold brew is cold-brewed coffee combined with nitrogen gas and served out of a keg, making it smoother and creamier than a typical cold brew or iced coffee.)

Austin ranked in the top 13 of major U.S. cities on four of the six metrics SmartAsset considered. Google searches for “coffee” in the Austin area are 44% higher than the national average, placing it 11th nationally on that metric.

Thinking about a Texas retirement? Find out how friendly the Lone Star State is for retirees.

Coffee fanatics will not be disappointed by Denver’s many cafés and coffeehouses. The city is home to 22 coffee shops that have a 4.5 or 5 star rating on Yelp, the fourth-highest number of highly rated cafés of any U.S. city (tied with San Diego and Seattle).

There is only one U.S. state that has the climate to grow its own coffee beans, and it isn’t Alaska! Known as Kona coffee, Hawaii’s homegrown beans have a unique flavor owing to the climate and soil in which they are grown. Due to their limited supply, however, they are quite expensive (as are many products in Hawaii).

For that reason Kona coffee is commonly mixed with coffee from other parts of the world to create Kona blends. State law requires the blends to be labeled, so if you want to taste pure Kona, make sure you’re drinking 100% Kona coffee.

Like many of the cities on this list, the District’s coffee offerings have expanded rapidly in recent years, with a multitude of new coffee shops opening (many of them to rave reviews). Today D.C. has more than 1,000 coffee shops and cafés, about 166 per 100,000 residents. That’s the eleventh-highest concentration of coffee-selling establishments of any U.S. city. 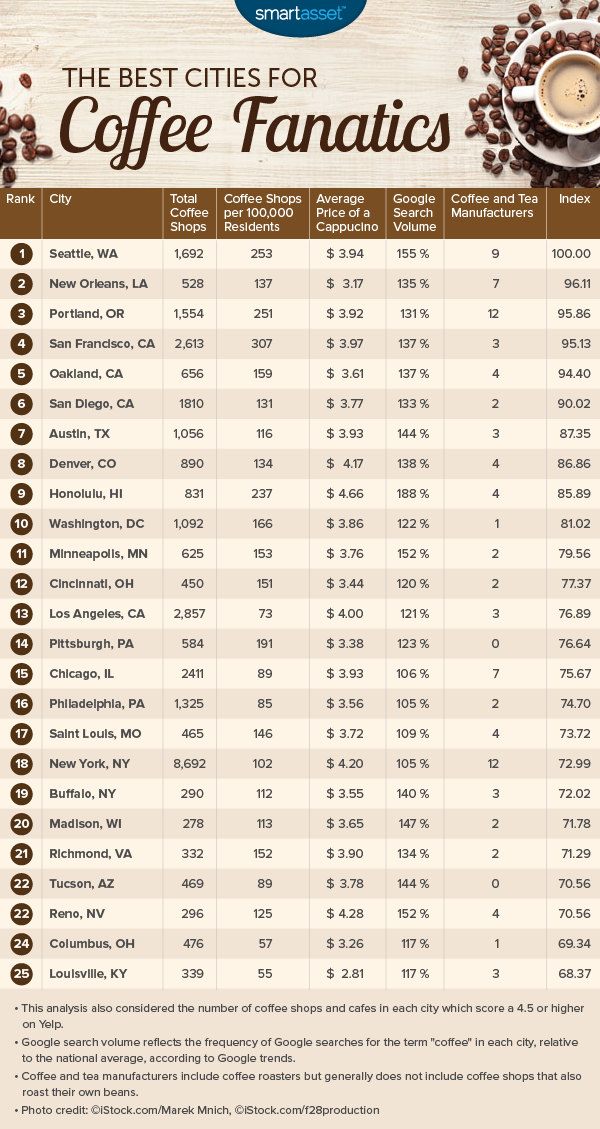 To find America’s top coffee cities, SmartAsset gathered data on the 100 largest U.S. cities. We looked at the following six different metrics of coffee availability, quality and price in each city: