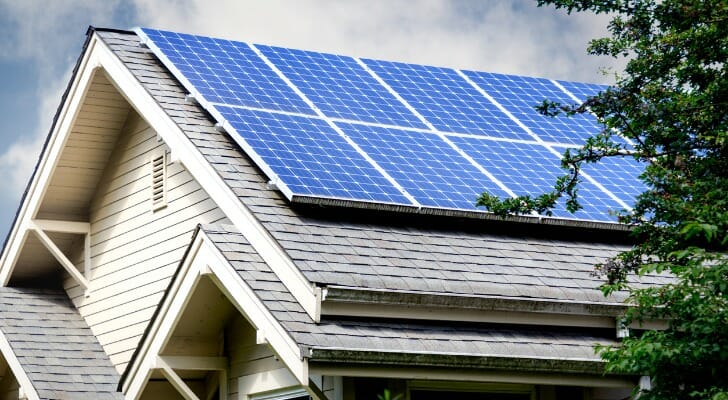 State energy efficiency and renewable energy programs may produce significant benefits for residents including lower fuel and electricity costs, increased grid reliability, better air quality and more job opportunities, according to a 2018 Environmental Protection Agency (EPA) report called “Quantifying the Multiple Benefits of Energy Efficiency and Renewable Energy.” Some states have transitioned to clean energy more quickly than others. For instance, between 2013 and 2017, Utah increased its renewable energy production by 212.29% while West Virginia’s renewable energy production decreased by 22.14%. This can be an important consideration for people when deciding where to buy a home.

In this study, we looked at some of the states leading the charge on renewable energy. Specifically, we compared states across seven metrics related to renewable energy that include both policies and results. For details on data sources and how we put all the information together to create our final rankings, check out the Data and Methodology section below. 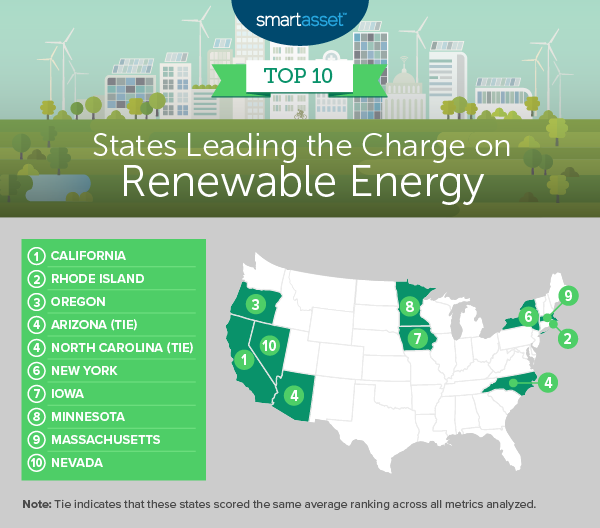 California is the No. 1 state leading the charge on renewable energy. California has the greatest number of policies and incentives that promote renewable energy and energy efficiency of any state. According to the Database of State Incentives for Renewables and Efficiency (DSIRE), which tracks grants, loans, rebates and tax credits by state, there are 218 total policies and incentives encouraging individuals and businesses in California to use more renewables.

Additionally, California has the second-lowest carbon emissions per capita in our study, falling behind only New York, and the ninth-highest increase in renewable energy production over the five-year period from 2013 to 2017. Specifically, renewable energy production increased during those years by 46.29%. In 2016, 9.20 metric tons of carbon were emitted per person in California.

The reduction in carbon dioxide may be a result of Rhode Island’s strong reliance on renewables. According to data from the Energy Information Administration (EIA), in 2017 all energy production in Rhode Island came from renewables. If you’re looking to move or upgrade your home to account for better energy efficiency, be sure to consider Rhode Island property taxes.

Like Rhode Island, Oregon relies almost entirely on renewable energy. In 2017, 99.86% of energy production in Oregon came from renewables, the sixth-highest of any state, falling behind Rhode Island, Hawaii, Vermont, Maine and Delaware, all of which rely solely on renewables. Oregon also has the third-highest number of policies and incentives promoting renewable energy of any state in our study with 146, following California with 218 and Minnesota with 184.

Arizona, tied with North Carolina for the No. 4 spot, ranks in the bottom half of the study in terms of its 2017 renewable energy as a percentage of total energy production, with only 23.94% of energy production coming from renewables. Arizona ranks well, however, across the six other metrics we considered. Five-year renewable energy production increased by 44.81% leading up to 2017 – the 10th-highest percentage increase in the study – and carbon dioxide emissions decreased by 5.71% in the five years leading up 2016 – the 16th-largest percentage reduction in the study. In addition, many cities in Arizona, particularly in the Phoenix area, rank well in our study on  where to buy a family home.

North Carolina ties with Arizona for fourth place in our study on the states leading the charge on renewable energy. Since 2003, the U.S. Department of Agriculture (USDA) has provided funding to states or business owners within the state for renewable energy and energy efficiency projects. One of the top 10 states in our 2019 study of where rich millennials are moving in 2019, North Carolina has received the most funding from the USDA, a total of about $826 million, for clean energy projects and investments. Additionally, the average amount of funding for each program in North Carolina is the fifth-highest in the study, at $599,472.

New York comes in sixth. As noted by the EIA, a large portion of the population in New York lives within the New York City metropolitan area, where mass transit is readily available and multi-family units are prevalent, allowing for efficiency of scale in energy usage. As a result, New York has the lowest 2016 emissions of carbon dioxide per capita, about 8 metric tons, across all states in the study.

Iowa, ranking seventh overall, has the highest carbon dioxide emissions per capita of any state in our top 10. In 2017, 23.36 metric tons of carbon dioxide were emitted per person, the 13th-highest rate across all states. However, the numbers indicate that Iowa is working to reduce carbon dioxide production. Between 2012 and 2016, carbon emissions in the state decreased by 8.78%, the sixth-largest percentage reduction over that period in our study. Potentially lower fuel and electricity costs resulting from this change could significantly affect residents’ mortgage timeline for the better.

Taking the No. 8 spot in our top 10, Minnesota has 184 policies supporting renewable energy and energy efficiency according to DSIRE, the second-largest amount for this metric in the study. These policies seem to be generally successful: In 2017, 71.21% of energy production came from renewable sources, a top-15 rate. Additionally, Minnesota saw an increase in renewable energy production in the five years leading up to 2017, at a rate of 22.31%, ranking in the top half of the study for this metric. What’s more, Minnesota is also one of 2019’s best states for homeowners.

Though carbon emissions in Massachusetts actually increased by 2.96% between 2012 and 2016, only 9.41 metric tons of carbon dioxide were emitted per person in Massachusetts in 2016, the fifth-lowest rate for this metric of any state in our study. Additionally, Massachusetts relies a fair amount on renewable energy sources. In 2017, 57.85% of energy production came from renewables, a top-15 rate.

Nevada rounds out our list of the top 10 states leading the charge on renewable energy. Like North Carolina, Nevada has received a significant amount of funding from the USDA for clean energy projects. Since 2003, it has received a total of approximately $316 million, the fifth-largest amount in the study. The average funding per program, an estimated $2.9 million, is the highest amount of any state. Furthermore, in 2017, Nevada’s renewable energy as a percentage of total energy was 98.36%, the seventh-highest rate for this metric in the study.

To find the states leading the charge on renewable energy, SmartAsset looked at data for all 50 states. Specifically, we compared the states across the following seven metrics: