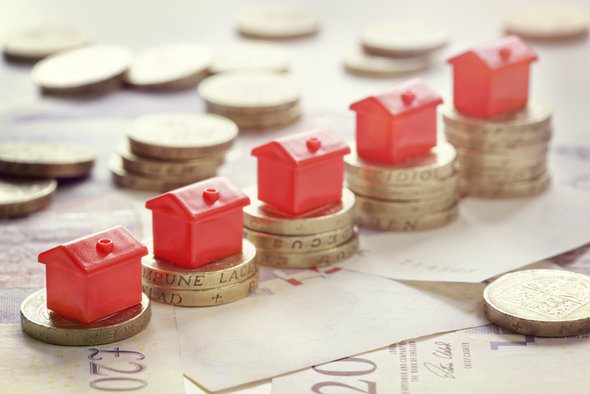 Cities like San Francisco and New York tend to dominate the headlines when it comes to exploding housing markets. But there are plenty of smaller housing markets with tons of potential that don’t get the recognition they deserve. These cities contain many of the right ingredients to become a valuable place to own a home. Read on as we look at data on smaller cities across the U.S. that are home to rising housing markets.

Buying a home? Check out our mortgage calculator.

In order to find the smaller cities with rising housing markets, we looked at data on home values, incomes, population size and housing units. Specifically, we looked at data on each of these factors in 2011 and 2015, and then looked at the percent change. To see where we got our data and how we put it together, read the data and methodology section below. 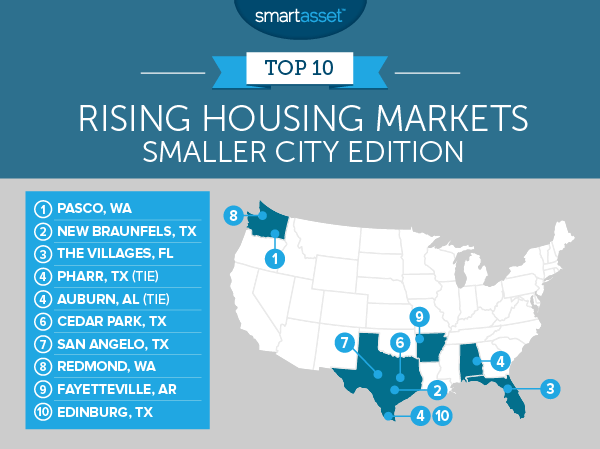 Pasco is located in southeast Washington. The Columbia River and the Grand Coulee Dam, which sits on the river, have made Pasco an agricultural powerhouse. This region, including Pasco, has become center for the Washington wine industry. And people have been attracted to the area’s economic activity. From 2011 to 2015 the population of Pasco jumped almost 18%, but over that same period housing stock only grew 12%, meaning the housing demand may be higher than the supply.

New Braunfels, as you may be able to tell by its name, was originally settled by Germans. This city is home to a few tourist attractions which drive the economy. The German-style festivals held in the town to celebrate its German roots are popular attractions as is the Schlitterbahn Waterpark. In fact, Schlitterbahn is the second-largest employer in the city. From 2011 to 2015, the population rose 9% more than the stock of housing did. This has led housing prices to jump over 10% on average. That gap between new people and new homes may mean home values will keep rising.

The Villages, a huge Florida gated community for persons over the age of 55, is known for being a fun and active place where residents take part in activities like water volleyball, archery and golf. The community has seen impressive growth recently. From 2011 to 2015, housing stock shot up 39% and the population grew by a whopping 44.8%. During that time the Villages residents’ median incomes also grew an astonishing 49%.

Pharr is the second Texas city and the fourth-ranked city overall in our top 10. It is located close to the Mexican border and 90% of its population are Hispanic. From 2011 to 2015, the population of Pharr grew 6% more than the housing stock grew, creating a large demand for housing. Combine that with the almost 19% increase in median incomes in Pharr, and you have the recipe for a rising housing market.

Tied with Pharr for fourth place is Auburn, Alabama. The city of Auburn is located in eastern Alabama and is dominated by Auburn University. The university employs over 5,000 people. From 2011 to 2015, the population grew 7% more than the housing stock did. While that one fact alone is enough to place Auburn on the list of rising housing markets, what is even more impressive is the growth in income. Individual median incomes in Auburn grew 24% from 2011 to 2015, meaning people have extra cash to spend on the housing stock.

Cedar Park is a suburb of Austin, Texas that has benefited from the Texas capital’s recent growth. With the high housing costs in Austin, many people are looking for cheaper housing and Cedar Park fits the bill. The population here jumped almost 30% from 2011 to 2015 outpacing the housing stock, which grew 21% over the same time period. This extra demand for housing led to home values increasing by over 19% on average. Cedar Park ranks second in our study for median home value growth.

The Oasis of West Texas comes in seventh on our list. This city has seen impressive growth in incomes and housing values. From 2011 to 2015, median home values grew 17.58%. That’s the fourth-fastest rate in the study. During that same period median incomes grew 12.88%, which was the 29th-highest rate in the study.

Redmond is best known for being the home of Microsoft. Housing stock in Redmond grew by only 0.82% from 2011 to 2015 – a paltry amount when you consider that the population grew by 9%. Over that same period the city saw median home values grow by 5.41% and median incomes grow by 6.8%. For both of those metrics, Redmond ranks in the top 100.

Fayetteville is home to the University of Arkansas, the largest university in the state. SmartAsset recently found the city is one of the best for working students. Median incomes in Fayetteville grew by around 10% from 2011 to 2015. The population also grew by 8.4%, outpacing the growth in housing stock by 6.3%.

Around 55,000 people call Edinburg, Texas home. The city is also home to a new medical school, University of Texas Rio Grande Valley School of Medicine. Just like in Auburn and Fayetteville, where the higher education complexes support the local economy in a major way, you can expect the new medical school to do the same in Edinburg. From 2011 to 2015, the population grew by 8%. That population increase was 5.5% greater than the increase in housing units, creating an excess demand for housing in Edinburg. 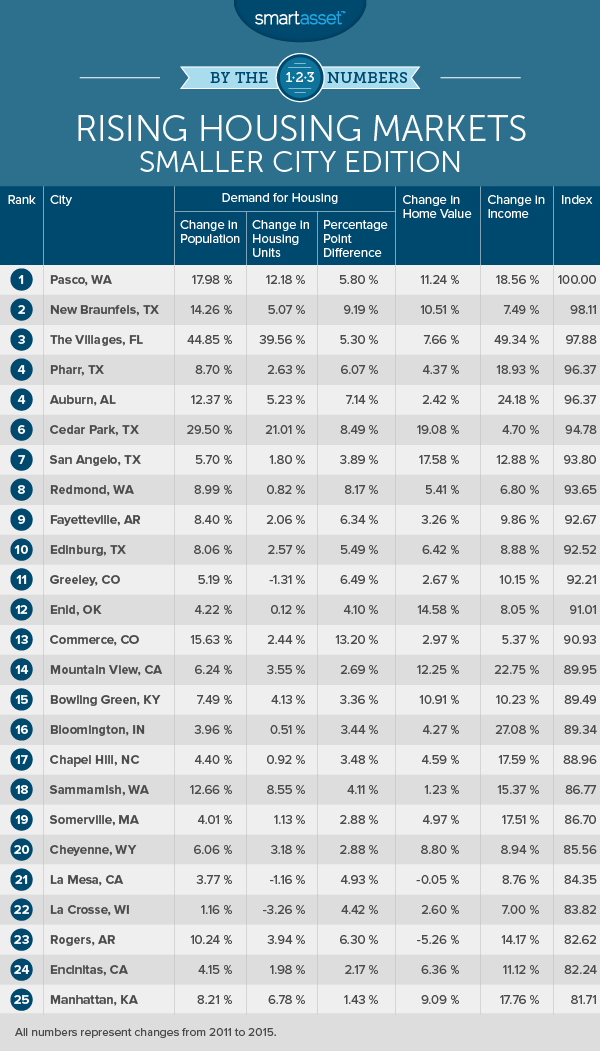 In order to find the smaller cities with the fastest-rising housing markets, we looked at data on 498 cities with populations between 50,000 and 100,000, according to 2015 U.S. Census Bureau’s 5-Year American Community Survey estimates. Specifically we looked at: